Obviously the micro USB socket is a weak component on HP slates. I gave up trying to wade through the HP EPP support website to find out if there was a quarentee for my Slate 10 only 3 months old. Support don't recognise it by part number anyway!  Not good enough quality from HP, although I love my Slate 21 - no micro USB to go wrong on that... So I went off and bought an iPad mainly because it doesn't use micro USB connectors.

Thanks.  I called the UK number. They were aware of the problem with micro USB on HP slates and offered to fix it. My Slate 10 is only 3 months old so is still covered by warranty; so that's good.

I have a HP Slate 7 2800.  The charging port on this device was loose, preventing it from charging.  While under warranty, they were very good at replacing it.  But, the port has finally broken.  Of all the devices we have had over the years, this has never been a problem.  My HP laser jet 1100 from the 90's is still working.  That was why I bought the hp tablet.  I don't understand how they could not address this issue, when people will be charging it often.  (I didn't even use the tablet daily.)

So I am looking to buy two tablets now, but am afraid to buy one from HP.  Enjoyed all the rest of the features of the tablet except for the charging issue.  (It was mainly for my kids use.)  It was not broken from abuse.

I agree with all you have written. Many of us HP loyalist have had the same problem. If your tablet is still in warranty, then you've got resolution.  Mine was a few months out of warranty. I live in the US and purchased a micro usb connector from England. It was replaced, but the charging was still intermittent. So, my repair guy is ordering the entire flex cable and charging port from China. Hopefully, this will solve the intermittent charging anomoliy.

Too bad HP doesn't do a recall. Lenovo seems to have some good tablets....just sayin.

I have also had this problem with tablets not carging with bnoth my daughters slate 7's.

The first one happened during the 1 year warranty period but the other has happened after the one year period.

I have had the same poor response from HP.

I have never had this problem with any other device and can only conclude that the slate 7 is fitted with an inferior component.

Due to the inconvenience caused by having two faulty items and the poor customer care that I have had in dealing with my second product I will not be purchasing any other HP products.

I believe that a replacement part is available in the UK for around £23. I was informed by HP custyomer support that it would cost £132 to replace the part. So much for saving the planet and customer care,

if the miniUSB port is damaged, can that port be replaced using an after market  replacement part? I'm sure there should be some manufacturer in the world that makes them. 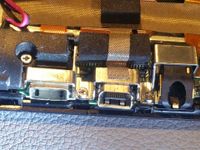 This is how my Slate7's miniUSB port looks like, only after 12 months of usage.  For the price I paid for this (AU$259), I should get a refund and a full replacement !

Just look at this quality ?!!  the port is too shallow that it plug wiggles as soon as ported.  The outline/borders are soft and after 250 charging, it is bent out of shape.  I never use the HDMI socket but look how how it is !

May I say though that the rest of the board is great, screen is magnificent, performance is up to specs !  It could have been better !

HP Recommended
I found a shop called 'UBREAKITUFIXIT' They want 79 Bux for this repair! You may want to Google the name to see if there is a shop in your area!
1 Kudo