Internal microphone not picking up anything. Tried all advice up until reinstalling driver, no chang

I have followed all steps to rectify the problem suggested on HP sight and used both Microsoft troubleshooter and hp AudioCHECK. All settings are correct and even tried reinstalling drivers but nothing works. Sound comes out fine but the recording is not working even when I try to use a headset. Note when setting up microphone there is no option for the internal mic 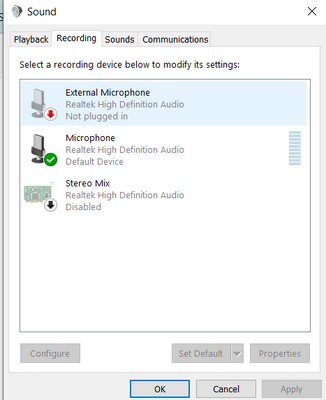 The sound control panel should show your internal mics as "Internal Microphone Array" (see attached screenshot). If not, I'm afraid you're using some generic Realtek drivers instead of the ones provided by HP. Regarding the "microphone setup wizard": it won't actually show "internal/integrated microphone" as an option even though your PC has them. That's normal, I just checked on mine. 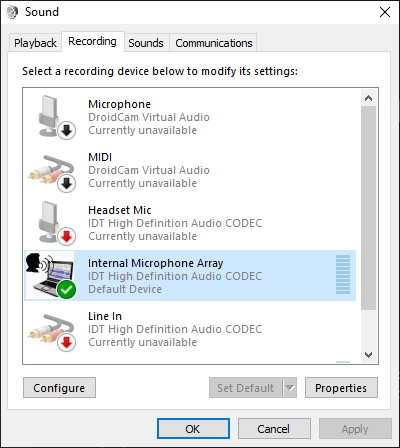 I know we're talking different laptop models and different audio codec manufacturers (yours is realtek, judging from screenshots), but rolling back to Win8 drivers might be worth a shot, right? For all I know, Realtek audio codecs have been a bug fest on all Win10 laptops I've come in contact with haha.

This is what's throwing me off. Bad drivers shouldn't break external mics. But it might be further evidence that your current drivers are doing a bad job and are treating your laptop as a desktop with a different set of ports. The absence of "Headset microphone" in your sound control panel further adds to this little theory.

PD: it doesn't help matters that Win10 likes to take the liberty of updating your current drivers without asking first. I've had this happen all the time with Dell Inspirons.