I have tried to find a list of what other CPU the motherboard supports but with no luck. If the BIOS is updated is it possible to use CPU from Intel Xenon 5400 series?

I hope that someone can guide me to a answer.

Welcome..... For your project a great source is the search box that targets this forum only, at the top left.  There was an earlier HP forum that I posted a bunch of info on the xw8400 that still can be found, however, via google searches for specific items.  Below are budget suggestions.

The source for the list of officially approved processors is best found in the latest version of the QuickSpecs for a HP workstation, and the latest one I have is Version 28 from 2/22/08.  These workstations still have the potential for excellent performance even now with processor upgrades and adding more memory.  You want two of the fastest quad cores.... they are E5345, X5355 or X5365 and those run at 2.33, 2.66 and 3.0 GHz respectively.  They draw max wattage of 80, 120, and 150 watts, respectively.  You want the latest version of those, each of which had 2 or 3 steppings, and you thus you want to search eBay for the sSpec code of SLAEJ, SLAEG, or SLAED respectively.

The heatsinks for the xw6400 or xw8400 were the same but the xw6600 or xw8600 will fit too.  You already have two heatsinks, and I hope they are the 3-heat tube versions, discussed below.  The xw8600 came out with a special "performance" double tall double fan heatsink for the hot processors, and one of my iterations of the xw8400 had one single tall and one double tall over the X5355 processors.... little difference in temperatures for how I use a workstation.

I ran my xw8400 with the E5345 SLAEJ and the X5355 SLAEG.   I posted previously on how to spoof the motherboard into thinking it had a "performance" fan and thus not boost up the fan rpms for the X5355 but my advice is to start with 2 E5345 SLAEJ processors for you.

Memory.... best to populate all memory slots with identical RAM sticks, HP holographic label ones, and ideally from the same vendor such as Elpida or Nanya (my favorites for that era, but Samsung is close behind as is Hynix.  Not Micron for the 4GB sticks.)  Look for HP part number 398708-061 for 4GB sticks.  For 2GB HP sticks look for the same brands but Micron 2GB are OK.  Look under 398707-051 (or -551).  Careful shopping for used HP sticker RAM on eBay is worth doing.

OS and drivers:  I use the MS "system builder" W7Pro64-bit install.  I always load the latest BIOS first.  I only build now with non-RAID single 300GB SSD (I only use Intel 320 series 300GB now, with 2TB or less documents drive also in place.  Make sure to set BIOS SATA Emulation to RAID + AHCI before install, even if you'll never use RAID.  Any of my posts on xw6400 BIOS optimization will generally be good for the xw8400.

Finally, rarely the optical drive in place is too old to run the installer DVD so you might want to buy a newer HP one and swap it in.  Newer HP universal installers from the Z600 or even the Z620 era will work fine on the chipsets on the motherboard (for Broadcom, Realtek, etc.).  There is a "best" ESB2 driver I have posted on also.

From the W7 Windows Experience Index scoring system you can expect:

Video cards.... for budget card I like the used eBay FX3700 a lot, which will get you 6.8 for 2D and 3D video scores.  There is a HP firmware updater you can download, and it will update non-HP FX3700 cards too.  You can buy up from there if you don't want Quadro hardware.  For example, a nVidia GTX 650 Ti Boost on my xw8400 registered 7.9.  The pic below shows that.... this build got one of those Intel SSDs next: 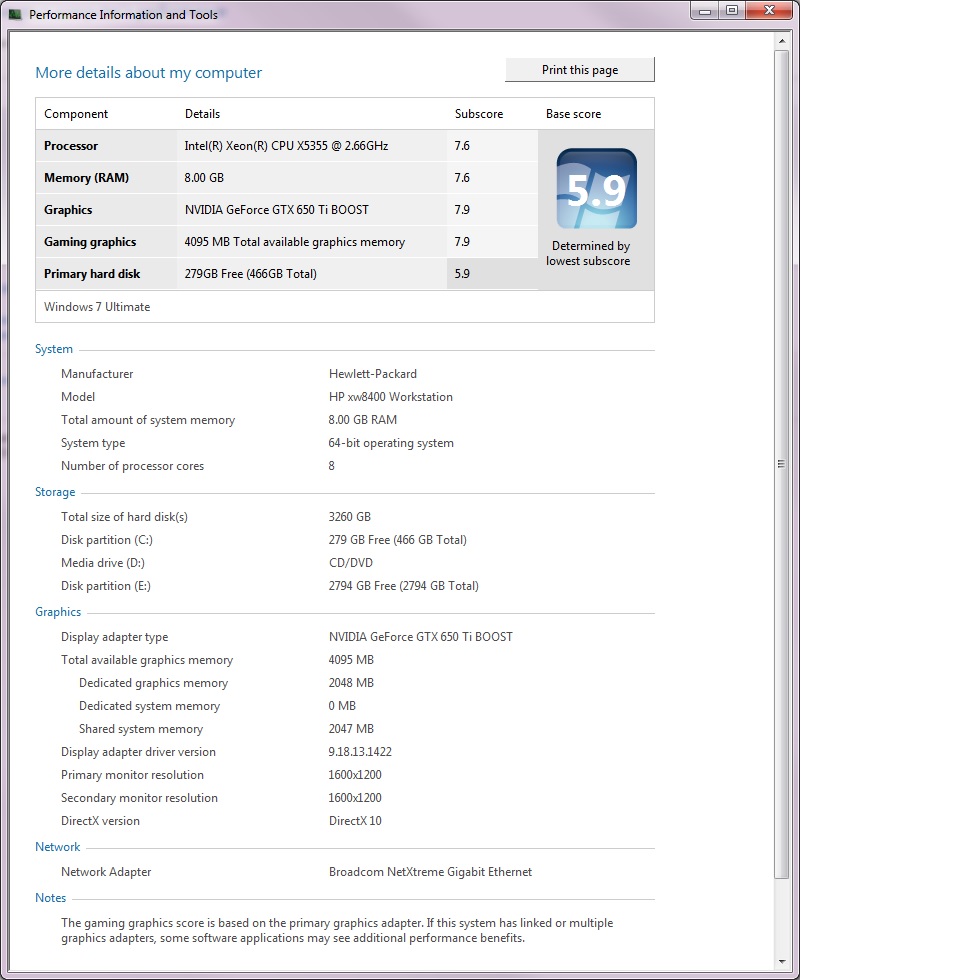 Tnx for a long and detailed reply but it dones not awnser my question.

As I said I had tried to find a list with what CPU the motherbord supports and I have used both this forum and google.

My question is not about watt, heatsinks and Xenon 5300 series.  It is simply if Xenon from the 5400 series can work with the motherboard.

I am not about to upgrade it for my self and I will not buy a new CPU for it. I am not using my xw8400 at the moment and a friend that have a CPU from the Xenon 5400 series have given me an offer for the worksation but he wants to know if he can use his CPU on the motherboard.

So sorry... did not realize your limited needs, but my post was actually also for future forum members wanting the latest on how to upgrade the xw8400.

The answer to your specific question is no.  To use the 5400 series you need to move up to the xw6600 or xw8600 generation of workstations, and the latest Quickspecs for those will tell you the 5400 series processors you can use.

Google "xw8400 Quickspecs" and the xw8400-approved processors are listed on page 3:

I have of course read the xw8400 Quickspecs but that is specifications of what you could buy a xw8400 preinstalled with, not a list of supported CPU. And the Quickspec was released in feb 2008 and the first Xenon 8400 was  released after that it could not be in the list of CPU you could order at that time from HP.

And since the Intel® 5000X can be used with the  Xenon 5400 series I thought it could be possible with a BIOS update to run that on the xw8400 motherboard. But a updated list of supported CPU is nowhere to be found.

You are correct in your reasoning, and I am with you in wishing that we could drop in any processor that "should" work.  However, the HP workstation's BIOS includes a "microcode" listing of what processors have been certified for that box, and it is a general rule that if a processor is not in the microcode listing then it will not fire up.

There are some rare exceptions, but back when I was working a lot with the xw6400/xw6600/xw8400/xw8600 workstations I tried some of the xw6600's HP-listed 5400 series processors in the xw6400.  No go.... not even a squeak from the boot process.  They use the same sockets so I figured I'd try, and I did not damage the processors or the motherboards.

I did not try all the 5400 series processors, but I've never heard of an unlisted processor working in one of these two generations of workstations.  Forum posters have found a very few exceptions to this general rule, with the Z400/Z600/Z800 series.  For example, I'm running a X5690 in a Z400, and that was never listed in any of the QuickSpec documents.

This is all related to the fact that these workstations need to run very reliably for enterprises, and thus HP needs to limit the processors to ones that they have tested extensively for compatibility.  They can't have some IT guy throwing in faster processors that "should" work and have the enterprise blaming HP down the road for unexpected glitches that might show up.

Apologies for arriving late at the party.  If you're sufficiently brave or foolhardy, isn't it possible to flash a custom BIOS with the microcode needed to upgrade the CPUs?

One compelling reason is to add SSE4.1 extensions.  For example the latest release of AutoDesk 3DS Max requires them, and other workstation applications are likely to follow.  It would be unfortunate to relegate these brutish but still powerful models to the dustbin, for lack of some microcode.

Check out this video: 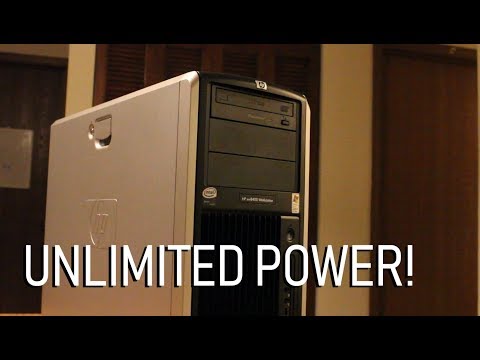