I have an HP z240 workstation with an i7-6700 that runs all 3 fans (case, psu and cpu) at max rpm as soon as the computer is turned on and stays that way until it is shut down. I have ran multiple 3rd party monitoring programs (hwinfo, aida64, fanspeed, coreTemp) and all show a cpu temperature of around 20*C at idle. That seems a little low but I figure reasonable if the pc has just been started, not really been put under load yet and the fans have been running at max the whole time. However, I installed HP Performance Advisor and it shows an Ambient/Case temp of 16*C but a CPU of 128*C no matter how soon you check it after start up or what you do it stays at 128*. Obviously that is not correct, but why is Performance Advisor seeing that temp but the other monitoring programs aren't? Also if that is what the system actually thinks the cpu temp is and that is causing the fans ramp up why is there no thermal throttling engaging or why is Windows even booting? I have a second identical model on hand so I was able to do a lot of testing before getting to this point but I have tried swapping out every component with known working ones other then the motherboard (including cpu itself). I'm assuming the faulty sensor is on the motherboard at this point, I thought from reading online it may be in the cpu itself but I swapped it out with another identical i7-6700 and had the same issue on this motherboard, so my questions are, where exactly is the cpu thermal sensor located? Is it possible to replace it with a new one or would I just have to install a new motherboard? If everything still functions perfectly other than the fans running at max speed all the time and being annoyingly loud  is there a reason to worry about replacing the motherboard or just use it the way that it is?

If you had used this sites "search" feature you would already have found the cause/solution as this is a common post that has been asked/replied to many, many times in this forum

short answer: modern pc's including the HP workstations have more than one temp sensor, for the zx20/zx40 lines there is a ambient Temperature sensor that is embedded in the power cable when this sensor (or the mb circuit) fails the sensor will read 0c or 256c this sensor can be monitored by the  HP Performance Advisor (for workstations)

you can either replace the power cable or just the sensor in the cable. read previous posts for details

I read those posts. My understanding from reading those is an issue arising when the ambient sensor fails and shows high. My ambient temp sensor shows what I am assuming is a correct 16* C. My cpu temp sensor is what is showing high and it's not reading 0* or 256*, its showing 128*. Are you saying replacing that sensor would in the power cable would also affect the cpu temp sensor?

please run the performance advisor software and note the results

while it is possible to have a bad MB cpu board sensor circuit,... it's not a common point of failure the power sensor is the most common cause and since i don't own any low end workstations i don't know if your model only uses one sensor circuit

Thanks for the quick responses, I appreciate the help. I booted the machine and grabbed a screen shot from performance advisor as well as Core Temp just in case you see something that will help out. As far as the ambient temp is concerned, I'm not in a server room but it is a fairly cool temperature room. At the time I took the screen shots actual temp in the room is 65F and the computer has the side panel open as well so that might be why it seems unusually cool. 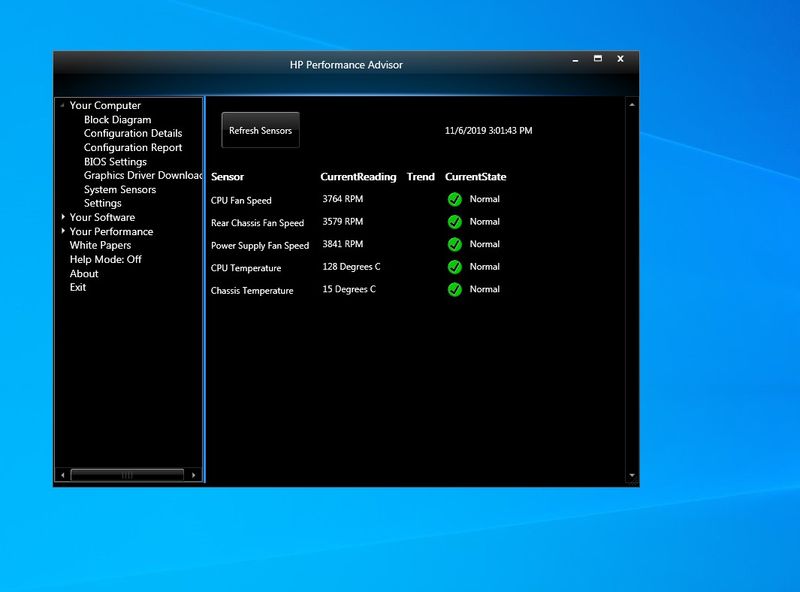 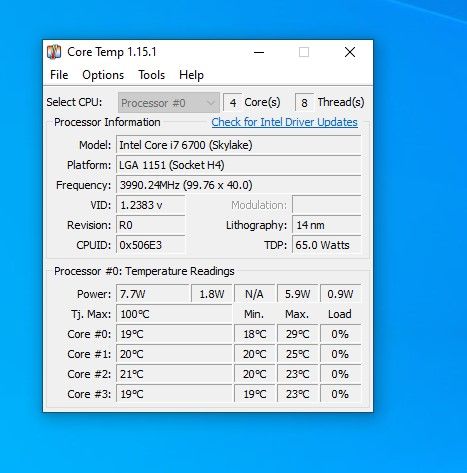 you might want to try a different cpu,.... ebay has some that are quite cheap just to remove that as a possible source of your problem

I already did that. I have an identical z240 also with a i7-6700 so I swapped them. The one originally from the problem machine works perfect in the non-problem machine.