Upgrade amount of SATA in Z420

Hi, my question is about an upgrade in the SATA ports of my Z420. It has only 4 (the others are only RAID). Can I put a PCI -e card to expanse in 2 or 4 the quantity of SATA ports?

if not, perhaps i can deactivate the RAID mode in the 4 ports of the motherboard.

Thanks in advance for the answer.

A "degraded" RAID-1 ("mirrored") set has one working disk-drive, and one "dead" disk-drive.

The intent of "mirroring" is to provide redundancy -- when one disk in the "mirror" fails, you replace it, and "rebuild" the mirroring, and continue.

Just attach one disk-drive.  RAID will treat it as a "degraded" RAID-set.

HI, thanks a lot for your response. I'm from Chile, sorry for my english.

Do you mean that i can put a disk in the RAID sata slots and it work as another disk?... 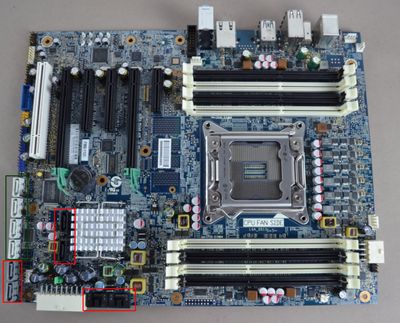 Thanks in advance for your answer.

>  Do you mean that i can put a disk in the RAID sata slots and it work as another disk?

True: some SATA ports can be used for RAID.

False: all SATA ports can be used for RAID.

RAID is a configuration "on top of" the basic connection of disk-drives.

You must use "RAID SETUP" to select the individual disk-drives that are to be grouped together, to become a "RAID set".

If you don't group them, they will function as independent disk-drives.

The manager of a football club signs individual players, and then must make them work together, as one team.

When one player is injured, or sold to another club, the team is "degraded", until a replacement player can be added, to bring the team back to "full-strength".

If you have created a "RAID set", and later one disk-drive fails, then the set is "degraded", until you remedy the problem.

Thanks, yout explanation is very helpful.

I'll try to put a disk in one of the Sata ports that are RAID, my target is NOT to use the RAID functionality, just increase mi pool in FreeNAS. so I'll try and i'll comment to you.

Welcome to this forum.

Please click the purple/white "Thumbs Up" icon for every response that is helpful.

Also, please click "Accept As Solution" for the best response.

Hi, I'm a bit of a novice here with regards to my HP z420, however, om my Z420, I was having a similar problem, I wanted an SSD and 4 other HDD's as JBOD (just a bunch of old drives), I think this is what you want (though not necessarily with an SSD?). The BIOS would see my SSD (Boot Drive) but not any of the other 4 HDD's.

It worked like a charm, all my drives were seen and WIndows 10 booted up without any problems. MY Z420 is now running great ands I have loads of HDD space.

for anyone who does not know how to change the BIOS mode to AHCI mode after Win 7, 8, or 10 install, this is it (you can do this as many times as you wish, backwards and forwards)


1. Type MSCONFIG in the Windows search bar finds the System Configuration app (MSCONFIG to its old pals). Open it.
Choosing the "Boot" tab at the top shows a section called "Boot options", including a check-box for "Safe boot". Check it. ("Minimal" seems to work fine. Probably several others are also fine.)
2. Restart, which should go straight to Safe mode.

3. Restart the PC and enter your BIOS during bootup (F10 or ESC).
4. Change from AHCI+RAID to AHCI mode then Save & Exit.
5. Windows 10 will launch in Safe Mode.
6. Type MSCONFIG again in the Windows search bar finds the System Configuration app (MSCONFIG to its old pals). Open it.
Choosing the "Boot" tab at the top shows a section called "Boot options", remove the check-box for "Safe boot". Uncheck it.

Alternately, right click the Window icon and select to run the Command Prompt in Admin mode from among the various options. Cancel Safe Mode booting with the command: bcdedit /deletevalue {current} safeboot
7. Restart your PC once more and this time it will boot up normally but with AHCI mode activated.