I've recently come across a Z420 workstation that i'm looking to upgrade a bit. I know it's "old" but for some reason i really like the thing. I found a lot of helpful talk in these forums, which was encouraging enough to get me to sign up and inquire here 🙂

I've seen some discussion about v1 vs v2 Z420 models.. how can i determine which one i have? I've already managed to upgrade my BIOS to "J61 v03.96" (2019-10-29) and i do know that it has the 600w PSU. The reason i'm asking- and this is another question in itself- is I'm wondering what my options are as far as upgrading the CPU. It currently has an E5-2637 but i'd like to put in something with more cores. The manual states "E-2600 series up to 150watts", but that doesn't seem to tell me everything i need to know. Just looking around  there seems to be v2, v3, even v4 2600 Xeons out there... If i find something on eBay, how could i determine whether it will work on my mainboard? 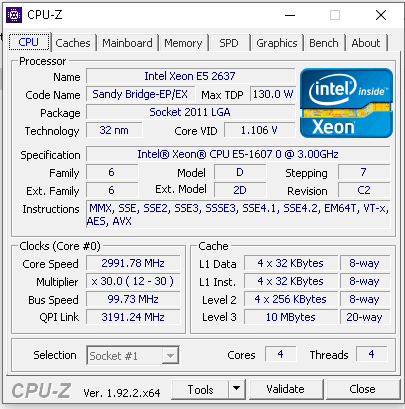 Hi and welcome to the forum,

Please also be aware that only specific V1 (or V2) CPU's will work in the Zx20 series workstations. You can find a list of compatible CPU's in the HP Z420 quickspecs.

With regards to upgrading - this is dependant on what you want to use your Z420 for, e.g. gaming, CAD, video rendering, running VM's, etc. Please clarify your intended primary use and what other hardware is currently in your machine, e.g. RAM type and amount, GPU, HDD/SSD's, etc?

Thanks! I found that info in the BIOS... looks like i have the earlier boot block. But what really bothers me is that it seems CPU-Z may have misidentified the processor.. what's shown here matches the specs for this SKU: a Xeon E5-1607 as opposed to E5-2637. Strange.. this is a tool i've always loved and trusted.

As far as the other specs, when i acquired it it had 4x 2gb ECC unbuffered DIMMS, a single spinner, and an older Quadro card which i swapped out for a P400 that i had laying around. It also had a "WinTV Pro" tuner card!! HA! Anyway, I replaced the spinner with a couple SATA3 SSDs and I intend to add 16gb addt'l RAM to start with. I've never come across a board so picky with the type of RAM it supports, but unbuffered ECC wasnt that expensive once i finally determined that's what it needs. Here's hoping it actually works when my order gets in 🙂

I'm setting this machine up to run Blue Iris with 6 to 8 IP camera streams, so it must be able to handle some video transcoding, nothing too heavy as most of the camera streams can be stored as-is. I may also run a HassOS Linux VM on it, if i dont give up first. I had some network problems with the VM when i tried this the other day...

I never could find any documentation with a list of compatible CPUs... just the statement "Support for E5-1600 and E5-2600 Series... up to 150W" in this document but thanks to this forum, i believe i now have enough info.

I REALLY like this z420 and it was free so I dont mind spending $100 and countless hours on it.

It seems like with these upgrades it would do just fine in this role. 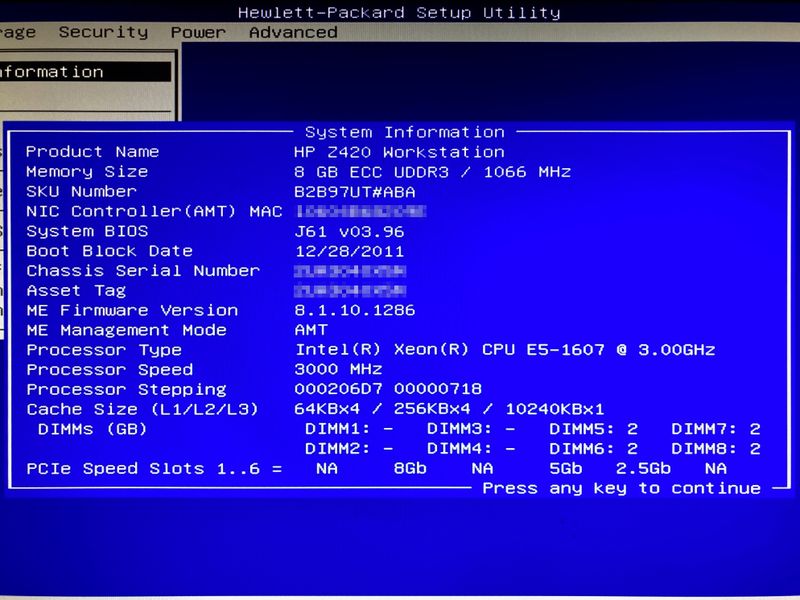 Here is a link to the HP Z420 Quickspecs (ver.1). You might also want to bookmark the HP Z420 Support page.

i would also visit greenpcgamers

A bit more.... the 150W max TDP E5-2687W has two versions... a C1 and a later C2 stepping.  Whenever possible it is advised to get the later stepping because it has improvements built in that Intel felt necessary.  These types of processors are often listed on eBay including their sSpec code, also laser etched on the stainless heat spreader atop the processors.  The one you want has sSpec code SR0KG and the earlier one has SR0GX.  Just search eBay for SR0KG... a majority of the HP-certified processors for these ZX20 workstations only have one stepping.  That info is easy to find via the Intel "Ark" site.

Of interest..... I have never seen a HP workstation with one of the earlier steppings.  They always seem to be the latest.  Maybe that is because they have the inside info on when the improved version is coming out and wait for that.

Z420's are one of the best cost/performance workstations these days- ultra-reliable, quiet, and capable of high proportional upgrades.

z420_3, the second tier system in the office, when purchased:

Note that this has a version 2 motherboard system but arrived with a version 1 CPU, the E5-1607.

This system now has 64GB of RAM.

For the Fist_Rockbone z420, in my view a $100 upgrade budget is inadequate for a video editing / VM system, but it's a start and as can be seen from the z420_3 example, the limits are surprisingly high.

RAM: Video and the need to assign a portion of the RAM to VM access suggest that the bare minimum is 16GB.  In my view, plan for an eventual 64GB of DDR3-1600 ECC Registered by buying either two or four 8GB modules, placed in the proper RAM slot configuration- see the manual.  Buy only RAM that has the HP part number sticker on it.  This is likely to be ex-server RAM.  Server RAM is changed by hours very conservatively and it's very rugged. I've used this in several systems and only had one module failure.  It's not expensive, and plan ahead to eventually fill all the slots.

GPU:  With video editing /processing, the GPU has a variable role in the computations, some editors support CUDA acceleration and this is true of the variability in CPU role. In this view, consider working towards a fast, high bandwidth, high CUDA-count /8GB VRAM: GTX, RTX, and if possible a Quadro, for OpenGL, viewport, and 10-bit color support.  with a workstation, which is designed to be quiet and in comparison to gaming systems has a lower case air flow,  buy only single fan, blower-style GPU's. If the initial budget is restricted, consider a GTX 770  which is a 4GB /256-bit.  These days, about $80-90. Passmark average 3D score = 5907, but there is a z420 with an E5-1650 and GTX 770 with a 3D score of 6524.  For comparison, z420_3  uses a GTX 1060 6GB with a 3D  of 10953 and that still has problems running a 40" 4K monitor without screen tearing on video playback.

Drives:  The drives are of considerable importance and if possible, have a fast OS/Programs SSD,  active files/ projects SSD, and an archive drive, a large capacity mech'l drive.  If there are going to be video files- among the biggest possible, buy at least 4TB or start with a 2TB.

Let us know how you progress.

Appreciate the info! I think we’re on the same page. I feel good about spending more on this machine since it will go such long way.

One question about the RAM: will it support either unbuffered or registered ECC?

Pretty sure I read in one of the manuals somewhere that it must be unbuffered- which is what is currently installed: 4x 2gb 1600Mhz. Contrary to the manuals, all 4 sticks came installed in the rear slots- I assume since it lacks that front slot cover I've heard about. Do I need one of those?

I’ve also read that unbuffered is faster, but I wonder if that will really matter since I won’t be actively using this machine once it’s completely set up. This z420 will just be an NVR, more or less.

As for as the GPU, the Quadro P400 I installed is nothing stellar, but I'll stick with it for now. I do not yet know if the software (Blue Iris) will even utilize the few CUDA cores that it has. This probably wont be a major factor since it will only be transcoding SD video until I upgrade the rest of my cameras. Eventually it should not need to handle any transcoding/editing unless/maybe I needed to clip and export footage for some dreadful reason.

For storage, there are two SSDs installed. There’s only two 6gb ports unless I missed something. If/when I need more storage for archival, I will put in a large spinner or just use my network storage.

I still have a ton of work to do with the software before I can determine how much upgrading I actually need, but I will start with more RAM and a better CPU.

Thanks again everyone and I'll keep you posted!

I've only worked with the version 2 Z420s so I can't answer your question on memory from personal experience.  All of the HP literature on the Z420 memory has stated the need for ECC unbuffered.  All of the memory we recently loaded into a group of 20 Z420 version 2 workstations was the exact same server memory we use in the Z620 version 2 builds... ECC buffered 1866MHz.

When HP certifies a component for use in a particular workstation they do quite a large amount of conformance testing.  If they don't test it they won't certify it.  Back when they were working on the ZX20 workstations use of that type of memory on the Z420 might have been considered impractical or too expensive, with testing of it reserved for the Z620/Z820 flagships.  You'll just have to experiment and let us know.  We in the past have done that for others....

I agree with Bambi that the HP stickers on the RAM sticks are a badge of excellence.  Having said that I've not been able to find enough for some projects and in those cases matched exactly what HP used from Dell/Lenovo-IBM servers and have not had issues.  I still prefer the HP recycled server RAM if available.

The Z420's passive front memory air flow baffle is worth getting if you're loading up on RAM... it was designed by HP engineers exactly for that situation.  It shunts some cool ambiant airflow up over the front memory bank and out through the power supply.  I've posted the part numbers here in the past, and they can still be found.  The same item for the Z400 will not fit in a Z420.

With regards to compatible memory, I found this document. HP Z420 memory configurations and optimization