I am wondering if my Z620 is not the problem in this following situation:

in June 2017 I loaded and used Redshift (a fast renderer) with Softimage.

I try to load the latest driver for the Quadro, when Redshift seems not to recognize the Cuda cores either.

I contact Nvidia support and they are clueless, send me an older driver, to no avail.

Zephyr support tells me the Quadro (though good in their time with Z620) are now too old for photogrammetry.

They advise me to replace it with a (cheap) 1050 THX ti, in order to not "bottleneck" the CPU with a more

But since Redshift used to recognize my system of Cuda, it might as well be a question

of something suddenly ill functionning on the Z620. What does HP support think of

(if possible) the whole issue??

Thank You in advance,

Just to eliminate the simple fixes first, can you confirm your GPU is set as indicated below in the NVidia Control Panel; 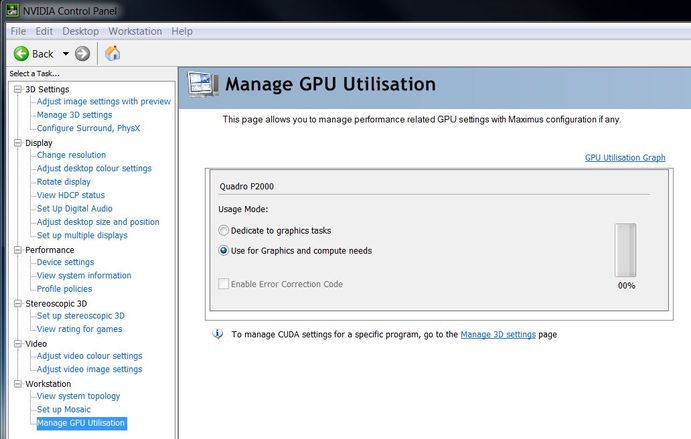 Also, just to eliminate corrupt graphics drivers as an issue, I would suggest you completely uninstall all NVidia software on your computer via the Control Panel then use the free version of CCleaner to scan and clean the hardisk and registry. Simply uninstalling the software will NOT remove all the NVidia files. IMPORTANT: You need to run CCleaner several times to detect and remove all traces of the NVidia software from the registry. Keep scanning and cleaning untill CCleaner stops detecting registry errors. Reboot the computer and install the most recent NVidia drivers for your system OS. You could also try installing and running the free Octanebench GPU render benchmark.

thank you for your answer.

i did full remove every nvidia file using DDU from guru3d,

(it removes the registry aswell etc everything)

then re - loaded the latest nvidia drivers

I did the benchmark octane, and the run bat does not find "supported GPU"

is that a sign that something is still wrong? or just that the Quadro K4000 is totally old?

(also did CCleaner registry fixes to make sure)

(i don't think it's a issue with the card, based on your description but most likely a OS/software related issue)

if the new card has the same problem, then you have a OS/Software issue and a reinstall of both should resolve your problem

your time is worth something, which is why i don't recomend spending excessive amounts of it on resolving a software problem when a reinstall will fix the problem most likely, and takes a know amount of time to do so