I have a z420 with Windows 10, I put in PCi expres slot an NVME 960 evo with adapter. This is a non bootable disk, all god but not happy with the speed wich are actualy lower than 950 evo SATA.

My question is this actualy the desing limit, I've seen other talking about 1-2 GB data transfer, I have in this configuration 400 MB (read). I use this one to store VM's 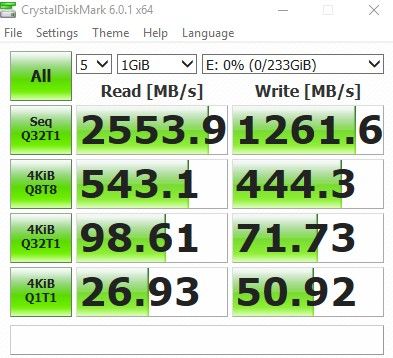 this has been covered numerous time here in this forum, if you had used the search feature you would have been able to read som of the previous posts/re[lies

the HP zx20 series workstations do not support booting from a nvme based SSD, support for this was not added untill the zx40 series. You can only use a SATA/AHCI based SSD that connects to a onboard SATA port such as a EVO 850

while you can not boot from a nvme, you can still use it as a DATA (non booting drive)

I’m not looking to make this disk bootable, just for data.

My question is what is the speed limit for pci express for this system, in the current configuration 860 evo nvme  has lower performance than 850 evo sata.

so, did you partition it as NTFS using disk manager?

Yes I have created a GPT volume formated NTFS.