Yes I know about the 5 pin / 4 pin issue with coolers. I intend to use the 5 pin connector from the original cooler , cut out wires and solder wires to the new cooler.

And I've just paid for an e5-1680v2 in the end today... especially for the higher overclocking speed,  85 deg CPU temperature instead of 70 and bigger cash memory.

Another issue with Z420 I've experienced , and I saw a few forum topics about it : the cooling HP management. In short , if CPU temperature is going up to , say 85 deg , fans are still almoast idle . So , the temperature/speed curve for the fans is way too flat in order to protect CPU.  I was even researching how to put an external fan controller.... What do you know about this ?

Since I'm using a water-block on the CPU and a remote radiator/fan/pump set-up, I opted to add a seperate temperature controller board,[edit] This is visible on some of the images I've prevously posted on the forum. I have also retained the fan from my original HP stock air cooler and remounted the fan to cool the voltage regulators that surround the CPU socket. I have a temperature sensor mounted on the back of the CPU water-block which reads the temperature and adjusts the fan speeds accordingly. I also decided to add some self-closing, quick release connectors so that I can disconnect the cooler for any maintenance or moving the Z620. 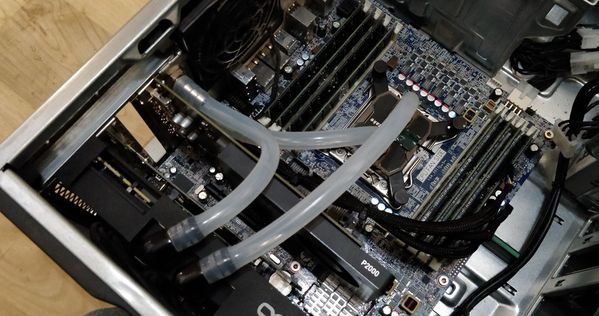 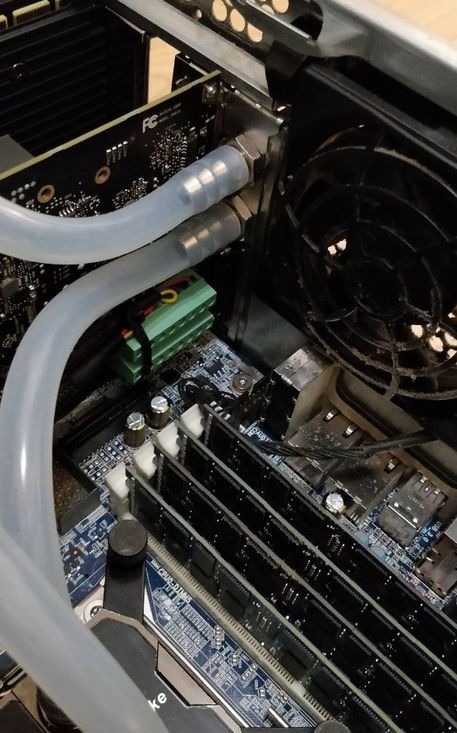 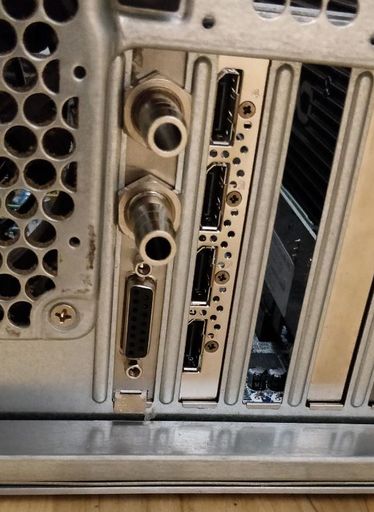 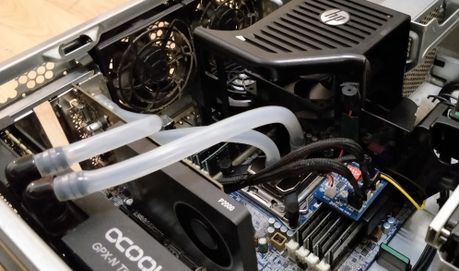 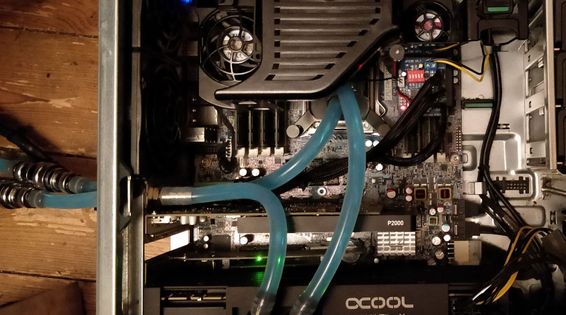 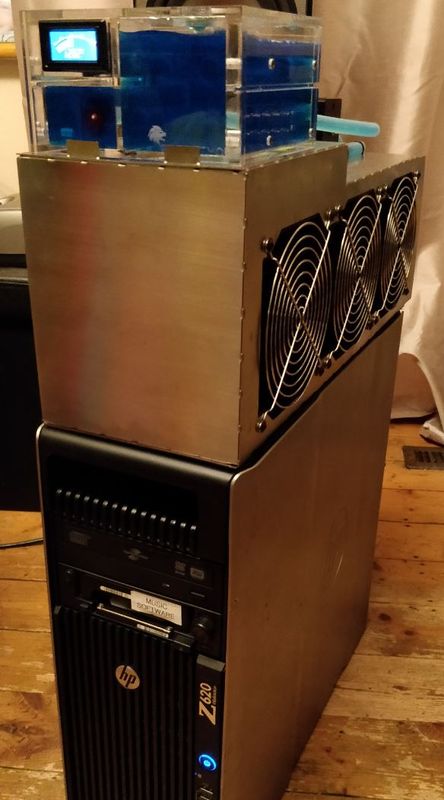 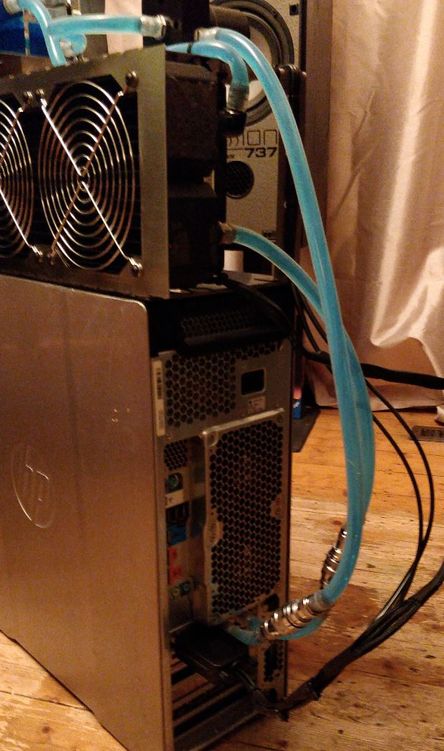 You can buy these temperature controller boards on ebay for less than £2 !! 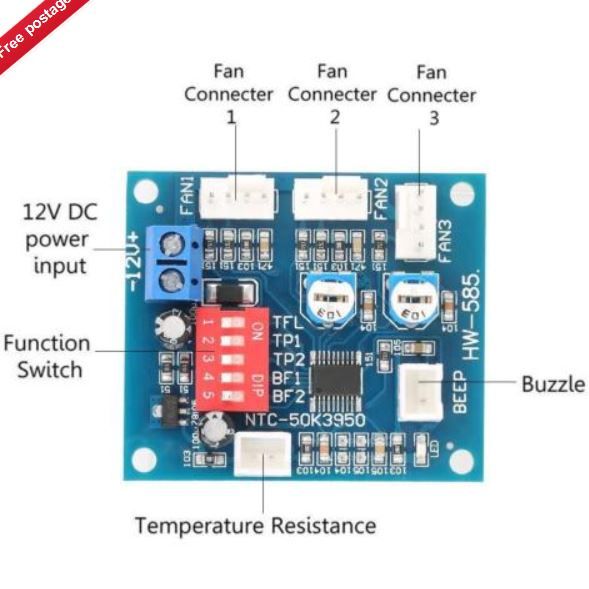 Pretty cool what you have done there.

Now I can see you do have 3 fans connected to that fan controller. I do assume all 3 are the fans for your liquid cooling system.

I also assume you did leave all original fans of Z420 connected to the board... I mean front/back/CPU (which you say you changed position).

I am wondering if I can controle the Z420 front/back fans and CPU fan (the Noctua one I want to install) with that controller .......

I am thinking that disconnecting from motherboard the HP fans will give me the error on boot (can be bypassed pressing F1 as far as I know / or you can fool BIOS by connecting to earth some of the pins?) . Do you think fan management will work like this ?

And about that controller, I found it on ebay . https://www.ebay.co.uk/itm/12V-DC-Fan-Temperature-Control-Speed-Controller-CPU-High-Temp-Alarm-PWM-P...

Reading description and settings of it , I see you can set switches TP1 and TP2 ON/ON and fans will start to accelerate from minimum speed at 60 deg to maximum speed at 90 deg. Can you confirm it will be a linear curve between these two temperatures ? (60 / 90 deg would be  in my opinion the best choice in case of a air cooler on e5-1680v2 CPU)

By the way using this nice controller I would sort out the 5 pin/4pin issue connecting a non HP cpu cooler.

On the other hand, using this controller for all fans in Z420 you rely only on the readings of that temperature sensor. Is it advisable/reliable? Readings are accurate enough and not lagging?

The 3x 140mm fans are all connected to the FAN1 socket on the temperature controller board using a 3-way fan cable; 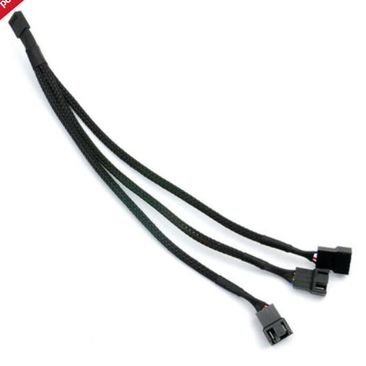 The pump is connected to the FAN2 socket. The potentiometer adjacent to the FAN2 socket allows manual speed control of this output. This is set at 100% for the pump to ensure constant maximum coolant flow in the loop.

The thermostat display on the water reservoir is powered from the FAN3 socket as this also has a potentiometer for manual speed control. Again, this is set at 100% = constant 12v DC output, NOT pulsed.

Yes, all the original fans in my Z620 are still present. I removed the fan from the stock HP cooler and re-fitted the fan directly to the memory shroud using a small nut and bolt; 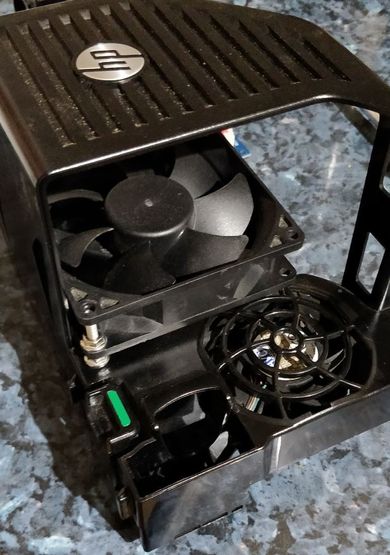 With regards to the temperature controller board, here are the settings I'm using;

The reason TP1&2 are set so low is because the temperature probe is mounted on the back of the water block, i.e. not in direct contact with the CPU, and there is a thermal lag when the CPU starts to heat up.

To be honest, the water temperature usually hovers around the 23.6°C mark when under normal use and maxes around 28°C under continuous heavy load, e.g. rendering for 8-12 hours. Maximum CPU temperature recorded is around 58°C even under extreme heavy load and below 30°C at idle.

Brian you were right ... about the all core speed of overclocked Xeon in Z420.

I did some tests , and the outcome about CPU speed is the following:  it does stay on 4.5 Ghz on all cores when active cores is less than 6 and usage is less than 100%. Than I tested on CPU stress Prime95 . Setting on task manager the affinity you can set 1 core, than 2 ... and so on all over to 6 .

TDP is the limiting factor I think , not the cooling solution ... Because even though the CPu temperature was low due to a good cooling (below 60deg) still Bios is setting lower speed for CPU taking into account the load, the external temperature , CPU temperature and especially keeping the CPU under the 130w TDP limit...

Anyway , I was enjoying games on speed of 4.5Ghz on all cores for example because CPU load was only 35% maximum ...

And as I said before I was happy to see I can push  the e5-1650v2 on air cooliing to the range achieved by other users with HP liquid coolers.

Now next step will be to see how much my soon coming e5-1680v2 will overclock... with my present air cooling solution.

I even have some tiny hope I can go near to your custom liquid cooling speeds (lol).

With regards to the all-core clock speeds for the Xeon CPU's, I found this table in the HP Z420 quickspecs; 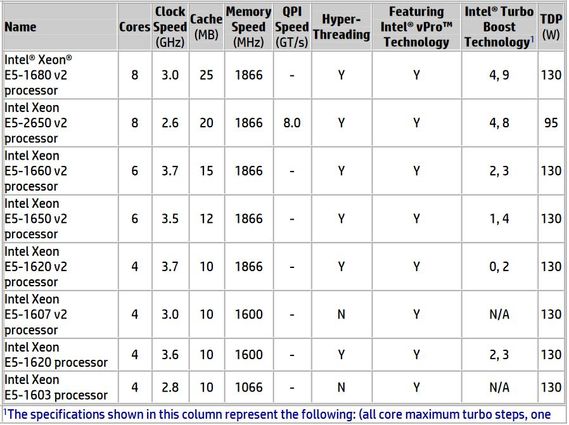 Nice informative table that one...

Now I still have a question for you Brian : do you know what is in fact the limiting factor set by BIOS?/Motherboard? when you set the all core speed in XTU?

Are you applying some additional Turbo Voltage in XTU?

Please re-check my XTU guide on page 1 of this thread. My post prior to the XTU guide shows you the additional Turbo Voltage settings I am applying in XTU.

"Now I still have a question for you Brian : do you know what is in fact the limiting factor set by BIOS?/Motherboard? when you set the all core speed in XTU?

Okay, a quick crash course in semiconductors. When you switch on a circuit, the voltage appears to switch on instantaneously. However, in reality the voltage ramps up from 0V to 1.3V in a very short space of time. (Remember we are talking about GHz frequencies = less than 0.000000001seconds between pulses). As you start to increase the clock speeds, (i.e. increasing the CPU frequency and shortening the length of each pulse), above the standard CPU stock speeds, there is a risk that the signal will not reach 1.3V before the signal is turned off. In real life, logic and memory circuits read 0 and 1 signals as a voltage range, e.g. any signal between 0 and 0.3V = 0 and any signal above 0.6V =1 - these are not the exact voltage ranges but listed as a guide). Increasing the Turbo Voltage helps to overcome this problem.

Yes I did use your table as a reference for voltage.

I am afraid more than 242 mV is not advisable.

I might give it a try , just fir the sake of experimenting

I am experiencing some issues with XTU , tried several releases , same..

1. XTU does recognise all 8 cores in "System Information" tab , but does allow me to overclock only on 6 cores...

2. After installing , both Basic and Advanced overclocking Tabs are working. After a while , both dissapear , I mean not there any more (see photos) . Reinstalling is fixing the issue.

Did you experienced same? Or have some ideas how to fix...

NOt able to access overclocking after a while . And showing only 6 cores OC