When I attempt to solve or graph the function of an odd root of a negative number I get an error and it only graphs for x>0.  For example:  f(x) = x^(1/3) you only get the positive values of x.  However, when written in radical form you get the correct answer and graph.   I'm not sure how to enter a radical sign here, but if you solve for the cube root of (-8) you get -2, which is correct.  But if you write it in exponential form, (-8)^(1/3), you get an error.

Anyone else have this problem and how to correct this?  Thanks!

You can see, the imagen from HP PRIME and Wolfram Alpha, as ... 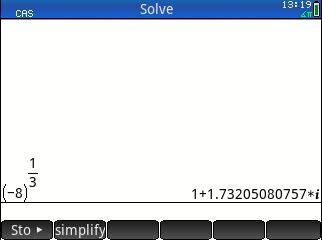 Thanks for your response, @Make.  But why is the answer not -2 for both in my example below? 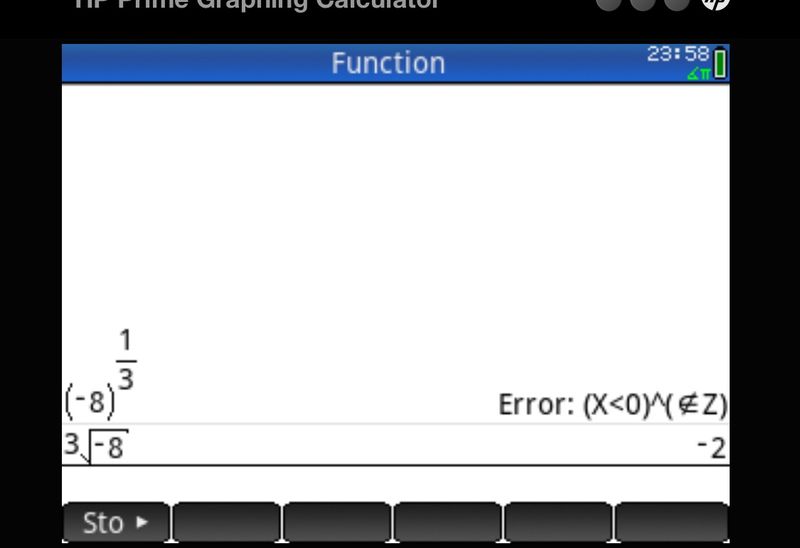 You can see, the imagen of how obtein your result (-2). 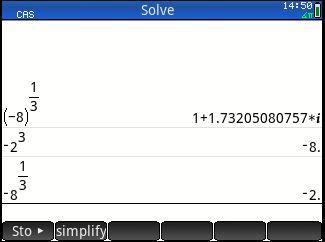 But my original question remains:  Why does (-8)^(1/3) not equal -2, but instead gives you an imaginary number?

But my original question remains:  Why does (-8)^(1/3) not equal -2, but instead gives you an imaginary number?

There is a reason, but it's not a mathematical reason, but rather a tool useability reason.  Sometimes users need to know the principal root (that is, the root with the smallest angle above the real axis), and sometimes users need to know the real root.  As you noticed, when the root is an odd integer, and the argument is negative, these results are different.  So HP long ago decided to give us two different tools to get whichever one we needed.  If you need the principal root, use fractional powers.  If you need the real root, use the root function.  This dichotomy applies to keyboard calculations, programs, and graphing.

In other words, it's not a bug, it's a feature... but unfortunately it's a feature that has been around so long that HP has forgotten to mention it in some of their calculator manuals.

Disclaimer: I don't work for HP. I'm just another fan of HP calculators.

See, the result's from Wolfram Alpha, from ... 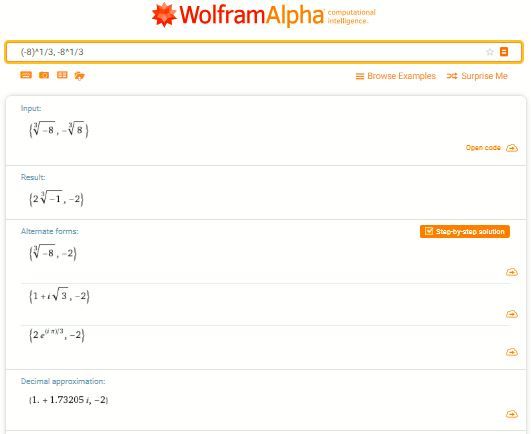 This pauses a problem as "power" is a FUNCTION. ie: a mathematical construct that associate one SINGLE value to a set of inputs.

So, mathematician, when they defined what the power function is, had to choose one of the N answers as the univessaly agreed upon one. They have choosen/decided that the 'proper' answer to power(a, b) in cases such as a=-8 and b=1/3 would be the "first root" (1+sqrt(3)*i) of the sollution set to the reverse problem.

It can look strange when you come from the "non complex number" world as -2 seems to be a simpler/easier sollution. One also gets his mind "oriented" by the fact that teachers (semi-eroneously) intruduce fractional power as an "explanation" of rational nth roots...

However, mathematician have very good reasons for their decision. Among other things continuity. power(a,b) when b varies, will be continuous if you take the mathematician's definition, not if you use the nth rooth...

(To ilustrate this in an other domain, here is a discussion I had with my kid's teacher who taught himthat plannet's orbits are circles (especially as my kid is, like me an amateur astronomer and knows better):

- Me: Please do Don't teach my kid false "facts"

- Him: The reality (it's an elipse) is to complicated as they do not know what an elipse is:

- Me: Plannets do NOT orbit in elipses, but in elipse like tragectories. Why don't you just say: "they orbit in "deformed" circles, or they orbit on tragectories that are close to circles, or anything along these lines. At least it would not be incorrect, while still beeing at their level"

- Him: What do you mean orbits are not elipses!

So, here you go, to go back to the original topic, Prime gives the "official" mathematician answer, and for good reasons.

If you want to perform a nth root calculation, then you can use the nth root function which is there exactly for that case.

I am an HP Employee
0 Kudos