Has the HP Prime been abandoned for iOS? * SOLVED *

Appears Tim has updated the iOS version, and things appear to work again on the CAS side, thanks!

Not sure why it took so long to address (over a year?!), but we again have the best calculator available on the iPad / iPhone!!

Seems the HP Prime calculator has become abandonware on iOS. Crash problems remain for months/years that have been fixed (or don’t exist) on the actual calculator. Example from user manual:  exp2trig(exp(i*x)). Crashes every time. Many other examples as noted in iOS store page user comments. Much frustration & low ratings. Paid $25. Expected better from HP.

Any comments from HP?

Try, Reset, the virtual Calculator and then, put in CAS Mode, as ... 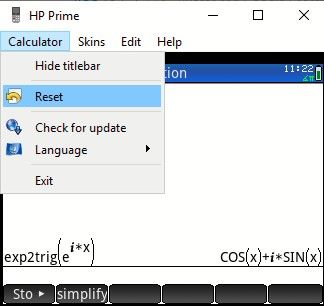 Returns an expression with complex exponentials rewritten in terms of sine and cosine. exp2trig(Expr)

Thank you for the suggestion.

It appears your screen shots are from the PC calculator emulator.  Unfortunately, the iOS version has no similar menu with a reset option.  I'll try uninstalling and re-installing.

iOS calculator was in CAS mode.  Just tried again and it instantly crashes.  Tried on an actual physical HP Prime I own, and it gives the correct results.

Just seems that the iOS version (even though fairly pricey at $25 for the "pro" version) gets little attention as far as updates and fixing problems.  Very sad, as it could easily be THE BEST virtual calculator in the app market.

I'm contact with the moderator of this Forum, for intend help to you across the creator's of HP Prime App, for iPhone/iPad.

I have a request from @Maké  asking if you could please assist this customer kcnicho  due to "Apparently is a error in the firmware of the App, of iTunes."

I have tried deleting the HP Prime (pro) app from my iPad, and re-loading it from scratch, using all default settings.  Still immediately crashes when I try to calculate exp2trig(e^i*x) in CAS mode.  Verified this works on "real" calculator, as well as the PC emulator.

Thanks for your help

Just checking back in.  Haven't seen any activity recently.

Any updates?  Is the iOS crashing issue being worked on, or is it even "in the queue"?

I've seen a few other posts on other forums with the same issues, so I'm pretty sure it's not just me.

Please let us know how things are going out there.  Active communication with your customers goes a long way.

I purchased HP Prime Pro on iOS. I have the same issue. I tried on iPhone and iPad. Both crash with HP Prime Pro v2.1, when doing any calculation in CAS mode.

The same is true for me. In CAS mode simply digiting 'x' and then pressing 'Enter' make the app to crash.

I use real HP Prime at home, Android HP Prime Pro on my phone with android 5.1, IOS HP Prime on iPad Pro 12.9 with latest IOS, and windows Virtual HP Prime.

On my own I have had problems with Android version of HP Prime, but with the latest update the problem gone.

But on iPad the problems in CAS still persists. Any operation in CAS mode can make application to crash.

One of my simpliest example is as follows:

It looks like the latest updates of IOS do not taken into account and IOS version of HP Prime Pro is simply incompatibe with the latest versions of IOS. I think this can be verifyed by setting the IOS HP Prime Pro on device with old IOS version and check the same tests there. Unfortunately I do not have any device with the old IOS onboard. If anyone can test this please reply.