I forgot to turn off the CAS mode when calculating on some chart, but found it returned some weird results which doesn't make sense. 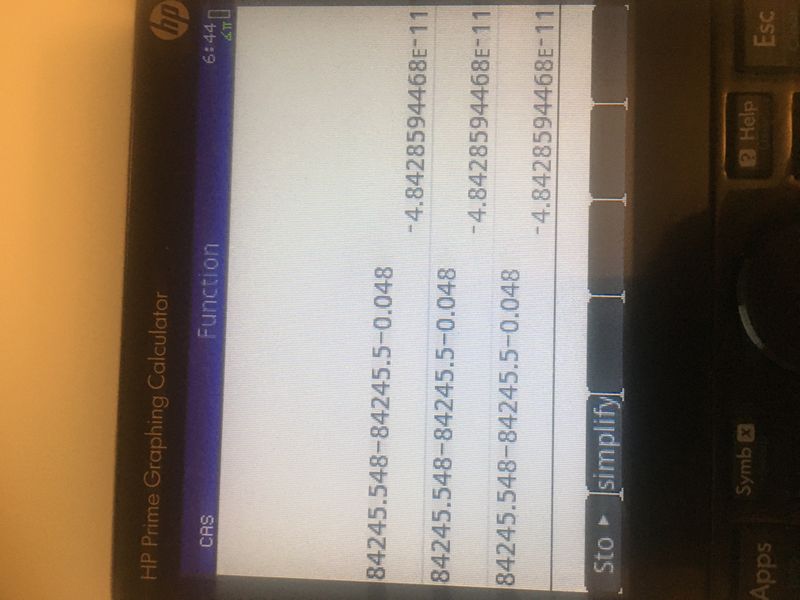 Without CAS mode enabled, this would not occur. As the result should be 0 in this case.

No matter how I change the settings in CAS mode, it would not output a correct result.

No, it's not a bug, but is due to the way that CAS uses binary floating point numbers instead of BCD like Home does.  A simple example of this unexpected but understandable behavior is this:

This does make sense if you keep in mind that CAS represents floating point numbers in binary (not in decimal) using 48 bits for the mantissa, and although 0.5 can be represented exactly in binary, 0.3 and 0.2 cannot, which leads to inevitable roundoff errors.  Same with your example; none of the three numbers in your example can be represented exactly in binary, so CAS uses the best it can do using 48 bits.  The format command helps reveal what's going on:

format(n, "a12") means "Show me the internal binary representation of n".  The above example means "0.5-0.3-0.2 in CAS gives a result which is exactly equal to 2^(-49)".  So that's the smallest possible error for approximated inputs like these, so CAS actually did the best it could.

People often recommend using the exact() function in CAS to convert floating point reals into exact ratios of integers, but I try to avoid that, since the output of exact() is only an approximation of the input, and so it too can introduce unexpected roundoff errors into a calculation.  Just avoid typing decimal points in CAS and you'll get exact answers.

Thank you very much for your detailed explanation! learned a lot from your reply.

But it's still kind of annoying to pay attention to current mode when starting using it. Hope developers could make some optimization if possible.

Anyway, thank you again for your kindly help!