i am looking for help with hp's tech support I don't know where to go or call ,I have purchased  a brand new pavilion desktop and the pc tower didn't work so I called the tech support number and they told me they would send me a shipping box to return it for service repair,in the box where directions clearly stating  to send the power chord with the pc tower,so that's what I did and upon return of my pc tower they did not return my power chord(there is 2 parts to this chord 1 which plugs into the wall outlet and the other which has a big black box inline with the chord) I called tech support back again to ask the whereabouts of my power chord,they told me they would send the original chord or a brand new replacement .

3 days latter no chord I called them back again a 3rd time and the operator assured me they will search for my chord or replace it quickly! 2 days latter they did send me part of the chord the one that plugs into the wall outlet and i didn't get the second part back the one with the big black box inline!

I called tech support again for my chord  and to no avail!

I called them again 3 days latter  and talked with a supervisor  she said they would take care of this within 2 days,well now that time has passed  and  still no power chord!  I really just don't know where to go or call for help on this issue!

Clearly hp is very unprofessional  and it seems they are just giving me the run around ! From a very dissatisfied  customer!Anyone out there with a similar  problem?

This has been over a months time now  and i have to cancel my brand new Internet service which I can't use now because of all this I cannot buy another pc since my money is tied up with this up pc! 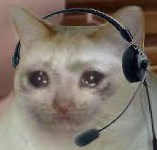 The agent you spoke to should have created a service order for the AC adapter and a second one for the power cord that plugs into the wall.

Feel free to call them back and repeat what I just said 50 times until they understand. If both orders have been placed, it can take up to 7 working days for it to arrive.