Hi, I have a z6100 printer but when I try to print to it it keeps telling me that the file is in an incorrect format. It’s driving me more than a bit mad. Any help would be appreciated. 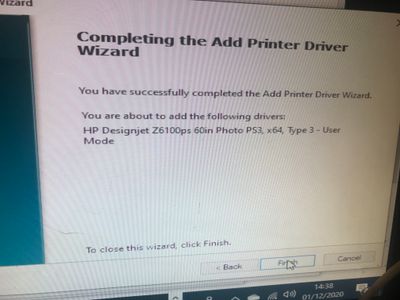 What file type are you trying to print and what program are you printing from?

Are you printing from the EWS?  I get that same message when I try to go through the EWS system on the web .

How would I find out if it’s PS?

Should have it right after they Z6100 name on the front of the printer.  Or you could use the front menu on the printer and find the page that gives the specs.  It will say either "Z6100" or "Z6100PS".  I would suggest you use the menu rather than rely on the front name plate.  I have a 4500PS that does NOT have the PS after it.  Loaded the wrong driver and kept getting the same message.  Once I checked the front panel menu, I discovered I had loaded the non-PS driver instead.  On mine, the doors are easily replaced and that may have been the problem, replacing the door from an non-PS model.

The picture you posted says you're about to load the driver for the PS model.  I don't think it will work in the non-PS models; it will give the error you're seeing.

Thank you everyone for taking the time to respond and help. I got it sorted finally. I’m new to  this and I’m sure I’ll be posting another question some time 🙂 please be patient.