Bang & Olufsen shown on tray but no response. Tried installing conexant  drivers but no help.  Windows keep installing their generic audio drivers.   Therefore, computer speaker works but not the 4 B & O speakers and no equalizer.

Downloaded new bios, and all other suggested updates to be sure.

What to do next?

What EXACTLY is your Envy 24 all-in-one  ? Have you try Realtek driver (not Conexant) ? Hope the following software works

If not, please post back what is your machine.

My computer is the HP Envy 24 n000nk Touch Smart all-in-one.

Conexant drivers seem to work for the computer speakers but not for Bang & Olufsen.

After numerous tries, sometimes windows loads its own drivers or says best is installed.

On the Device Manager window there are two places for speakers listed.  I tried different drivers at both places,, i.e., Conexant and Realtec.  So far no success.  B & O stopped working, I believe, after one of the Windows updates.

Maybe deleting the device then reinstalling is the solution.  But, I will need source for the reinstall of the device--that is the speakers.

Ok, there is ONLY one Audio software and  driver for your machine on the following link

(a) Download driver from above link and save on your machine,

(b) Go to Device Manager to uninstall BOTH Realtek and Conexant then reboot,

Hope this fix the problem as shown 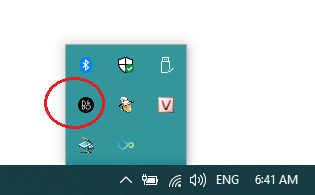