Everything worked fine until a couple of days ago.

Now, streaming audio does not come out of the front jack. Rear jack is fine. 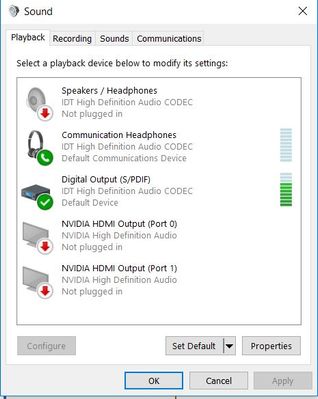 If I disable the Digital Output, sound DOES come from the front audio jack (so no hardware issue). BUT keyboard volume buttons do not work. In that mode, volume must be adjusted by opening the appropriate window and using the mouse.

I can't seem to make the front jack the Default Device.

I do not know of anything I did to preciptate this. No new software, nothing. Just came back from vacation and that's the way it was.

May the Forums be with you! It is a great place to find the help you need, from other users, HP experts, and other support personnel. I understand that after coming back from vacation the front audio jack is not working. I am happy to give you a hand with this.

Since it was working before you left, it could have been an automatic update that is the culprit. As a test you can try HP PCs - Using Microsoft System Restore (Windows 10, 😎, and roll back to a restore point from before you left on vacation, if there is one available, and see if it works.

Please let me know whether that works for you, and if it does resolve your issue, please mark this post as a solution. Kudos would also be appreciated.

Malygris1
I work on behalf of HP
Please click Accept as Solution if you feel my post solved your issue, it will help others find the solution.
Click Kudos Thumbs Up on the right to say “Thanks” for helping!
0 Kudos

Thanks for your reply! There was indeed a Windows update.

I was able to follow your directions for a system restore, but I have a question before I click 'finish' (i.e. restore to a previous point).

If I undo the changes made by the automatic update, won't Windows simply want to put things back? (Since after my restore, I will not be up to date with latest patches.)  Also, do I really want to undo security fixes??

Is there a way to more precisely target my specific problem?

Thank you for the reply. You are quite correct it will try to install those updates again. My initial intention was to see if it was an update to blame. Now that it seems to be confirmed, what you can do depends on the version of Windows 10 that you have installed.

Here is a Microsoft document which includes information on how to prevent a particular update in Windows 10: How to temporarily prevent a Windows or driver update from reinstalling in Windows 10 - support.microsoft.com.  This is very useful if you know which one is the problem child for your system.

Also see: How to Prevent Windows 10 From Automatically Downloading Updates - howtogeek.com, which shows various methods you can use. It is likely that the one you will need to do, is the metered connection. The important thing to remember is that if you have multiple network or WiFi connections, each will have to be set as metered, otherwise Windows 10 will automatically use and run the updates with the open connection.

Malygris1
I work on behalf of HP
Please click Accept as Solution if you feel my post solved your issue, it will help others find the solution.
Click Kudos Thumbs Up on the right to say “Thanks” for helping!
0 Kudos
Tags (2)
View All (2)

I think it will be easier for me just to plug into the rear jack . . .

Just chalk it up to Windows Frustrations.

I thought that I had resolved this problem. I have an HP Envy Phoenix with Beats Audio. After installing Windows 10 over my old Windows 8.1 my left stereo speaker stopped working.I went to the HP Driver website for my model of computer (810-230qe) and downloaded the newest IDT audio driver.*(see notes at bottom) The speakers started to work correctly but now the front audio (Beats) audio jack stopped working.

I chatted (text) with HP support and he said to go to MS Device Manager, open Audio Inputs and Outputs and Uninstall the IDT Codec with right click. Then go up to Action menu and scan for hardware changes. Which reinstalled the two IDT Codecs. I rebooted and it did not solve the problem with the front audio jack. Rep was gone after reboot but had suggested that I might need to go back to Win 8.1. Yah, right, great idea. That's not going to happen.

[I deleted a couple of original paragraphs below. I'm editing this post so many times that it is starting to feel like this is a blog.]

I am editing this post because my problem was not solved with the idea that I had here. I contacted HP Support phone line and the woman that answered worked on my PC. What she found was that my NVIDIA card is connected to my HP monitor with an HDMI cable. That cable was carrying the video from the card and also the audio to the speakers in the HP monitor. That input was conflicting with my external speakers plugged into the green audio jack on the back of my computer. She used the Windows Sound Properties box to disable the HDMI sound, without touching the HDMI video and that solved the problem of the external speakers working. I suggested that we completedly disable the HDMI sound by using the option in the NVIDIA control panel and so we did that also.

I only have one remaining problem that I did not find until I hung up with HP Support. My Beats Graphic Equalizer does not work for my speakers or for my headphones. Something is wrong there and I will try to fix it by reading these forums and verifying that I have the latest audio drivers. If I can't figure it out I will call the HP Support line again. (See update below.)

*I thought that I had installed the latest HP IDT audio driver for Windows 10 64-bit. When I opened Windows Sound Properties box and looked at properties of Speakers/Headphones, it shows that I have Driver Version 6.10.6496.0 but I am sure that I downloaded and previously install the newest Driver Version which is 6.10.6504.0 REV A. The new driver install package is called SP71717.exe. I tried to run the exe again and got a message from the installer that the files were already installed. I'm trying to figure this one out.

After reading the forums I saw that you must run SP71717.exe as Administrator. I found the directory location of the file on my PC and right clicked on the file and chose "Run as Administrator". It gave me a warning that the files were already installed but I chose ignore all error messages. After running the file as Administrator, I rebooted the PC, went to Speakers/Headphones, drivers and now I see that my driver is now showing as 6.10.6496.0. That was great but the front jack was not working and the speakers were working. All was the same as before.

I then did what the earlier HP Support rep told me to do which was to go to MS Device Manager, open Audio Inputs and Outputs and Uninstall the IDT Codecs with right click. In Device Manager I also scrolled down to Sound, video and game controllers. I right clicked on the IDT Codec there too and chose Uninstall for that one. On that one, I did not check the box that says something about removing the driver and just used the Uninstall. Then I closed the window and rebooted the PC. When the PC restarted I tried the speakers and they work correctly and Beats Graphic Equalizer works correctly. I plugged in my headphones and the headphones work and the speakers turned off. I unplugged the headphones and the speakers came back on. In the Sound Properties box the headphones are showing now as Headphones and not as Communication Headphones which is fine with me. It seems that the the Beats Graphic Equalizer works with the headphones but the range of control is not as great as with the speakers. It seems that all is working good enough for me for now. I hope that this helps you.