My PC suddenly decided it didn’t want to access the internet a couple of days ago.  All other home PCs and IPADs were still able to access the home network and the the internet.  I decided to to take the PC off the network and reboot it.  When I tried to do this instead of rebooting I get the HP splash screen and it won’t go any further.

I have run the HP PC Hardware Diagnostics UEFI and the Extensive Tests do not show any issues, passed all.

I have also tried to use a restore point but get an error that says “the reset did not complete successfully, failed to start the original copy from the restore point. An unspecified error occurred (0x80070091)”.

i have not recently added any new software as I can see from reading about the problem that might be an issue.

I was thinking I might do a backup of files and restore (or whatever it is where you delete and reinstall everything) but was was hoping not to have to go out and buy an new external hard drive to do the backup only to find that I still couldn’t get past the splash screen after the process.

it is a 5 year old PC  but if possible I would prefer to keep it running as my grandchildren use it regularly when they visit and my grandson in particular has his Steam games on the PC.

Also I just went to Exit from the HP UEFI screen and I get the following message “ERROR: No boot disk has been detected or the disk has failed”.  This sounds terminal 😂

Advice sought, thanks all.

While this seems contradictory ""Also I just went to Exit from the HP UEFI screen and I get the following message “ERROR: No boot disk has been detected or the disk has failed”""  to this  """I have run the HP PC Hardware Diagnostics UEFI and the Extensive Tests do not show any issues, passed all."""

We assume the PC is not lying but mis-leading.

At the age of 5 the CMOS/RTC battery can be fully discharged and cause problems, a Coin sized cell that costs a coupla quid.

OR the software has an issue.

The coin cell keeps the time and hardware list, so if it has failed the time and date are set to 1980/1998 or similar.

After the PC has sat disconnected for a few hours, a look into the BIOS settings will indicate error or no.

So if you could give the SKU or a more specific Model number and the Operating system that would help.

In relation to your comment about it being contradictory, when it initially happened I googled and then ran one of the HP diagnostic tests and everything showed ok. Last night, after googling further about the issue and because it was still not working I ran an extensive test.  It was only after running the second set of tests that the message “no boot disk..” appeared.

I saved the test results from the second set of tests and can forward them if required.

Thanks for your assistance.

Well we will go forward with concept of a failed Hard Disk.

If it is a Desktop, and it has more than ONE point to connect a Hard Disk then that simplifies things. 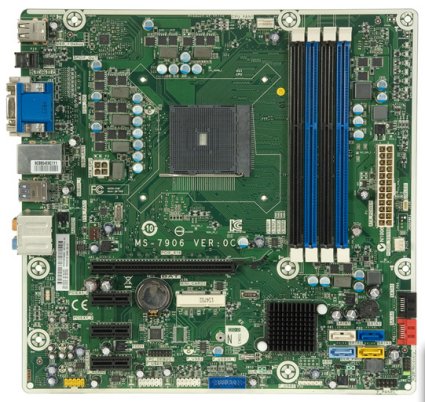 And it says  6 x SATA 6 Gb/s so it is possible to fit another Hard disk onto the Motherboard and copy/clone anything on the old one that is still there (Lower RH corner White, Blue, light Blue and Yellow make 4).

You will need to make an install DVD/USB using the Microsoft Creator tool.

They can be be downloaded and 'burnt'/expanded to a DVD/USB.

But may enable a repair to be started.
https://www.microsoft.com/en-us/software-download/windows10

and a HOW2 is here...
http://www.thewindowsclub.com/install-windows-10-from-usb

So what do feel about your next step, a leap forward or one step back?