So, I've been through this whole rigmarole before. First things first, I use my PC for gaming. Nothing really intense, but about mid spectrum.

Basically, I currently dabble in League of Legends and Eve Online on pretty mid/low graphics settings. The problem is, whilst playing these games, my PC will restart randomely, as if the plug were pulled out of the back of the computer. It's completely unpredictable when it happens.

I've looked into countless things, starting with the BIOS, someone told me it could be the old BIOS not routing power properly, so I updated the BIOS to the latest version. I then moved on to monitoring my CPU and GPU temperature, which all in all seemed pretty fine until today, when I read here on the website that the package should maintain 35C or below, that which it is almost always cruising at a solid 50C (which seems to be normal for normal PC's).

Now, I'm using this PC right now to type out this thread, it's doing quite fine without the games running, which leads me to believe its the CPU or GPU, however, sometimes when my PC shuts down, it will reboot and shut down again at the login, or before I even get anything running.

I tried underclocking my CPU using the Intel Extreme Tuning Utility (XTU) but that didn't seem to change a thing. I tried disabling the Intel Turbo Boost by capping the power supply to my CPU at 99%. I must also mention that while trying to perform a benchmark on the CPU through the Intel XTU, my PC did shutdown during that.

I don't quite remember all the troubleshooting I've done because of how long I've been dealing with this issue. I'm not a very tech savvy person so I can't rule out the possibility of the issue being one of the various things I troubleshot above.

Kind of just winging it at this point.

I posted to this forum a while ago and didn't get any responses, so here I am again, hoping for a miracle.

Let it be known (pretty much) the idle package temperature seems to be 55C. (Intel XTU Screenshot Included) 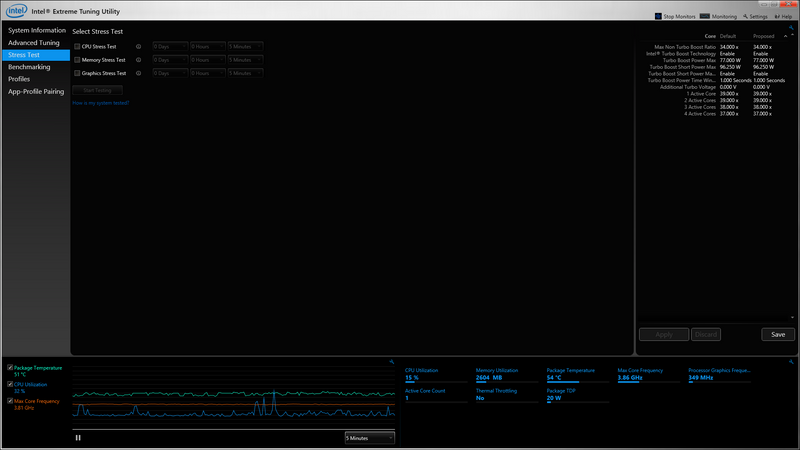