I'm having the same issue with my HP All-in-One 24-cp0158qe with the BIOS update that HP's own "HP Support Assistant" on my computer wants to install.  I didn't seek out a BIOS update.  HP Support Assistant software notified me of the update and wants me to install it.  It seems there is something wrong somewhere with HP's installation process. 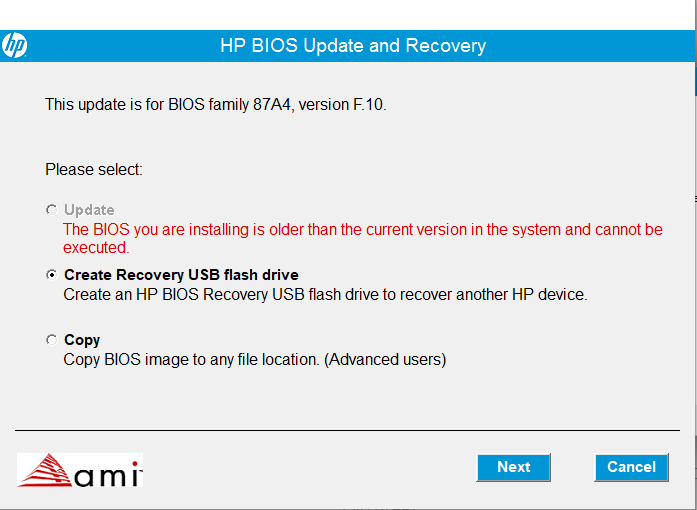 I have the same question
3 REPLIES 3

@PaunchyPirate Let's perform a power reset as per HP standards:

Thanks Riddle for your help.

I've done what you suggested (both the power reset and the BIOS recover/update instructions  you provided).  After doing both, the BIOS still will not update to F10 with the same error (Attempting to update with an older version than already exists).  I've tried the update from inside the HP Support Assistant tool and also from outside the tool in Windows.  Same error.  I'm not going to attempt the 3rd option using an external USB drive.  I'll wait until HP decides to figure out why this happens and updates something on their side.  I've spent too much of my valuable time trying to do this update.

@PaunchyPirate If none of that helped, I'm afraid this could be a hardware malfunction and I suggest you talk to HP support and discuss your options, follow the below steps to get started:

2) Click on Sign-in or select the product using the below step:

3) Enter the serial of your device.

4) Select the country from the drop-down.

Fill the web-form, to populate a case number and phone number for yourself!

Also, if you are having trouble navigating through the above options, it's most likely because the device is out of warranty, if yes? please send me a private message with the region you are contacting us from,