Ran the BIOS-based Quick (or Fast, can't tell what the difference is, both say they run in 3-5 minutes)  hardware diagnostics test, but it took close to an hour.

Then, Windows would lock up at some point, from a blue (NOT BSOD) screen with "Please wait..." message to the desktop showing up.  Attempted to boot from a DVD but the bootable DVD was not an option in (F9) Boot menu.

Was able to update the BIOS to A0.59, but that brought no changes to the behavior.  Defaults were selected after updating.

Swapped back to the original HDD.  It booted, and in reasonable time based on all the software installed (with Startup entries)!  However, the NVIDIA driver shows up with a Code 43 error.  After attempts to remove the device and delete the software, Updating the driver keeps stating that the best driver (NVIDIA) is already installed. And while that driver was not current before, it is now the 2019 version (26.21.14.3107). 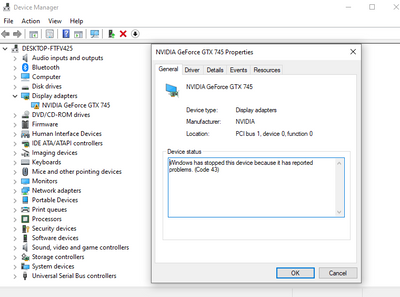 AND SO My questions would be:

Any answers would be greatly appreciated.  Help!!

I can answer questions two and four for you, which I guess is better than nothing.

In order to boot from a DVD, on a PC that come with W8 or newer, you have to go into the BIOS, enable legacy mode and disable secure boot.

See this link for the settings to change.

Make the bootable HP PC HARDWARE DIAGNOSTICS 4-IN-1 USB KEY at the link below...bottom center of the webpage.

For the nvidia driver, did you use the one directly from Nvidia?

I would imagine that your control panel>programs listing would have the same 3 programs since you have the same GeForce 700 series graphics card that I have.

You should uninstall any Nvidia software you see in the control  panel>programs window.

Paul, thanks for the reply.  I do hope to get other answers as I think they're more critical to why this beast of a PC is quite sluggish.

Will try the Legacy option, though when the PC reboots, I can F9 for a boot menu and it lists Legacy but nothing under it.  Will try by your direction later today.

As for NVidia, the only thing **now** showing, as nothing was there yesterday, is:

So, I'm not sure how to *uninstall* the actual drivers, because the option at Device Manager does not seem to work at all.  Even deleting every, and I mean every NVidia folder on the C: drive did not seem to affect the current driver situation.

I think there is a strong case for rebuilding this PC from either the recovery partition or a new SSD.  I know it's 4 years old or so, but with the i7 core and 32GB RAM, it shouldn't be stumbling around like it is.  Something really seems amiss with the original HDD.

Yes, if I were in your situation, I would be clean installing W10 v1903 from a bootable USB flash drive made with the W10 media creation tool, and installing the latest chipset installation utility driver directly from the Intel site and the latest graphics driver from the nVidia link I posted.

If that didn't fix all the issues, then I would invest in an inexpensive but good performing SSD.

Your PC should need tethers to keep it from flying away with the nice hardware it has.

6th gen core processor and 32 GB of memory...should be flying.