I want to add a secondary drive to my OMEN.  I know I can add an SATA SSD but want to know if I can use a PCIe adapter NVMe M.2 on the available PCIe x4 slot.  The specifications say that the slot is a single lane but it has an x4 slot.  I'm trying to figure out if I will get more throughput adding and M.2 using the adapter or if I am better off using the SATA connection.

I've tried to look for the motherboard schematics to understand how the second PCIe is connected and if there are any drawbacks like disabling the SATA connectors, but can't find the motherboard description or diagram on the web.

Does anyone know if I can do this?  Since it is a single lane are there any issues.

which shows it has

@banhien thanks.... I didn't want to take off the cover plate (SSD2) as it won't lift easily but read in another post it is adhered with double-sided tape.   I also read that the second slot may be in Raid mode.

Since this is supposed to be upgradeable, is there more documentation on this board like such as single line schematics that is publicly accessible?  I took a snapshot of a board advertised on eBay that matches mine showing the two M.2 socket 3, key M (for SSD card PCIe x4 Gen 3) locations one above the PCIex16 and one below with a plastic cover and labeled SSD2.  The one M.2 socket 1, key A seems to sit below the SSD2  and is populated by a wireless card.

How can I tell if the 2nd slot is in RAID mode? I tried going into the bios but there is no information there. My last question is on the free PCIe 3 X4 also shown in the photo...is it really single lane or 4  lane based on the X4 designation?

Your assistance is appreciated 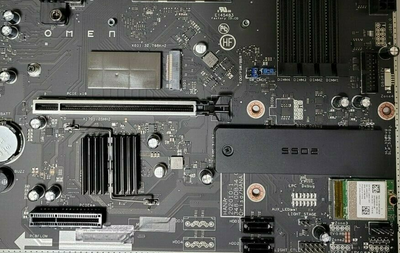 Currently it only has 1 drive, you need 2 drives for RAID .