SLOW USB 3.0 ports!?! (See read another post about this too)

I saw a similar post in another topic regarding speed of USB port on a Omen for file transfer. (same issue).
The so called techs suggest things that were a joke.  Later a 3rd tech said the user would send a HIGH FIVE!?
I thought for what?  the problem was never solved.  They then requested that it go PRIVATE?  I guess so no one can read that it was never resolved.   SAD. I've had the machine 1 month. It's it returnable for refund?

Device manager reveals 2 ports are superspeed.  Can you tell me which USB ports on the box those would be? I tried several and the fastest was 512mbs while the 2.0 were about 1/2 that.  I need 800mbs for VR.
Two are superspeed? (3.1?)
The one marked 3.1 surely would be fastest and I would assume this is the ONE USB "C" connection. Which I'm trying to work with.  Through an adapter on the cord to test the other ports didn't find anything faster than 515 ish mbs. = (

ODDLY ONE test showed 1.6gbs.  So what is throttling it down? 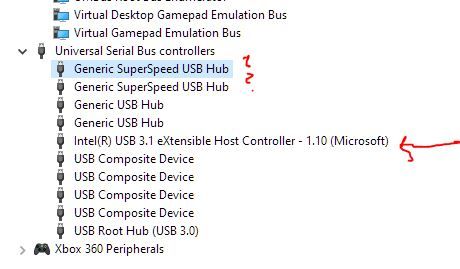