Left side of screen is darker sometimes.

I've had the computer for about a year. Several months ago the left side of the screen would go dark at random. It's like the backlight is dead on that side. At first i assumed it was just a dead screen. The problem is it will come back on at random. Sometimes a restart will fix it. I've tried reinstalling the graphics drivers, but every fix is temporary.

Does anyone have an suggestions? 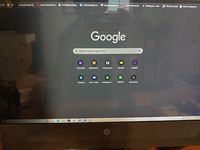 The same thing happened to my desktop two weeks after the warranty expired. Probably a problem with the back light.

The screen works right now but the problem comes and goes, most of the time the error is there!