intro
I’d  the chance of getting an second hands HP Z1 device for a reasonable price.
(Gen1 , with 16GB ram/ Xeon 1245v1)
The machine had some mystical appealing  to me.
It was different and on paper it could give a puch too.
But like many other computer enthusiast among ous, we like our computer to do everything.
Everything  good that is..
Soo I wanted the Z1 to be good at gaming too.
On paper this machine is very easy to upgrade, well unfortinally like other Z1 owners already know.
The upgrades  that are supported aren’t that many, and very expensive to get.
And for a decent graphics card I needed something more than a gtx680m, the fastest card official supported.
Here is my story and the hurdles to take. It’s still work in progress, but I wanted to share this story with you.

What grafics card to get:
Well if you want to have some decent punch for your games, you need a  heavy card too.
Soo I searched for the fastest mxm card to date, the gtx980m @8gb
(there’s a new mxm gtx980 card announced, but that’s another story)
Very quickly I realize that the prize for an gtx980m was astronomical.
And the only place you seem to  get those cards is from a few people on ebay.
I live in Belgium and most of the cards come from Usa or Canada, and aside from the high price to buy , you have a big chance your package gets screened by the customs so you have to pay 21% tax on that price and also a fine , that boosts you total price for that card around 800 euro’s.
Too much ofcoars.
And nobody like to  buy stuff on ebay for that amount  of money,.
You never know what can happen with your goods , after you paid the price..
I contacted some official laptop builders , if they wanted to sell only the  gtx980m (Eurocom and BTO), but no response.
Another option was to buy a laptop with the gtx in it , and sell the laptop afterwards, which was a pretty good alternative, IF you can find a good buyer afterwards ofcoars.

But then it just popped up on ebay. A seller in france who had a gtx980m. 570€
Still a lot of money, but since you don’t pay abroad shipping tax in Europe, the best deal
I bought it, and when shipped to Belgium , the package got lost  in transit cause of an strike from the Belgium posting workers.
The horrors!  Will I get my card or do I loose my money?, in which condition does it come etc.
Finally  after a week I got the card in my hands.
But the story isn’t over yet
The X –bracked on the back of the gtx980m.
On my model there’s a X support bracket attached to the card.
But with this bracket it’s impossible to mount the card into the Hp grafics cooling Module.
And I don’t get it off.
Since the delicacy of the card. I don’t want to ruin it by applying to much force on it.
I have read some info that people DID remove that bracket by using an hairdryer to loosing the glue, and then slowly pushing the bracklet off.
I’m still looking for information on what’s the best way to get this x bracket off.
Anny suggestions  anyone?
Story continuous….

pic I  found on the internet...

My K5000m came with X bracket as well and I removed it with a hair dryer.

Was not hard at all, but required a little bit of patience and a little force.

I'd advise you to buy a 1.5-2mm thickness thermal pads and custom cut it for mosfet and VRAM,

But... I would never buy a 980m, not because I have no money, just for the reason that it is ridiculously overpriced and nVidia or OEMs should be **bleep**ed for that.

Not sure if you've gotten the X-bracket off yet... like the other posted said, it takes time and a little patience.

Some cards the bracket is barely attached; others are like they are super-glued on 😞

You can warm the glue with a hair dryer - just be careful not to get to close to the card or have the heat to high. What I normally do is use a very fine flat-head screwdriver to gently pry up once corner, then use needle nose plier to grab the bracket and pull up gently.

For other Z1'ers who want to get the 980M, I'd recommend rjtech.com. If you have the type-B cooler with the thermal pads, use those. If not, use the blue ones you get with the GPU and I'd use DiamondIC7 paste - others look like something had the trots all over the place when the machine heats up 😉

I might be wrong, but I believe the drivers from NVIDIA won't work yet, you'll need to modify them yourself. If you need instructions for this, just ask and I'll post them.

Today I have some time on my hands to  try the hairdryer method.

i had the idea to make a little device that pushes the x bracket from the back in combination with the hair dryer.

I will trie to document this for future references 🙂

My biggest concern is that the wind from the dryer can created static buildup on the card, so  i have to make sure i have a good contact on the card and the groud at all times.

Well I did it!

Here's a link to my video :

I wanted to upload it to  youtube but google wants my phonenr, so they can send a security code... wich they don't get from me :catmad:

Time to order a free sim card just  for that  🙂

Next step is to attach the gtx onto the cooler typeA.

first I had to  clean the cooler , since there was some thermal paste residu. 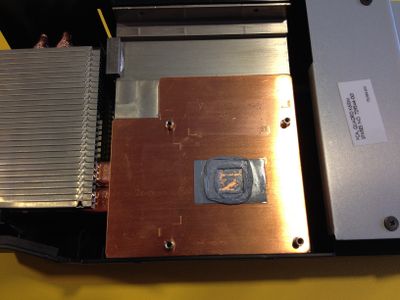 I picked up some isopropanol cleaning alcohol (100%)  from my local pharmacy.

After some rubbing the paste whent a bit softer and i  could peel the rest of it with some plastic card.

Now after cleaning there's seems to be a little copper square on the copper heatsink itself. seems like some copper sticker of some kind.

Anyone a idea what to do with this? Leave it on? 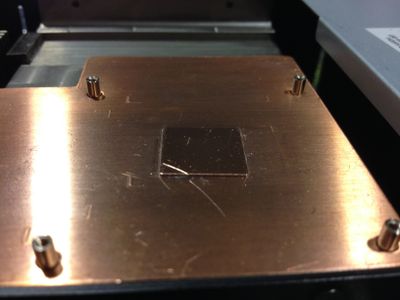 You can't remove the square - it's is firmly attached I believe + it fits onto the GPU chip itself.

Let us know how you go.

I was reading your post about modifying nVidia drivers for an nVidia 980 card for HP Z1 computer. I have several HP dragon laptops (hdx9000+ series) that have nVidia 8800m cards. The problem is HP stopped driver support of these drivers after Vista. When trying to use nVidia drivers, they conflict with adobe flash, that makes them continually lock up. So, you can either run the drivers or flash, but not both. Do you know of a way around this? I wish to run Windows 7 instead of vista due to other software requirents.

I don't now much about that  problem.

But what I  know is that  you can disable hardware acceleration in the flash options.

That  way the  videocard does't help to get flash on your screen.

But then again, you probably tried that in the first place...

No, I did not do that. I am not so familar with softwares like flash. Things like this I just take fror granted that if your pc needs it to run, it should already be configured correctly. My mistake. Maybe flash is as bad as java, which has also caused me headaches. Thank you for the suggestion. I will try it.

This is the Z1 Workstation forum but... the reason HP stopped updating the drivers is NVIDIA did - those 8800M cards are quite old now. Your best bet would be to ask on another forum. Sorry I'm not much help.