Idk it’s on ‘sale’ for $200 from 2200, I’m just pissed off at how crappy of a build quality it is. If these crashes/force restarts start happening more I’m unsure what I’m going to do, but I’m hoping it’s some odd outlier and that nothing is wrong. I don’t want to spend another month trying to get help from HP. This same kind of crash predated the other failures for the first pc I had and idk what to do if it dies again. I’ve spent more time troubleshooting than I have actually gaming it feels like now.

Curious what type of failure you had? There is a possibility that it's actually a GPU issue, especially if you're getting bad artifacting. The 2080 and 2080 ti cards had a pretty high failure rate on launch, and predominantly for boards with a specific type of memory (I think manufactured by Micron). Mine has that, but I've thus far had no issues.

Hp doesn’t have this exact pc in stores anymore (from what I can see) so my issue is I can’t go and just replace it like I did the first time. I only got one crash so far but I’ll keep this post updated if I get more. GPU has been running better than the old one temp wise and performance, but it may be an issue with it but at this moment I am unsure. I was able to replicate crashes on the old machine by reaching gpu temps of 75-80 on any game and then a force restart/crash occurred. I haven’t launched a game since the last crashed (Stellaris). No artifacting as of yet.

Honestly think its the crap 500w Power Supply Unit they have in this thing. I've been reading around at that seems to be a massive issue. HP cut so many gosh darn corners with the PSU that I think the PSU itself is what is causing the crashes. HP 'says' it works fine, but Nvidia says no. I'd like to talk to HP support on this as I feel i'm being really cheated out of my money for such a cheap issue for them to cut corners on that can really screw over systems. Also CPU COOLING.. This is literally arcade mode on battlefront 2. I should not be seeing ANYWHERE near the 95 degree celsius my CPU peaked at. If I get another HP support response that says 'Oh it's built to run hot' i'm just throwing this broken thing out the window. Another update here, PSU fan is just going on and off very rapidly, hard to explain without the ability to send a video but it spins a very very minor amount and stops, and does this constantly. Unsure if thats an issue can't find any answers to that. I'm not that knowledgeable on computers and parts so thats why I bought a prebuilt in the first place, so I didn't have to deal with all of these issues.. 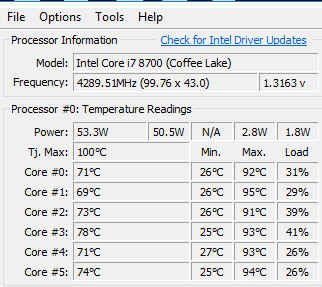 I've recently purchased one of these towers and bought a 120mm fan to blow got air out of the top. The mounting bracket can be unscrewed and has 4 plates with holes that you can stick a Phillips head screwdriver in to remove them.

I'm not sure why HP keeps the top vent blocked  by default when that would be the best spot to vent heat. I also have my unit on blocks as the clearance from the ground is absurdly small especially when the bottom is the only significant air intake.

How did you get a second fan in the case? On the motherboard I can only see one socket to plug a fan into and its in use. No clue on the PSU, but mine does the same.

Two options. Either get a splitter (which the Noctua I referenced earlier) or plug into the "water cooler" header. Or both.

PCs been running fairly slow the past few days, i've restarted it and everything but still. Benchmarks are much lower than they used to be through userbenchmark.. Anyone have any ideas why?