Going back and looking at the posts again, my assessment of your M.2 screw looks as though you stripped it as I pointed out earlier. Yes the NVMe case will work but has nothing to do with the screw. Did you get the screw removed finally? The picture looked like a lot of metal shavings were somewhat scattered on the board. You would want to blow that board off with air and get all the particles off of it in case you have some strange short caused by the metal shavings.

Its just a precaution. 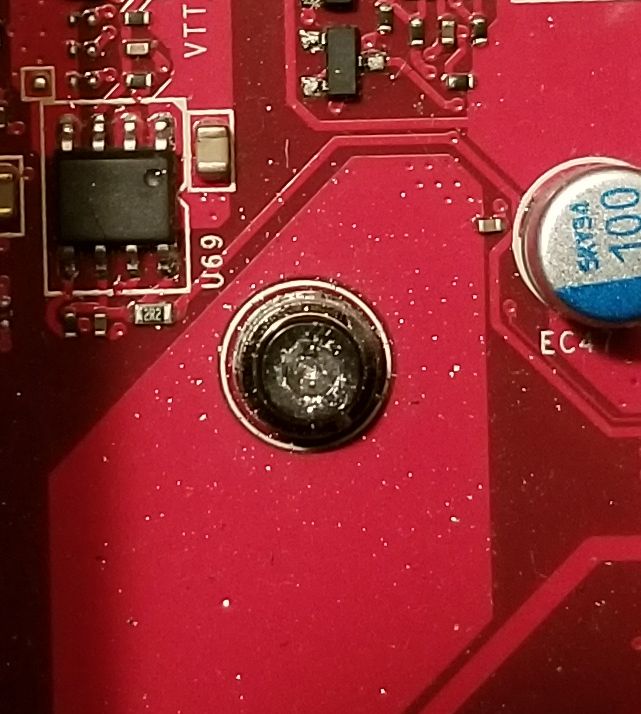 Is the 8 pin CPU power cable inserted all the way in next to the CPU?

Did you remove the CPU at any time? If so, you might have damaged/bent a pin and it can cause your issue also.

All other power cables are securely connected? Your ram has not been removed?

You could try re-seating all cables and ram sticks.

On a side note: how did you manage to install the cooler? Did you have to pry off the existing back plate from the motherboard to install the Corsair plate? If so, was it glued on or did it come off with no effort?

There was nowhere I could install a backplate as the back of the motherboard is just solid metal with no openings aside from the ones for cables.

But turned out I just needed to put the anchor like screws in the holes surrounding the cpu and install it without a new backplate. It stayed in place fine.

Will investigate that shavings issue...

But isn't it too little too late at this point?

Also I have not removed the cpu at all since I installed it.

Closest I did to that was reinstalling the old heat sink after my first failed attempt to figure out how to install the h60 cooler.

Then I applied 99% isopropyl alcohol to clean all old thermal paste, waited about 5 minutes, and then applied new coat of thermal paste before installing the cooler.

The fact that I'm still getting 3 long and 3 short beeps whenever I launch this points to this being a gpu problem, and now that I've installed a completely different one, with same results... well?

All cables installed perfectly, and until I installed the new cooler, the system was working well enough... I'd randomly get the beeping glitch but I had a good workaround for it that had been working until now...

Only issue is that cpu stuck between 50 and 60 C while doing nothing or playing most games... more intense ones got from 65 to 80 C

Did you also try re-seating the memory? That will sometimes fix the beep code issue.

is it too late on the metal shavings? NO or I wouldn't have mentioned it. Blow all the crap out of the case with air carefully and get it clean.

Dont use a standard air compressor and air hose unless you have a water filter/motor guard on the hose so no moisture gets all over the mobo. If it does get wet, you need to let it sit for a day to dry out before plugging in the power cord.

Having to revise this post as the thread is getting long and easy to get lost on what was done and not.

Originally I think you stated that turning off Fast Boot via the CMD solved the graphics card issue but now its not?

I would say the 2070 you purchased was at fault, but you say you've tried the original card back in and still getting the beeps. Is that correct?

At this point, not sure whats the culprit. It might be board related, might be CPU (very small chance though).

Resetting the bios makes no difference? You might have to take it in to a shop and have it looked over.

Bumped to reflect an edit above.

Actually I got a new card entirely this time, a 2080 that was on sale,  because I thought I'd screwed something up with the 2070.

I used one of those pressurized air cans, I tested it on my hand and there doesn't seem to be any moisture from it, so... I think  it's fine.

If this doesn't work out, can you recommend a more reliable board that is compatible?

EDIT:  for a variety of reasons, taking it to the shop isn't an option for me. Including that for medical reasons (from a decade ago) , I'm not allowed to drive.

can you recommend a more reliable board that is compatible?

Unfortunately, I cannot. HPs use proprietary parts like the motherboard and they don't sell them separately.

The biggest issue being the I/O shield on the back of the case. Its molded into the case. Then there's the case wiring to deal with.

IF you had to go a new motherboard, you might as well buy a new brand name case also that will fit the new board.

Your graphics card, ram, cpu/cooler, drive and PSU would be able to transfer over. You might have to purchase a new Windows key but those can be obtained cheap enough. I can PM you the web address.

The best motherboard would depend on your budget and the bells and whistles you want. You want a board that will fit the new case you buy also. Full ATX mid size cases are what I prefer but they will usually fit a MicroATX motherboard too. The CPU uses socket AM4 so any AMD Ryzen AM4 motherboard will work.

I would research online for what you are wanting. Example: https://www.gamingfeature.com/best-motherboard-ryzen-7-1700/ can give you a good starting point.

You can PM me if you have further questions about that subject.

I've reseated everything, done everything correctly as far as I can tell...

I've double checked all the wires, they're in the right place, I've placed the RAM facing the right way... I've done everything I can and now...

It just won't turn on at all

Ill send you a PM. Look for the notice in your email.