I'd like to ask if you agree with my FAN upgrade idea cuz the Nvidia 2080ti really needs more fresh air.

Components I want to use to upgrade the air flow:

So my idea is to replace the rear fan with an Noctua NF-A9 and to put on the filter below the Noctua NF-F12 PPC (just lying on the filter). To get them both working with the rear fan controll I'd like to use the Noctua NA-FC1 Fan Controller, which will be hidden in the HDD 3.5" slot. The good thing about the Noctua Fan Control is that it is safe for the mainboard since the power comes from the SATA connection. If needed I can set a constant fan speed if the mainboard fan controll ain't working like I like it to.

The CPU is already water cooled by the hp stock water cooler. There is no need for an upgrade. 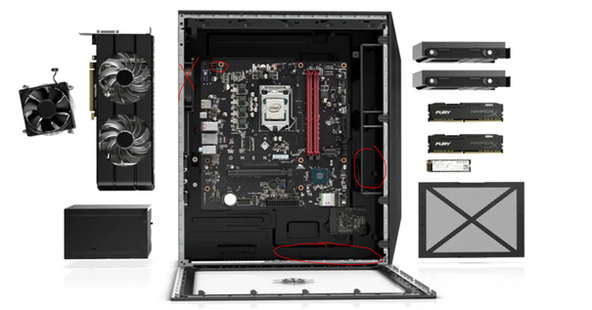 What do you say? Will it work or am I missing something?

@Ovecarleone , welcome to the forum.

If I am fully understanding what you plan to do, the 120mm fan will be laying on the bottom of the case with a filter between it and the vent on the bottom of the case.  This will be an intake fan.  The 92mm fan in front will be an exhaust fan.  Is the fan for the liquid cooling intake or exhaust?  This needs to be considered.  Here is a great video from Jayz2cents on airflow in a case:

Watch the video and pay particular attention to what he has to say about filters on fans.

This is required for the connection to the motherboard.  Here is the manual for the Fan Controller:  https://noctua.at/media/blfa_files/manual/noctua_na_fc1_manual_en.pdf

Take all of these things into consideration before you make your purchase.  I know that Noctua products are high quality.  I suggest checking with their Tech Support for help.  They are the experts on their products and how they will work best.

Thank you for your reply and suggestion.

Short Explanation, my omen obelsik has already a build in stock water cooler on top part of the case (as exhaust) which I'm not gonna change. What I want to change is the stock rear fan (exhaust) with an noctua fan and place a new 120mm fan at the bottom of the case as intake. Both will be connected to the noctua fan control which is a 4 pin (pwn) only.

The noctua fan control will be connected with the rear fan control on the Mainboard and the power for both fans will come from the sata connector which is in the HDD/SSD 3.5" free slot.

I believe I got it sorted out. The only question remaining is the clamp on the bottom, which I asked here: Can the Plastic clamp be removed?

@Ovecarleone, it won't do any damage if you can remove it.  Once you remove the cable bundles it should be easier to see how it is connected.  Just make certain that the cables are protected from the fan.

So, I've tried my idea and it doesn't work as I'd like it to work but still better than nothing.

What I've done now is to connect the rear fan (replaced stock fan with a nactua) with the system fan control. Two noctua 92mm fans on the bottom are powered by the noctua fan controller and set around 55% to 60% (1100 to 1200 rpm which is silent).

Anyway, the system doesn't get as cool as I'd like it to be but better than having hot air stuck below the 2080ti (which gets really hot). 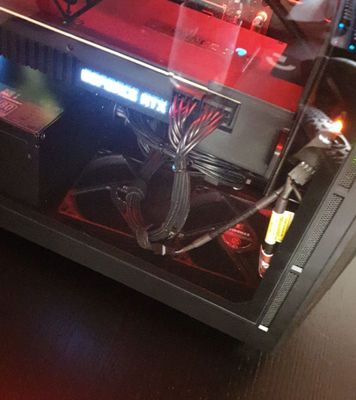 (took this picture before I put the cables better together. The fans are set now better on the bottom and the cable management seems also better)

Are the temps on the 2080ti better now? I play a bunch of heavy titles and end up always running at around 85*. Im looking into just buying a new case and transferring everything over and getting a better AIO for the cpu.

@Ovecarleone, thank you for the update.  I have to tell you, the fans don't look too bad!!  I hope they continue to work for you.l

@yobo2019, before you buy a new case for your motherboard, read this HP Knowledge Base article:  https://h30434.www3.hp.com/t5/Gaming-Knowledge-Base/Moving-HP-Motherboard-to-a-new-gaming-case/ta-p/...

Sorry for the late response.

I encountered some other issues with the system I had to work on first before I could think about the cooling issue.

The temps ain't really better. The BIOS must be set like this by HP:

- The moment the GPU reaches 84°C = stop the max power output and find a stable Clock, around 1550mhz

I believe HP did it like this because of of convenience. The microATX Tower doesn't give much air to breath so they had to find a point in which heat and stability work best.

I checked the Shire Z390 and it should work with any ATX Tower which is mATX compatible. If you move everything just keep in mind that you have to overwrite the GPU Fan speed with a 3rd party software like Palit Thunder Master. Just keeping the GPU in the Obelisk Tower at 82°C for max GPU Clock needs 65% fan speed.

But if I were you… just buy a new Tower and Mainboard. The Shire Z390 ain't good at all because you have just one CPU Fan and one System Fan control which can't be regulated.

Yeah, that's what I think I'm going to do. It's stupid HP will sell products that arent up to just basic qualifications for use. I have went on a few custom prebuild websites and almost none of them will allow you a 9900k with a single 120mm AIO or the cooling config they use in the omen due to "Thermal Throttling" lul.