It has been a while since anyone has replied. Simply ask a new question if you would like to start the discussion again.
Highlighted
Staticj
Level 3
23 18 0 11
Message 11 of 22
1,104
Flag Post

Beautiful response! I'm wondering how to get the right eyes to see this thread so an actual solution can be in development? The only support I received on this issue was to help fix the mistake HP's virtual chat suupsup rep caused. Since video editing and animation is a hobby of mine, not having use of 2.1gb of RAM is a big deal.

Here's a visual aid showing the information giving to me from where I bought the HP Pavilion 690-0024 and the results I got from running the Oculus Rift Compatability Tool: 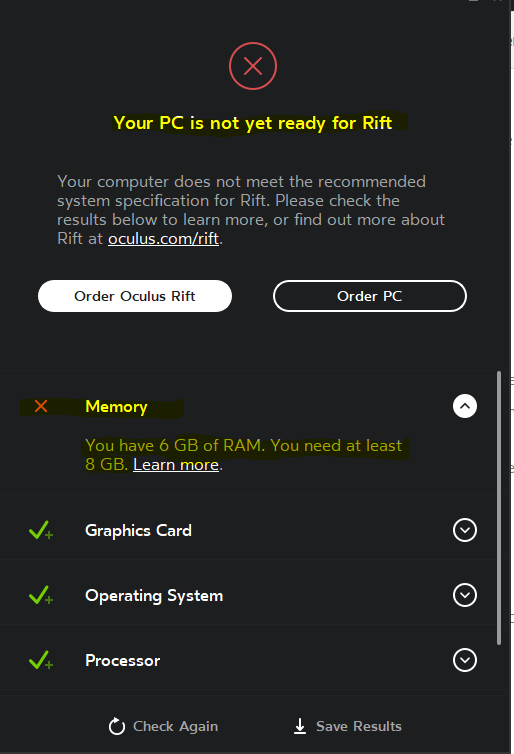 I have encountered this issue with the Oculus Rift itself, I actually purchased this PC along with an Oculus Rift at Best Buy, primarily because it was advertised as VR ready. The Oculus Software warned me I would have a poor experience in VR, and that my PC was not VR Ready, and I certainly did have a poor experience. After opening just three applications at different times in the same session in the Oculus Rift, the Oculus Dash slowed to a crawl, because it began using swap memory, since it ran out of system memory. I had to physically remove the headset, and restart my PC just to get it back to normal, but that didn't last too long either.

If HP wants to do the right thing and stand by the quality of their products, they could either roll out a BIOS update and fix it or offer those that are discontent another stick of 8gb RAM to compensate.

I'm guessing the second option would be less costly overall.

Again, I hope HP does the right thing so I can become a fan of their products.

Today, I attempted to compile LineageOS 16 on my Pavilion 690-0024. Unfortunately, I discovered that 5.8 GB of memory is not enough to compile an operating system with. As a result, I am unable to continue. Too bad i'm missing 2.1 GB of memory I paid for.

I completely understand what you mean. I use 3D animation software and RAM is critical for performance. Didn't Lineage OS use to be CyanogenMod for Android?

Yes, it did, it is still an Android rom, but it is maintained by a new team now, so they changed the name of the rom as well.

I know there's enough information that we've provided for the dev team to figure out what the issue is. I don't understand why it's being so difficult and slow to find a resolution to this important issue. Not having 2GB of RAM should not be something that is easily dismissed. Especially when 8GB is advertised.

I'm really hoping to see HP show true concern and provide an update. I also encourage all those that have same issue to respond to these threads as well.

I just asked for another update from HP on the issue.

Update: Its been so long since my last update from HP, I can't even talk to the same person anymore, so I doubt i'm getting anywhere with this issue.