The LapTop comes with 16gb of Samsung 2666mhz rams and runs fine with them. I bought a pair of

The computer boots with these rams and the bios recognizes the ram fully but I experience crashes while gaming.

After some crashes I tried running memtest and got 10.000+ error messages.

I tried to use 1 16GB module and 1 8GB original module, it also passed the test.

I tested the rams on a Dell laptop with a Ryzen CPU the rams passed the test.

AND the most important thing is I tested the rams on another same model HP omen laptop. It has the exact same problem.

I upgraded to the most recent Bios available. No effect.

I tried entering the bios but there is no relevant setting there either and since it's a LApTop bios it's pretty limited.

What can I possibly do to fix this ?

Definitely HyperX Impact is NOT compatible even it has same 2666MHz. You need to consider few other factors. Normal RAM on  an HP Omen (my Omen): 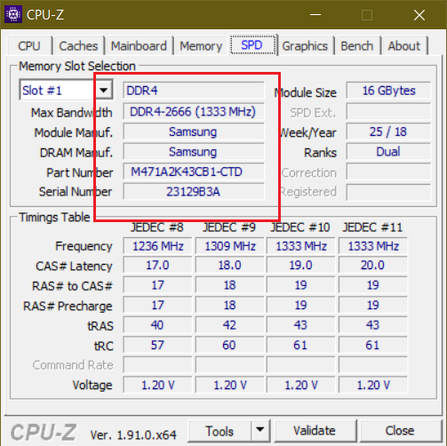 For example I installed 16GB kingston module alone and ran a full test. (Tested the other module too) No problems

Then I installed a 16GB Kingston module and an 8GB Samsung module. No problems.

The problem only occurs if both slots are 16GB Kingston.

My question is if they are incompatible with this LapTop or the motherboard in this laptop, why do they work when installed 1 by 1 or 16GB Kingston -8GB Samsung configuration?

Could the incompatibility issue be solved by a proper bios update ? Maybe HP can release a bios that can solce this problem and even test this issue themselves.

The red box you put on the picture shows the serial-part number. I don't know how they would affect the compatiblity, it just looks like a batch number.

Thanks for you reply and interest in the matter.

I can confirm, I have the same problem with exactly the same RAM kit. Since you can't find a supported RAM list how are we supposed to know which RAM modules are compatible? And I think this is mainly a BIOS issue, which on top of that it is completely locked and you can't change the timings for example to mitigate these problems.