DISCLAIMER: PLEASE, HP reps, READ THIS POST IN IT'S ENTIRETY, AND PAY CLOSE ATTENTION, BEFORE REPLYING, OR SENDING ME A PM. THANK YOU. 😊

Hello again community, you might recognize me from the last time I made posts here, about my last OMEN 17t-an100 CTO having overheating issues, and much more. Since then I was supplied with a replacement machine, and it was working well for a couple of months after that, but now things are taking a terrible turn, once again....

I have been experiencing overheating with this machine once again, but this time It's a bit different. Core 2 (of 5, from Core 0-5) seems to be overheating quite a bit more that the other 5 cores... In fact, so much as a -14°C difference between Core 1, and Core 2. I have been doing research, and found this phenomenon has a specific name, "CPU Core Deviation". According to Intel's datasheet, for the 8th and 9th generation Core processors:  (https://www.intel.com/content/www/us/en/products/docs/processors/core/8th-gen-core-family-datasheet-... - See page 95, section 5.1.5.2.1 - Digital Thermal Sensor Accuracy) there should only be a maximum of a 10°C difference between the highest and lowest temperature, due to an allowed range of ±5°C within the entire operating range.

As seen below, my CPU bypasses that range, under an even CPU load, across all 6 cores. (Cores 0 through 5) click to expand.

This just doesn't occur on Windows either, the same thing occurs to Core 2 in Linux, under the same equal load, and same ambient conditions. 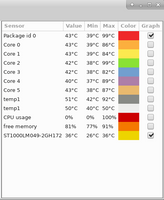 See Core 2's Maximum temperature, and the differences between 2's and the others. at least 4 other cores are greater than 10°C less than Core 2 when in a steady, equal load.

As for the Coil whine, I have separate videos, of it happening very VERY loudly. One is a steady rhythm, where the other is a descending speed whine. {Rhythmic coil wine, video} and {Descending speed coil whine, heard twice}. The coil whine comes and goes, however when It does come around again, it's very very loud! The laptop will also begin to act sluggish, or a bit erratic after a while of hearing it, then it will randomly go away again.

As for the overheating, I can sit at and/or around 100°C playing many (but not all) of my games, even on lower graphics settings. (GTA V, GTA IV, BeamNG, Forza Horizon 3, Automation, just to name a few that cause the overheating.) I have undervolted, and can to -0.115 V, however it's not doing as good as it could.

Upon opening the rear of the laptop, thinking that maybe it was a bit dusty, ended up not finding dust, however I did find that there was an ungodly amount of thermal past oozing out from around a heatsink, however I've been informed that it won't hurt anything. Also some plastic around one of the fans seems to have an imprint of the vent from the case on it, so I believe it got a bit too hot and melted it a bit. Also, the rear vents (that are made from very very very thin metal) have warped a bit. There was also the wiring clip for the speakers (not pictured, but can provide a picture) that's bent due to the wiring being too short, or plugged in improperly, causing the speakers to occasionally malfunction. The wiring clip could not be fully inserted, and I didn't want to force it, so it remains just as I found it. 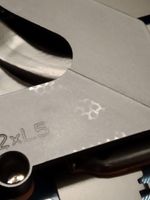 not dust, as running my finger over top of this doesn't remove it, and it feels a bit bumpy. Also, notice the "L5" is a bit less embossed than the "2x" is.... possibly also due to the heating. 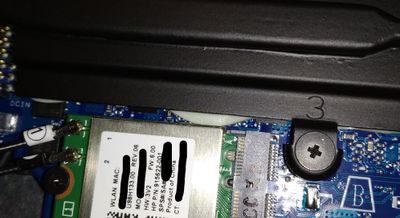 warped air vent, possibly due to the extreme heat. (yes, it seems the rear vents are so small that if the laptop is hot enough, it starts getting abnormally/unsafely hot on the underside, in the middle, and over the vents.)

Now, here's the important bits. Everything is up to date, BIOS, drivers, everything! I would've called the OMEN team already and had this machine sent back for repairs, however I haven't anywhere to back up my over 500GB of important data, nor do I have the means to obtain a backup medium right now. What should I do? All my important data is on the HDD, and the OS is on the M.2 NVMe SSD, should I just remove my HDD and send the laptop back without it's HDD? Is there a way I can request HP send me a backup storage medium?

BONUS QUESTION: Does the date stamp marking(s) inside the chassis mean anything? Quite a few months seem to be marked, and I'm not sure what it could mean. 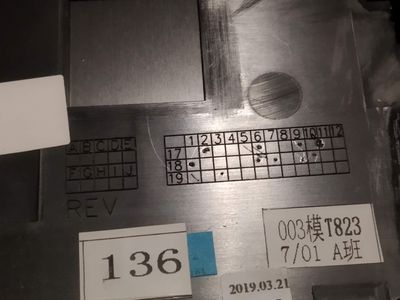 Based on your comments we are escalating again for you

Laptop has been sent back on the 14th of December, HP received it on the 16th, and now we wait.

This thread is to remain open until fully and entirely resolved.