All games crashing and freezing

Every time I start up a game on my laptop, the game either freezes, crashes, or both. It doesn't matter what game it is. It usually successfully boots the menu, but once it finishes loading the actual game (the part I can control and play), it freezes and then usually crashes, or else is just stuck frozen. I also have a static effect on some games / launchers, like the EA Origin launcher and the Blizzard Launcher, as well as Overwatch. There are weird static-like white squares and triangles that appear overlaying those applications.

I've tried a number of things to try and fix this, including restoring back to before I had the issue, updating drivers and Windows 10, restarting numerous times, and uninstalling / reinstalling the programs, but nothing works and I'm at a loss as to what to do, short of a full factory reset (which I'm not even sure would fix the problem).

@FoxCom , welcome to the forum.

I want to make certain that these problems are only happening when you are trying to play games.  Is this correct or do you have this problem with other apps?  If the problem only exists when you play games, it is most likely a software problem.

This only started yesterday so I haven't tested many programs, but yes, it only seems to happen with games. Web browsers and office software all operate just fine (except for the game launchers I mentioned, Origin and Blizzard, which have the static effect, but it doesn't seem to affect their functionality).

Thank you for the additional information, @FoxCom!

I haven't had this problem, myself.  However, I have had problems with the games themselves not running correctly without updating them with current patches.  I suggest that you go to Origin and Blizzard's Support pages to see if others are having the same problems.  I believe the problems are being caused by something your computer doesn't like on their sites.  I use Steam and have never had any problems with them.

Thanks for the suggestion geekster. Normally I would agree that there was an update I hadn't downloaded or some setting within the game that was causing this, but it isn't one or two games, it's every single one. I've tried Dark Souls III (which I did try reinstalling), an RTS called Supreme Commander, Bloons TD 6, Overwatch, Getting Over it with Bennet Foddy, League of Legends, and none of them work. All of them freeze and then crash. Even my Oculus Rift S is showing only black screen and freezing my computer. There isn't a single game that I can successfully launch and play at the moment.

@FoxCom, I suggest that you go one step further and try some of your apps to see if you are having any problems with them.  If you are having problems other than with games, it may be a power adapter of other component problem.  Otherwise, I believe it could be something to do with the connection to the sites.

Okay I did a bit of testing, and on a hunch I tried to run Photoshop and create a 3D layer, which immediately caused a crash. So it seems like whenever I try to run anything involving 3D models, the program will crash. Is that useful info?

I would appreciate hearing what happens with the diagnostics.

These were the result of the Fast Test. I can do the Extensive Test if need be. 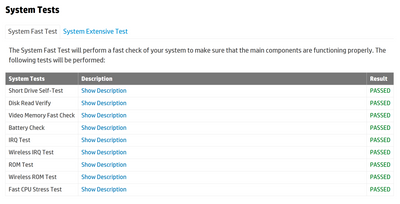 I also ran the Extensive Test and all the sections passed.