After I agreed, the bios update started, all passed fine, but after reboot my screen started to be just black like its not turned on at all.

I tried to recover bios with WIN + B, during that process my screen started blinking with some graphical artefacts, but that didn't help, windows continued to start successfully (considering startup sound) without any signal on the screen.
Just to try I removed 1 RAM stick, and it started to work, no matter which one is installed or in which order, this F.16 bios just doesn't work when 2 RAM sticks x 32GB are installed. Now I have issue that after manual update to F.13 bios windows installs F.16 again after reboot. And I can't delete that update, it sits in driver updates history.
Interesting thing is I can't find that bios on official site, there is F.13 as latest one. Can somebody clarify the situation?

Can somebody clarify the situation?
Should this bios be available for HP Omen 15 en0023dx?
What is the issue  with 64RAM?
How to delete this update from the windows and stop it from updating to F.16 again.? 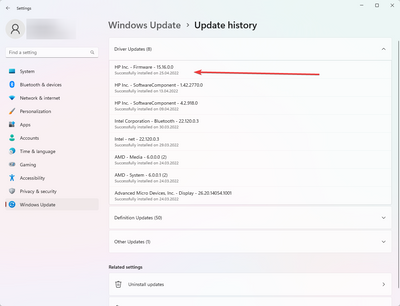 That is weird to be honest. I would take it in to a tech for sure because it will be unclear unless someone tries to look at it. Have you tried to reinstall windows if possible, or taking out the battery of the labtop and putting it back in? I just literally  updated right before I am replying to the post to  my Omen 15 labtop 4800h w/ 1660ti 16gb ram to f.16  and it updated perfectly fine. I was on F13 before this and I saw an optional update and I was surprised it was about to update bios for me when it restarted. But mines went smooth upgrading to F.16 no issues. I feel like my labtop runs a bit smoother now.

No, it has nothing to do with Windows.
With F.16 Bios and 64GB RAM it turns off the display completely, so it doesn't show ANY picture, even Omen label before Windows starts loading.

My suspicion is it has some issue with integrated video if 64 RAM are used.

I understand that it works for you, but as I described in first post I have problems ONLY when 2x sticks by 32GB are installed, when I pull out 1x 32GB stick and leave one installed screen starts to work on F.16 bios, and goes back to completely black if I install second 32 GB stick back and get 64GB together (2 slots occupied).
It would be nice if you could to test the same RAM setup with 2x 32GB sticks.

I understand that your HP notebook is not working correctly after the BIOS update. I appreciate your efforts to try and resolve the issue.

To get the answer to these questions, you won't be able to delete the updates, BIOS availability depends on many conditions such as system configuration, Windows version etc.
As you've mentioned the computer was working fine before the BIOS update. The last thing I can suggest try and restore the OS back to the factory default to correct this issue. The HP Cloud Recovery Tool allows you to download recovery software to a USB drive. You can use the downloaded recovery image file in order to install the Windows operating system.

As I already mentioned, pulling out 1 stick of RAM helped me to make screen working with F.16 bios.
So I downloaded F.13 bios and flashed it, then put second stick back.
So now my laptop continues to work on F.13 bios.
So the main questions for me: what is the difference between F.16 and F.13 bios, maybe you have any release notes?
Also I don't understand why it stops working when 2x 32GB RAM sticks are installed, when F.13 works fine.

To get the answer to this question, F.16 provides an update to the system BIOS and fixes the bugs in Windows 11.
As we have tried all the troubleshooting steps from our end, think this issue needs some additional technical assistance that can be better provided through one-on-one interaction with our HP Support team.

I'm sending out a private message to assist you with the next course of action. Please check your Private message icon on the upper right corner of your HP Community profile Next, to your profile Name, you should see a little blue envelope, please click on it or simply click on this link: https://h30434.www3.hp.com/t5/notes/privatenotespage

Hope this helps! Keep me posted for further assistance.
Please click “Accept as Solution” if you feel my post solved your issue, it will help others find the solution. Click the “Kudos, Thumbs Up" on the bottom right to say “Thanks” for helping!

F.16 mainly focuses on fTPM shuttering issue so any previous TPM values might cause black screen.

Go to BIOS, Security, under TPM option, you will see Clear TPM, set it as "YES", it should work for you...

Before doing so, make sure you take backup of the files in bitLocker or any other security tool which uses TPM key. As setting it to yes will clear the previous key and generate a new one.

I hope this will work for you, thank you!

I just had the same issue, what a frustrating experience!  Not cool, HP!  As with the OP, I found the F.13 BIOS available for download, which resolved the problem (note the downgrade process shows garbage on the laptop screen while running), but as soon as I booted back to Windows 10, the bad firmware was queued to be applied again.

Unfortunately the above Roll Back option only works on Windows 10, updated to Windows 11 and I no longer have a Roll Back option, Disabling the device doesn't seem to work.  HP, please retract this broken BIOS!!!

Clearing the TPM does not help.