Just wondering if anybody else has had issue with updating bios to the F.02 ?

Updated and cooling fans would not speed up, Omen command centre would not control them either.

Tried benchmark and temps would hit 99 degrees Celsius and fans would not ramp up.

I have the exact same issue as you. You stated that performing a bios recovery to BIOS: F.01-04/22/2020 fixed the issue? I am not a tech savvy person and do not know how to do that and was wondering if you could explain or give me a link on how to do that. Sorry if this isn't the right place to ask. Any help would be appreciated.

edit: nevermind after some more googling I found out how to do it

After I updated to F.02 my fans go full speed from power on for about a good 20 mins before they calm down and act like normal, I tried the rollback but doesn't seem to be working.

i just used this link

then put in your devices serial number (to get this open command promt and type "wmic bios get serialnumber", that should give you your serial number). it should direct you to a new page with a bunch of drivers. click + on the one that says bios. next to the name of the bios update thing (to the left of the name) there should be a small blue triangle, click that and it should expand the bios update to show you a description. at the bottom left of that there should be a previous versions button. click that. then just download F.01 and follow install instructions. if you have anymore questions feel free to ask

I have a brand new Omen 15 Ryzen with the same issues. After much experimentation I've found the following solved this for me (with one caveat)...

Temp is now hovering 40-41oC in idle (previous it was 55-60 with constant fan spikes), however the fan is still always on which is annoying (albeit low, just constantly pushing air and making a soft whoosing sound) - that's even with the bios "always on" fan control option set to off.

I believe there's a software issue somewhere but it's hard for me to test this, I will try booting into safemode to see if I have the same issues and will report back.

Shame, as otherwise it's a great laptop, but the constant fan noise is very annoying and was never an issue on my HP Powerbook with i7 and GTX1060

I think they have removed the updated bios, at least for my     HP Omen 15-ek0003na the bios is version

Undervolting is locked out, and when I received this laptop I was a bit disappointed as the cpu ran very hot and the fans would go to max even when running low demand games

I am posting this to help others as I have been able to significantly reduce temps for cpu and gpu and so be able to game demanding games with fans lower on auto. Omen command centre is set at performance & fans on auto

GPU: I used msi afterburner to pin the gpu voltage at 0.7, and left all other gpu settings stock

The default values are 60.5Watts and 107watts, edit - 45watts I think, and the cpu was thermal limiting in a couple of cores

I followed this video:  https://youtu.be/0DNYGXrclAM 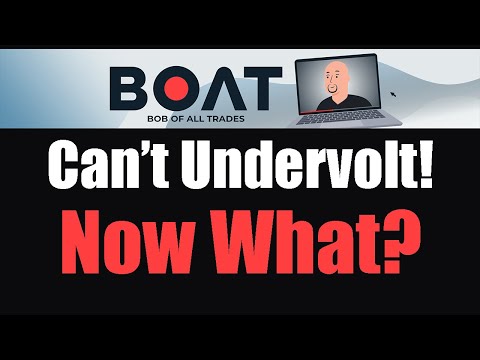 Can't Undervolt? Do This!
youtu.be/0DNYGXrclAM
Try these two solutions to improve CPU thermal performance!Things that go without saying...-Thermal Paste replacement might be necessary option-Decreasing yo...
0 Kudos