SteamVR Performance Test now fails after succeeding first day, but not the next day and thereafter

Tried again in a couple of hours (no changes in the interim) and  Performance Test passed.  Played for a few hours, and after initial stuttering due to low frame rate eventually settled to work pretty darn well.

Next day couldn't start up SteamVR so I ran the Performance Test again and it failed, and it continues to fail.  Instead of Performance Test taking 'several minutes', cycle to failure takes about 45 minutes.

Machine runs hot, being a gaming machine, so I am very mindful of ventilation.

Bottom line - total waste of money unless this issue is resolved.  I am quite long in the tooth, experience with computers dates back to the late 70's,  (My age is in the low 70's - lol).

I suspect there is and issue with the GPU driver -  but there appears to be no way to update this - can't use the NVIDA driver library even when picking the right make and model, and HP support center says everything is up to date. No way to force an update.  The screenshot below is the result of the SteamVR Performance Test.  Note the GPU reference - Microsoft Basic Display Driver.  That can't be right!  I wonder if the wrong GPU driver is overburdening the CPU. Note that I did not change the graphics driver, have no idea how that could have happened. 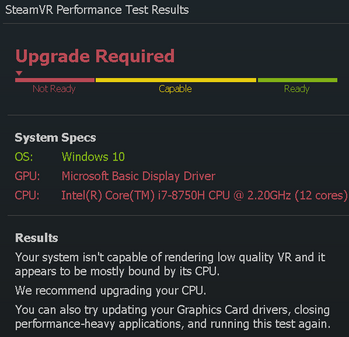