So Im not sure whats going on here but ive had my laptop for a while now and i decided to update the bios, First it was to F.12 for OMEN by HP 15-dc0010nr but i was having problems with thermal zone and it 'overheating' when it actually really was not, so the latest bios came out im guessing which is F.14 rev a which wasnt that long ago but im still getting Thermal Event shutdowns.

The embedded controller (EC) did not respond within the specified timeout period. This may indicate that there is an error in the EC hardware or firmware or that the BIOS is accessing the EC incorrectly. You should check with your computer manufacturer for an upgraded BIOS. In some situations, this error may cause the computer to function incorrectly.

this happens before and after the thermal events from what im seeing, And just for those of you thats going to ASK, no im not overheating my proccessor is at 145f - 165f at best during usage because i have a Corsair Water cooler attached to the heat pipes ( it brings it down by ATLEAST 20 degree's when underload) so heat is not the issue As even when idle at 120-130f ( Not celcius folks) ive seen it shut down via locking and going in to hibernate.

This has never happend before i updated the bios to F.12 which i had problems and updated to F.14 rev.A which im still having problems, maybe if i can find a older bios then F.12 for the INTEL procs? all the overheat issues im seeing is for the AMD version of these omen laptops.

ive tried multiple things like Throttle Stop and undervolting, intel Extreme tuning and lowering the Turbo boost to10 from 35.

Tried Notebook Fan controll and have set the fans to 100% at all times, so im not sure whats going on with the laptop now, though i do see concern of the EC not responding.

So any other intel omen users having these issue with the laptop shutting down due to the controller bugging out?

install speedfan application and check rpm of both fans ,post it here and the  i will see if i can help you.

I go the exact same problem as you, my OMEN HP starting crashing due to heating when the temperature is exactly the same when I was using it a year ago. It crashes whenever I run high performance games like MW or The Division 2. I ran these games before with not a single problem and now it started crashing on me due to a malfunction

bro am working on it for weeks please send me the photo of speedfan application running on your laptop.it will benificial for both of us .we will work together on it .

Here is a screenchot of my speedfan application. 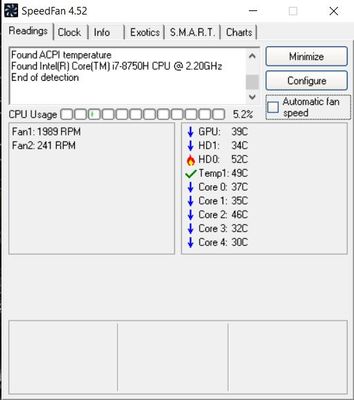 what part of speed fan are you looking for specifically?