It has been a while since anyone has replied. Simply ask a new question if you would like to start the discussion again.
Femmelotje
New member
1 0 0 0
Message 1 of 5
22,700
Flag Post

I have a recurring problem with my officejet 4650.
Everytime I try to print something, windows tells me it's offline. When I check the printer, it always notifies me that it has a stable connection with my wifi. It's IP adress hasn't changed since I got it.
I have tried re-installing the drivers, I have used the HP print & Scan doctor, but nothing seems to work. And weirdly enough, every once in a while, the printer randomly starts printing documents I have tried to print weeks before, without me doing anything about it.

While DHCP is convenient, devices such as printers (wired and wireless) should always be assigned a static (fixed) IP address manually to avoid conflicts on your wireless network and MUST be outside the DHCP address range of the router. This is because printers are the only external devices that do not have the ability to automatically interrupt the router for a new DHCP address once the least time expires.

1. Set a static IP in the printer outside the DHCP range of the router (check your manual).  This Static IP is important as DHCP IP addresses will change upon different power up sequences of your devices.  You always want your printer to come up with the same IP address all the time.  See how to do this here:

2. Verify in the printer that 'Auto Off/Sleep/Energy Saving Mode' is disabled and/or the System Mode Time Out is set to zero (0) if your printer supports this.  Use the Embedded Web Server (EWS) by going to the printers IP address in your browsers address bar, click Settings Tab/Auto Off, or use the Printer Assistant, Printer Home Page (EWS). Also check your Printer Properties. This feature is automatically disabled when the printer is connected to a computer or mobile device, a network, or a fax line (if supported).  You also may not find this setting.

4. Make sure printer is plugged directly into a wall outlet and not into a UPS, power strip or surge protector. This may cause the printer to intermittently drop offline and disconnect. 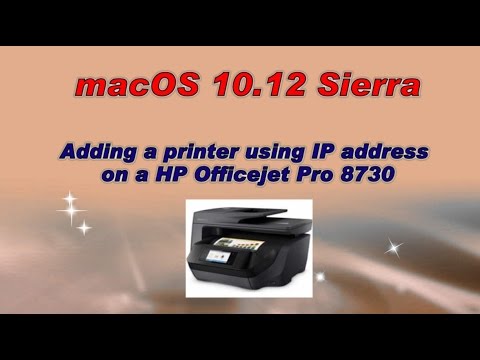 HP Officejet Pro 8730 : Adding a printer using IP address on macOS 10 12 Sierra
youtube.com/watch?v=A5tNFjEBDOw
Click on the link to subscribe and get the latest video uploads: https://goo.gl/y4Rcn1 This tutorial shows how to add a printer using the IP address for macOS 10.12 Sierra. The added printer is sometimes more stable and also helps to resolve some print and scan issues such printer offline. HP ... 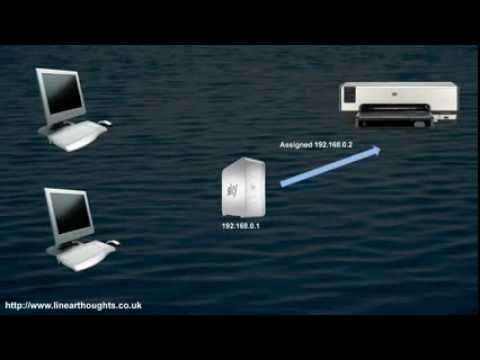 How to Fix Printer Offline Problems - Setting up a Static IP address
youtube.com/watch?v=ZEqvUKxWmq4
Printer offline issues can happen because the IP address of the printer keeps changing. This video explains how that can happen and what to do to fix it. For more tech tips, check out http://www.linearthoughts.co.uk .
0 Kudos
Tags (2)
View All (2)
momentum79
New member
1 1 0 0
Message 3 of 5
2,424
Flag Post

This is nuts for the average user.  You're telling me that I have to go and research all this stuff and figure out how to do all this techy stuff.  I don't have time for that.

Use HP Print and Scan Doctor to check connectivity

Even though I am probably not an average user because i fix these things all the time, I felt the same way - the instructions seemed overly complicated to switch to a static IP.  I really don't see why a static IP would be necessary - especially if it never changes but I though, ok, let's go with that as a possible solution.

Rather than following these directions, I went to the 4650 screen and pressed the icon for wireless connection. then the icon for settings, then scollled down to advanced settings. and selected that. then selected IP Settings and changed it to Manual.

It then had a new static IP and reconnected to my wireless network.

My computer still showed it as offline. so I simply went to Settings in Windows10 and Added a printer and it searched the network, found the printer and added it. (as a side note, I then removed the old one which seemed to remove the one I just added as well so I added it again but that's a different problem, I guess)

I don't know if what fixed this was changing to the static IP or re-adding the printer but at least it is working again.

Hope that helps. It was certainly more simple than the steps above.