In my previous post, I mentioned that I would escalate this issue to the respective team and I'd like some additional details to do that.

I have sent you a private message with the required details. Kindly check the same and respond.

In my previous post, I mentioned that I would escalate this issue to the respective team and I'd like some additional details to do that.

I have sent you a private message with the required details. Kindly check the same and respond.

Haven't noticed you I had already replied to it?

No, I have not received any message from you. Kindly resend it for further assistance.

, I have not received any message from you. Kindly resend it for further assistance.

Is there another method to reply to a private message?

Here's a (anonymised) screen shot of my inbox: 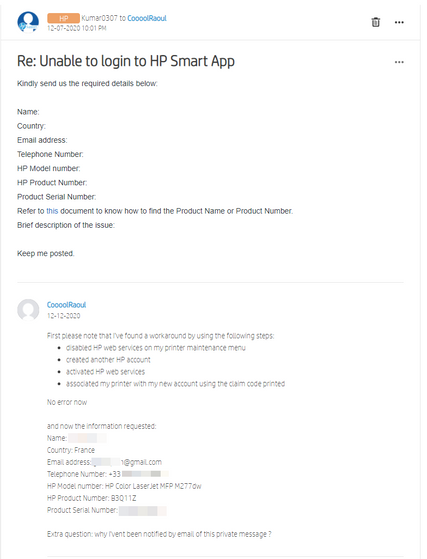 BTW it looks that PM received email nofications are no working.

Maybe the problem is on your side?

Unable to sign in to HP Smart Ap on my Win 10 computer. I have HP Pro 6400. It appears this has been going on for a couple of months? I can print because the printer is on my network but I can not scan.

It's likely the same server issues HP lied about last time that rendered the app useless. It took a couple weeks until I could finally login via the app, but the app is relatively useless except for when required to setup a new printer.

For instance, our two printers were enrolled in Instant Ink at the end of November, and just discovered an hour ago that one printer is very close to its printing allowance for the month. Which I only discovered due to an email informing me we're within 8 pages of our limit. Then I visited the Instant Ink website, where the numbers were completely different.

Seems we were within 9 pages last month, but no email was received then. Makes me wonder **bleep** is being tracked with their so-called Smart app because  I know it sure as hell isn't "monitoring" my Instant Ink. Unless HP simply thinks ink supply status notifications just makes too much sense. Then again, it is HP who gets paid when more pages have been printed than subscribed to.

It's bad enough their  printers are practically disposable, But combined with their incompetent excuse for support, useless apps and sketchy AF services (Instant Ink) I am done. First thing next week I'll be calling to see if I can [hopefully] still return the new HP printer that brought me here in the first place. The only thing worse than all of this is the painfully obvious fact that this company has absolutely no pride whatsoever in the products bearing the HP name.

Best of luck to all who decide to stick around for this **bleep** show, but I for one am taking my loyalty and money elsewhere!

I reinstalled and restarted 3 time. I removed the printer from Windows and put it back. I have 3 computers but only 1 is having this problem which is just stupid. Wondering what brand of printer to buy next because they are disposable.

Tried that - guess what - still not working.

you have to sign in with your user name(not email address). it worked for me, I had been trying to log in using my email as user name, didn't work. after I read in one of the soulation comments here, someone mentioned. so I used my user name and password BENGO. I did it and faxed my docs. good luck all hope it work for all of ya...