Recently I have been allowing my laptop PC to sit idle during the day, as I use it on and off, and wish to not turn the entire machine off and back on again repeatedly. Whenever I lock Windows (WIN + L) I notice the fans increase speed for about 20 to 30 minutes, then resume idling. Then I began to notice even when the machine was in use, that the machine would slow down a bit (especially read and writing to the SSD). Checking the Task Manager I noticed that HP Hardware Diagnostics was running, and was using up about 500MB/s on the SSD of I/O activity for well over 20 minutes, along with about 200MB/s on the HDD... Upon opening the program in which I have never once used, I found a slew of logs, from where it seems to run a Drive Short Self Test again and again on it's own. All test pass, but I'm worried this will wear the SSD and my HDD out as it seems to test them both, very compulsively. It seems to run each and every hour, unless I intervene and force the task to end in Task Manager, however after another hour, the program will reopen itself in the background thus forcing me to have to close it again and again.. Opening the program during it's autonomous tests yields no visual progress of any test, however the test still runs in the background. See screenshot below. 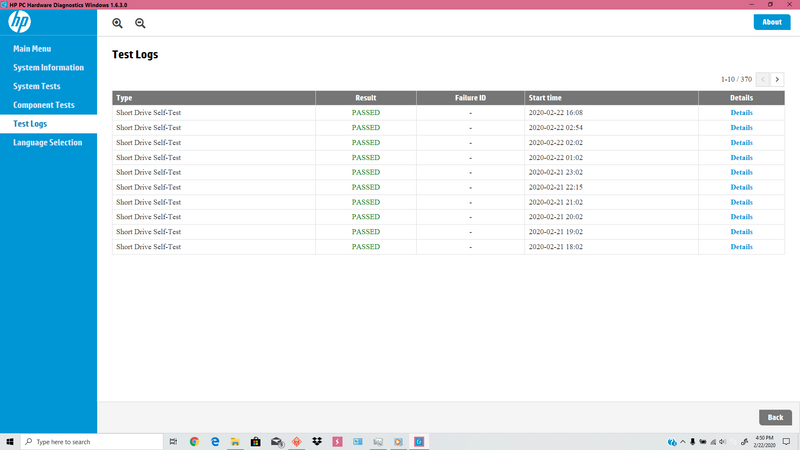 There is no task scheduled for this program, or any other similar programs in the Windows Task Scheduler. I am worried this is going to shorten the lifespan of my SSD and HDD, as this doesn't just do a weekly test, but an hourly test, each lasting about 20-30 minutes to complete. Is there any reason for this? Even with "Allow this app to run in the background" disabled for HP Hardware Diagnostics, it still runs on it's own. All the tests pass, why does it need to keep retesting it?

I reviewed your post and I understand that the hardware diagnostic tool is running automatically in the background.

I recommend you uninstall the hardware diagnostic tool from your computer and then download and install it from the below link and check.

I have re-installed the Hardware Diagnostics app after completely uninstalling it and re-booting my PC. Unfortunately it still is persistent in running tests, and there is no way to stop it from occurring. Due to this program significantly slowing my device down, and shortening it's lifespan with these constant tests to both the SSD and my HDD, I will just be uninstalling this program from my computer completely, as it is causing more harm than good (performance and lifespan wise). 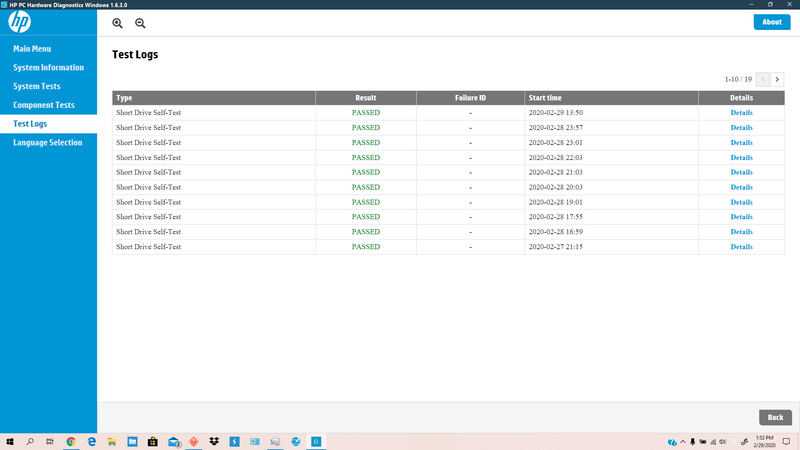 EDIT: In the System Information of HP Hardware Diagnostic for Windows, it shows my SSD doesn't support Drive Self-Tests, yet somehow it still runs a test on it repeatedly.

"SAMSUNG MZVLB1T0HBLR" is the SSD, showing it passed the Short Drive Self-Test that it doesn't support.

Yes, I recommend you install the software completely and check.

Let know how it goes.

Yes, I have followed your instructions, and the issues has not at all been fixed... The hourly tests still run. Due to this, I will be removing/uninstalling this program from my computer as it is serving no use to me, other than slowing it down.

Can I ask if you have HP Support Assistant (HPSA) on your PC? It sounds like you have HPSA setup to run auto scans on your system and it is checking your drive during certain hours. I believe you can tun this feature off. Also, you can check the wear level of your drive if it is a SSD drive. You can go into HP PC Hardware Diagnostics Windows and look under System Information, under storage and see the drive wear level. See screen capture below. This will help you check the wear level.

@RossHWD , I do have HP Support Assistant (HPSA) installed onto my machine. there is no settings to disallow it from running a storage test hourly. There is no way to schedule that to be ran either.

My machine doesn't have drive wear statistics within HP Hardware diagnostics (as your screenshot shows). See my screenshot below. 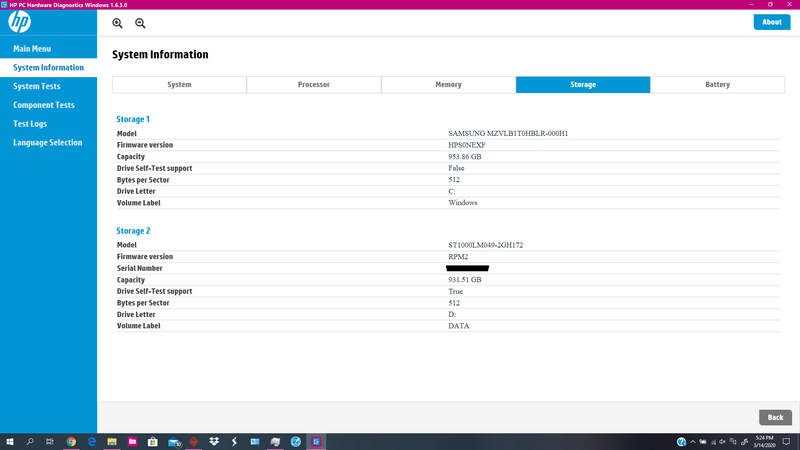 I have been having the same problem, and posted the question in a different HP forum -- with no results. Were you ever able to resolve this? Did you ever figure out what was starting it, or how to stop it? I think it started doing it with a recent 2020 patch to the program.

Hi sorry for the late reply, but I was trying the figure out a way for you to turn off the feature in HPSA. Within HPSA, you should have been asked if you want to have a system check and for said period of time. I'm not running HPSA on my system, but you should be able to

Double-click the HP Support Assistant on your desktop to launch the program, then click "Settings" in the bottom left corner of the window.

Click the "Health Analysis" tab. Click the "Frequency" drop-down menu and select" how often or if you want to run checks.