turn on suggested results
Auto-suggest helps you quickly narrow down your search results by suggesting possible matches as you type.
Showing results for
Search instead for
Did you mean:
Options
help2018
New member
1 0 0 0
Message 1 of 3
2,354
Flag Post

Just a heads up, I am not very tech-savvy whats so ever, so help me out here...

I am currently working in a small building that has different compaines in the same building. While we each have our own office, we are all on the same wifi network. One of the employees for another company, continuiously uses my printer and scanner for his job (after I have asked him to stop) so I need to unfortunatly take matters into my own hands. I am not a selfish person, but he has his own printer he just doesn't want to use his ink, which I think is wrong. I have an HP Laptop, and an HP Printer that I use wirelessly, and I am running Windows 10.

As I said, we are all on the same network, so I can't block him from that. I have tried researching this before comming here and I found a similar thread leading to me try this:

and then from there I have tried numerous "deny" actions but when I select "Deny Everybody from Printing" it messes up the printer on my own computer and I can't print anything because it says something like "driver not installed". When this happens, I uninstall the printer and reinstall it, and everything works great until I try to deny access to my printer again.

So what I am asking is, is there anyway to deny other computers access to my printer? I want my computer to be the only computer connected to my printer/scanner. From my research I have learned that there's no way to put a password on it other than downloading third party software, which I don't want to do. Am I just denying access to the wrong people? If so which option should I be choosing? If I opt to use my printer not wirelessly (although not ideal) would that solve the issue? Any other suggestions are welcome.

Two things you can do.

Conncect via USB cable or... create your own private LAN.

So, I had to do this for a client that does not have a server and the machines are workgroup.

I tried making a firewall rule on the Meraki, but the easiest way was built into the printer itself.  It has its own firewall that can be set to allow connections from 1 specific IP Address for the End User and one for the Admin. 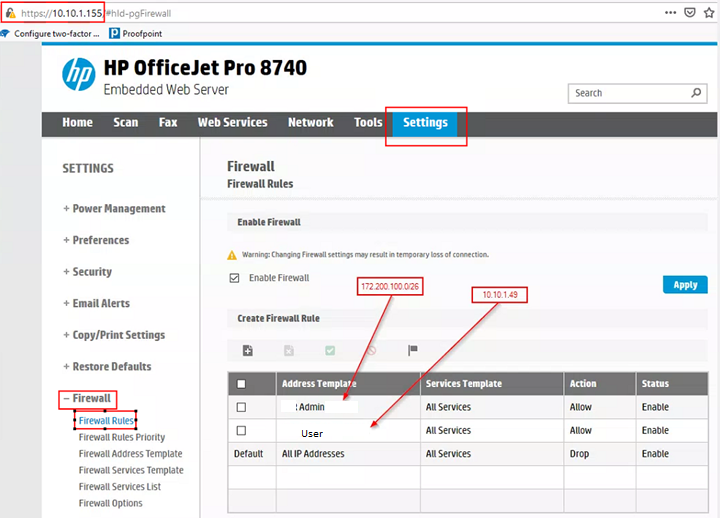