This was a horror show, but just got it working and wanted to share it with anyone who's still getting this issue.

We changed from using WSD to using IP instead, and that meant it could detect the duplex unit.

OMG OMG OMG! When this solution first came in, I totally ignored it. By that point, my printer was totally unusable on my primary machine--all the fudging around had corrupted something to the point that an error popped up each time I even tried to print. I had to use my wife's computer to print anything, and hers (of course) worked perfectly. It was starting to get painful because I print 4-5 times a week and her setup is cramped and gross and... You get the picture.

But seriously, I ignored this when it came through because it just seemed too obvious. But when I saw a couple of "worked for me" posts, I gave it a shot. I first had to do the "wipe your system clean" of any evidence the printer was ever installed. That was a pain in the patootie because a directory that was needed for a full uninstall had permissions set to "you need to be Jebus herself to remove these folders". Anyway, after I got it done, I tried following Destiny2020's instructions on a blank slate--it wouldn't work exactly as she laid it out when I tried it before the printer was installed at all.

So I installed the printer as I would if I was just taking it out of the box. Predictably--it didn't work. I mean at ALL. It wouldn't print anything. It was a brand new error this time--one that showed up in the notification panel unlike the previous one which was an old school red X little pop-up.

But after the printer was installed, I followed Destiny2020's instructions. This time, with a printer installed, they worked EXACTLY as described. I, too, left the "old" printer icon installed under Devices and printer, but set the "new" one to default.

And I'll be a monkey's uncle if it didn't work. Perfectly. Not only am I able to print again, but I can Duplex / double sided print without having to manually reload paper! I'm so happy! Thank you, Destiny2020!

Glad it worked out for you too! Cheers! 😊

@destiny You amazing wonderful person THANK YOU! This worked! I'll just keep doing this (if the problem repeats itself again). Fingers crossed this is the end of our troubles.

Here is what worked for me:

I followed through until the install completed. Once it was done there was a new icon for 'HP ENVY 4520 series' under printers. There was still an icon for the other driver with all the glitches, but, to avoid anything else funky happening, I left it alone. The new driver has no issues printing double sided and in color in any program. I'm not sure that this will work for everyone, and I could not tell you why it worked for me. Good luck to everyone with this craziness. HP support needs to do more digging and find the root cause of these issues.

Every time I get a reply from someone repeating that Destiny2020's solution worked for THEM, too, I get an e-mail. That e-mail encourages me to choose Destiny2020's response by "accepting this solution". But it seems I can't "accept" it because a different "solution" was already accepted. Unfortunately, THAT "accepted solution" hasn't helped near as many people who were having our problem. Seems that one or two people just had a faulty setting--Most others had a genuine issue.

Anyway... I'll shout to the HP Gods: Remove the Accepted Solution from this post and replace it with the one that has actually helped a bunch of people. If this many people have announced in the forum that it helped, imagine how many it helped but didn't bother posting about it.

I made a video tutorial .... if somebody needs more details. 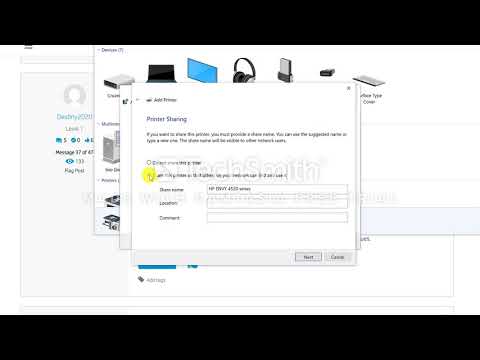 Thank you so much, I fumbled with this issue for a long time, you work around did the trick!