The solution to install the printer using the IP address did NOT work for me.  When I right-click a .jpg file and select "Print" from the pop-up menu, the preview is monochrome.  However, when I printed the printer test page after re-installing the printer, the little printer graphic and the title "Windows Printer Test Page" appeared in blue, so I assume there is nothing wrong with the hardware / firmware of the printer itself.  (The printer's information window tells me that the firmware is up to date).  I downloaded and installed the HP Print Doctor.  When I ran the Print Doctor,  I received a message that "some issues have been fixed," or similar language.  I printed the test page from within the Print Doctor, and the printer produced a test page with cyan, magenta, yellow, and grayscale test bars.  But even after this, the preview window of any print operation I try  continues to show a monochrome image, and the printer properties dialog box does NOT contain an option to print in color or grayscale.   Something has changed in the recent past, because I used to be able to print pictures in color with this printer.  I am throwing in the towel on this one, and I intend to buy a new all-in-one printer.    And it will NOT be an HP!

I have had that same print problem happen to me several times over the years-that last time it happened the IP address solved it. Now a similar problem is occurring where the print manager does not allow you to select print or scan! I have gotten around this by printing or scanning directly from the printer it is obvious from the amount of people complaining of this same problem over the years that the problem lies in the code of the printer software on the computer. I am very surprised that HP cannot figure this problem out. And the response time to this problem has been so many years. I have used HP printers for years and am satisfied by the print quality of the printer but the software is never fixed- On my computer I have had the problem of the COLOR print choice not available-and after a few months I am back to the same problem and searching for fixes as each time it is "fixed" it reoccurs again. Now when I try to delete and reinstall the program I get a "Cannot access the removal of driver because you are not as administrator" even when I use my administrator account-so what is up with that? 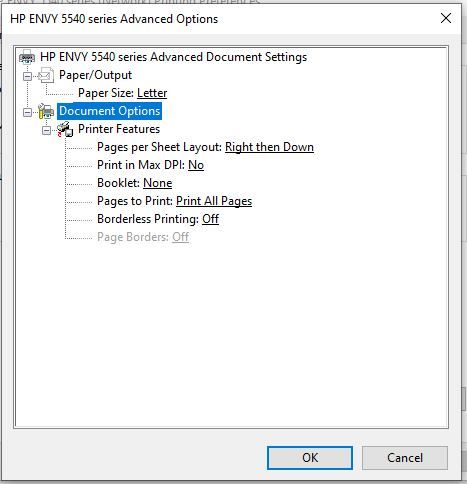 This is what I see in Advanced Printer Properties.  Print in grayscale is missing.

This worked for me!  Thank you!

Do you mean installing the printer with its IP?  Or something else?

HP has long known about this problem and cannot quite figure out what to do about it, hence all the various fixes-I am dissappointed by HP not fixing this problem and offering lame fixes that anyone with experience can easily see they were meant for computer novices-good luck-but the IP address did fix the problem until a later "upgrade" by HP un-did it all!

PS-get the IP address from the printer!

Thanks for the note!

You know what has been said of insanity...trying the same thing again, but expecting a different result?  Well, since there seemed to be no rational solutions coming from HP, I decided to try again installing the printer via its IP.  But this time, I received a dialog box that a driver was already installed for this printer, would I like to use it or would I like to look for another driver?  I thought, well, the driver I had was supposedly up-to-date, so I chose to use the installed driver.  No luck...would not print in color.  $%*#~@~!!   Then I removed the printer, re-installed it via IP, and this time chose the option to look for another driver.  And this time, the option to choose color or grayscale appeared on my printer properties for printing!  And I could indeed print in color.  Wanting to see if this was a fluke, I re-started the computer, and I could indeed still print in color.  (Caveat:  I tried it printing from Word, from Microsoft Edge, and the photo editor...all of them worked).

This experience was insane.  I do not know why the printer worked properly until a few months ago.  I suspect some sort of problem caused by a Windows update, but that's just a hunch.  Neither the printer driver nor the printer firmware had been recently updated AFAIK.  But the seeming indifference on the part of HP tells me that my next printer, whenever I should need to get one, will not be an HP.

After a Win 10 update, my HP Envy 5540 All-In-One Color printer was no longer printing in color.

I tried everything, but after I pieced recommendations from several sources, including customers and moderators, I finally figured it out.

Select Let me pick from a list of available drivers on my computer.

I now get the option to print in black & white, or in color when clicking on Printer Properties.

I am having the same issues. I have tried everything including trying to remove the Drive Package but I get this error message: (BTW There is no print in the queue. The printer is on. I did try to shut it off and unplug it,  but that did not resolve the issue.)

The following package(s) can not be deleted:

The following driver(s) can not be deleted: