It has been a while since anyone has replied. Simply ask a new question if you would like to start the discussion again.
Heika100
New member
1 0 0 0
Message 1 of 4
723
Flag Post

Welcome to HP forums, I see that you are getting horizontal lines while printing.

I am eager to assist you.

Which operating system is installed on the computer to which this printer is connected?

Which application are you using to print?

Did you try to print from a different application and check if that prints fine?

Figure : Example of a Print Quality Diagnostic report with no defects 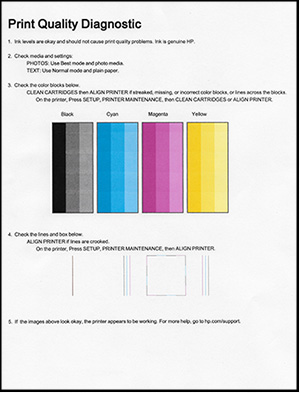 Figure : Example of a Print Quality Diagnostic report with defects 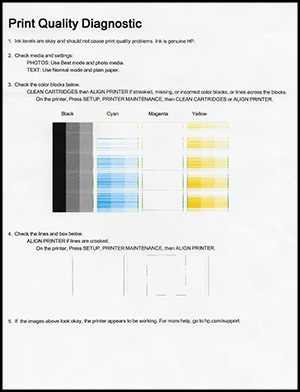 Reply with the result of the above-mentioned steps, for further assistance.

To thank me for my efforts to help you, please mark my post as an accepted solution so that it benefits several others and please give the same post a Kudos.

I have an HP office jet pro 8710 and I have cleaned the print head 3 times, aligned the cartridges and turned it off and on and still have white streaks through the whole diagnostic page from the words at the top through out.

I've noticed white lines too but with other models of HP inkjet printers that I had not printed with for a period of time.  In those cases, the ink dried and clogged the inkjet nozzles, thus resulting in white streaks.  No matter how many cleaning cycles, the nozzles remained clogged and I had to buy a new inkjet cartridge which came with new nozzles of course and that fixed the problem.  Unfortunately with the 8720 officejet pro (which I also use), the nozzles are not replaced by simply buying more ink cartridges.  It has a fixed print head and once that clogs up, it will probably need to be replaced.  I thought I saw somewhere where new inkjet printheads were sold.

Anyways, I made what I hope is a work around but it will waste a little ink.  I noticed that if the printer is power cycled, it goes though an initial cleaning cycle which means some ink will flow through all the nozzles.  To prevent myself from forgetting, I went to the On/Off Schedule menu available on the 8720's touch screen.  I then set it for one day of the week to turn off for one hour.  Then Turn back on.    That was my work around to get the printer to cycle ink through the print head at least once per week.  I will waste ink though, but if you use Instant Ink subscription, that little bit of usage won't matter.

Anyways, you have to use the print head every so often or else the ink clogs in it.  In some respects, I wonder why I got the 8720 because the lower-end model HP that I used before allowed higher resolution scanning while my 8720 is set to a max of 300dpi.   And of course, the 8720 has the not-easily-replaced print head problem if the ink clogs up from not using the printer often enough.   How often is often enough?   I don't know and experimenting would cost me a print head, ha, ha, so I am not willing to find out.

So, you can manually turn power off and then back on to force the printer to use some ink if you don't want to set the On/Off Schedule workaround trick.

A bunch of HP printers have user-replaceable print heads.  HP sells print heads for when they clog up or the nozzle drivers burn out from being worn out or attempts made to print without ink.  If you go to the support page for your printer and look up its specs, you may see an entry listing print cartridges it uses.  There may then be another entry about print heads.  For example, if you do this for the 8720 printer, you will find print head info:

So, if I had white streaks and cleaning didn't work for my 8720 print head, I'd have to buy a replacement print head at the HP parts store at https://parts.hp.com/hpparts/  for the 8720 print head which is  M0H91A as indicated on that 8720 printer head support page entry.  If your printer has a print head that isn't part of a new ink cartridge, then you'll have to replace the print head this way too.  The problem is that the replaceable print head costs so much that you might as well buy another printer.  Or better yet, switch back down to a lower-model HP that has a new print head on each ink cartridge.  You can refill ink cartridges at places such as Fry's Electronics or Costco because the laws in the Magnuson-Moss Act require that ink carts be refillable and operational with non-HP ink otherwise HP would be required to provide ink for free.