turn on suggested results
Auto-suggest helps you quickly narrow down your search results by suggesting possible matches as you type.
Showing results for
Search instead for
Did you mean:
Options
ds008420
Level 1
2 1 0 3
Message 1 of 11
30,426
Flag Post

My HP OfficeJet Pro 8710 is suddenly defaulted to 2 sided printing. NONE of your solutions in the database are fixing the problem - just like all the other people in the solution are saying it's still not fixed for them. The setup screen on the printer is defaulted to 2 Sided. It's in gray. It can't be changed. No matter what i do in any settings on the printer, computer, document program - nothing fixed it. Why is this happening and how are you going to fix it? I was printing 1 sided when i bought it!

How do I turn off the Environmental settings? That seems to be default set to 2 sided printing and i cannot remove it. Things like this make me hate greenies.

Open the file you would like to print. From the File menu select Print. The Print window appears.

NOTE: The Print window might be minimized. Click the Show Details button to see all available settings.

Click the settings drop down, it will usually appear as the name of the program (e.g. TextEdit)
Will appear as Copies & Pages within Microsoft Office applications.

Select Layout from the drop-down menu.

Set the Two-Sided option as Off.

You may save the settings as a preset by clicking Presets > Save Current Settings as Preset...

By doing so and completing the print job these settings will remain default till another preset will be used in the future.

Nope. This solution does not work. There is no printer option single or double sided printing in the HP Print options or the applications Print options.

I do notice though that these are the same instructions given to other people in the HP forum who are having the same problem as me. Aslo for them, the feedback is that this is not a working solution. I also have done restore defaults in the printer, but this has not solved the issue either.

Any other suggestions? thanks

The options should appear as described.

If not, that may due to using an AirPrint driver and not HP's driver.

Be sure to select the pritner model within the Use drop down menu, not the AirPrint option.

I take issue with your remark on 'greenies'. I consider myself one, and I can tell you it's just as annoying if you actually prefer to print double-sided and devices and software work against this or don't remember settings. And if printer manufacturers insist on letting you make all kinds of diagnostic reports with information that could just as well be conveyed via the printer's web page, and without wasting paper.

Wasting is not a good thing, though I will try to overlook the fact that you use three question marks and three exclamation marks too many 😉

I have set up several HP printers, color and monochrome, on Macs and PCs, for teachers at a couple of schools and this is driving me crazy! I spent a great deal of time chatting to an HP rep who did nothing for me (I think I knew more about printers than she did!). It has happened on nearly every computer (even PC) - only once it did not.

I have seen variations of the 2-sided problem, but no one has come up with a solution, including my chats with HP.

First, if the 2-sided option is grayed-out in your print dialog, make sure you actually have a 2-page document you're trying to print. I don't doubt you do, but that was one of my problems when I tried to trouble-shoot it the first time! The other time I've seen the option grayed-out is when I went into the printer settings (System Prefs) in Options and Supplies, Option tab, and unchecked Duplex Unit. That will turn off the option in the print dialog, BUT IT WON'T TURN OFF 2-SIDED! Ugh! (Although, on some of the printers it has - another ugh! Nothing is consistent here.) At that point, there is nothing I have found to go to 1-sided, but to re-check the Duplex Unit option in the Options tab and find another way.

Here is our setup and what I have had to do:

Our printers are manually set up with a static IP address, and I like to turn off Bonjour (and Air Print) so students can't find and print crap to them. Most all of our Macs are running 10.11; today I had this problem on a 10.12.6. And they are bound to Active Directory.

I check the web interface to be sure 1-sided printing is the default. (See 1st attachment.) That should be that, right?? Nope!

In the M652, I was able to do a preset (see next 2 attachments) to turn it off (again, I had to have a job that actually had 2 pages, and I had to make sure I didn't change the options for that printer in System Prefs). 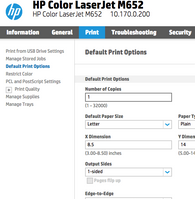 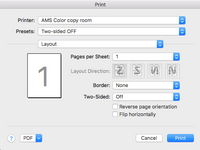 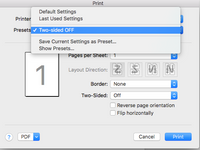 I was able to actually remove  from printer options (in System Prefs>Printers/Scanners>Options and Supplies>Options>Uncheck duplex unit. But if the person wants to ever print 2-sided, they have to go back in and reverse that if they know how.

I installed an HP LaserJet M402dne on two older iMacs. One was running 10.11 and the other 10.9. I had the same problem on the 10.11 as I had with the M652 printer - turn it off at options and it STILL prints 2-sided and no choice in print dialog to undo that. HOWEVER, when I installed on the 10.9, that same printer had single-sided as the DEFAULT, and could make the selection in the print dialog to do 2-sided.

I never had this problem until I was forced to use the Easy Print to get the drivers. I used to just download the correct driver for the computer and then it would show up when I added the printer and its IP address.

I really hope HP is listening!!

I was also plagued by this problem and I followed the steps here to fix it:

It turns out if the CUPS driver flips the switch to 2-sided at a low-level in the OS all programs will default to 2-sided printing.

I have the same Issue. I fixed it by throwing this printer in the trash.

In IOS, open Applications in Finder.  Look for HP and click down arrow.  Double click HP Utility. Find Duplex Mode and click on it.  If Enable Duplex is checked, then uncheck it.  You're done.

BRILLIANT!!! That worked! Thank you.