After posting on this board many times and reading other people's experiences of the issue - I believe I have found a more reliable software workaround as a solution for the HP Omen W006TX with the nVidia GTX 960M GPU and Intel 6700HQ CPU.

From observing gaming with Intel Extreme Tuning Utility, what appears to be happening is that THERMAL THROTTLING is engaging when a high demand on both the GPU and CPU is placed and they are at maximum performance. However, this does not necessarily occur at high CPU package temperature - whether it is actually temperature related or is tripped by another mechanism such as insufficient power only HPs engineers can figure out.

Intel's THERMAL THROTTLING mechanism reduces the the CPU frequency much more sharply than Intel's POWER LIMIT throttling - down to 800 MHz causing lagging, stuttering, FPS drops in-game. However when the mechanism functions properly, this can be avoided by undervolting the CPU with Intel Extreme Tuning Utility and by turning off Turbo Boost by downloading using the THROTTLESTOP program.

However there is an ADDITIONAL BUG with the unexpected low temperature THERMAL THROTTLING - the CPU becomes locked in a throttling mode that persists even when the machine is rebooted. The CPU will persistently try to minimize the available frequency when any load is placed on it. This makes THROTTLESTOP and undervolting INEFFECTIVE.

To remedy this, first install all the latest HP and Intel drivers from the HP website, then reboot. This resets the throttling bug. To prevent it reoccuring: Uncheck all HP and INTEL services and packages from startup and RUN>MSCONFIG except PROSet/Wireless Event drivers, the HD Graphics Control Panel and the Extreme Tuning Utility itself. Reboot and see if the problem persists using the Extreme Tuning Utility (click the wrench beside the graph to monitor the relevant parameters).

If this alleviates the major problem, please post. Re-enable non-clock interfering Intel and HP drivers as required. Post results below. 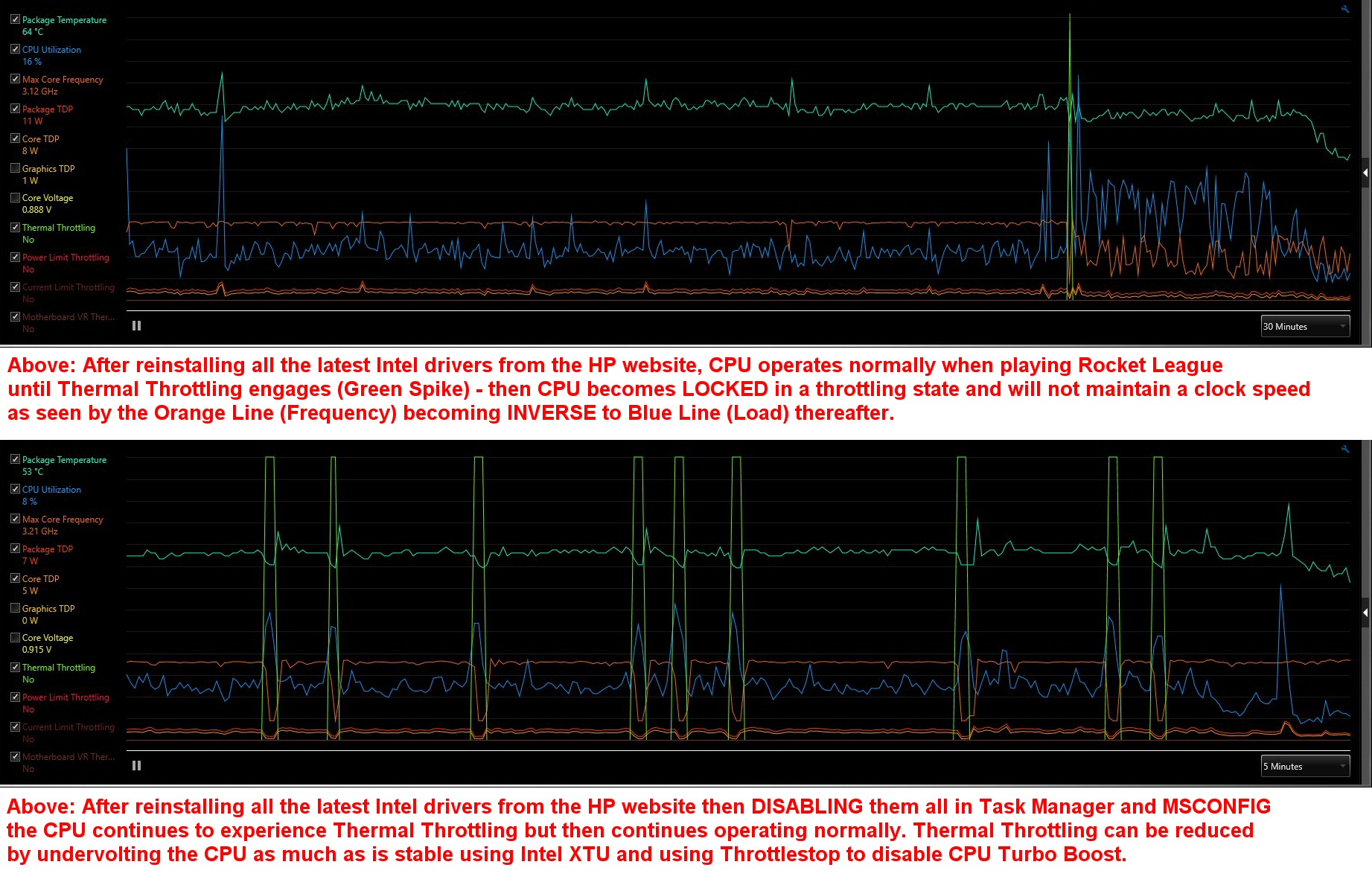 I have had this problem, but I have a solution that helped me.

So i just installed F.05 Rev.A bios and cooling system start work correctly, and i haven't throttle in games. The fps is stable. I have hp omen 17-w033dx.