I've been having sound problems for like 3 months by now. I don't know where to contact someone. I used the HP Support Assistsnt app to leave constant feedback with my issues but never got any update or fix. So I made a fix, but it's only a workaround and it just made me more problems.

In windows there is an audio service called "Conexant APO Agent" (C:\Windows\System32\CXAPOAgent64.exe)

It started to consume insane amount of CPU. My laptop was running very very hot and the fans were always very noisy. However the sound output worked and at some point sound input also worked. Cortana worked etc.

Then I decided to do something manual. I renamed that executable to CXAPOAgent64_.exe. Fortunately windows 10 let me. And finally the CPU usage stopped and the sound output still worked sometimes. After playing games it broke tho. I had to restart the computer frequently and run windows audio troubleshooter to "enable audio enhancements" all the time, then another restart is required to start some buffers. Was really annoyed by this. It's a freaking 2019 laptop and the sound system is a garbage...

I tried to do windows updates and try the  CXAPOAgent64.exe but it was high CPU. In the meantime my microphone input disappeared. Cortana and Skype and Discord.. nothing works with audio input now. The build in microphones are unusable.

What should I do to make sound work again? Reinstall the whole windows 10 and start from scratch? Buy a new laptop? Bring the laptop into a repair store?

Also is it okay that the fans never stop spinning? Even if i close all applications and don't use the laptop the fans are spinning. I installed QuickCPU app because the HP applications (including HP Command Center) nor Windows 10 power plans (which are basically got removed from the OS completely) doesn't allow me to control my CPU boost frequency and stuff. I tuned everyting down to minimum using QuickCPU app yet my fans are still spinning.

Now I renamed the CXAPOAgent64.exe back to make some screenshots and now I am getting blue screen of death with driver power failure error messages.

Also here are a few screenshots from the task manager: 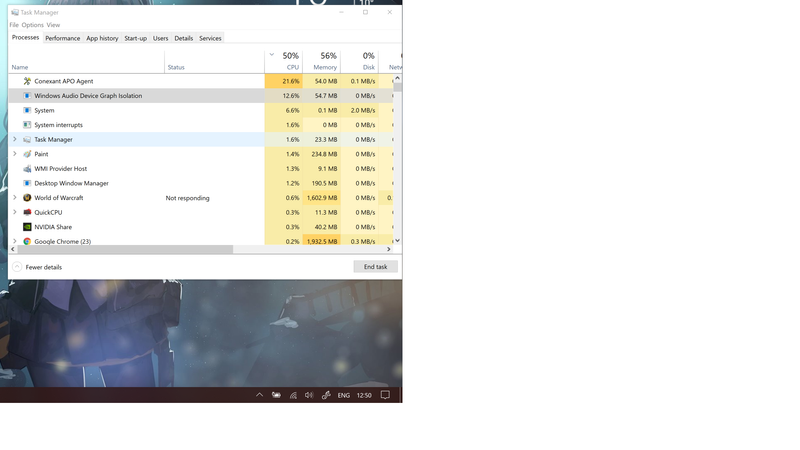 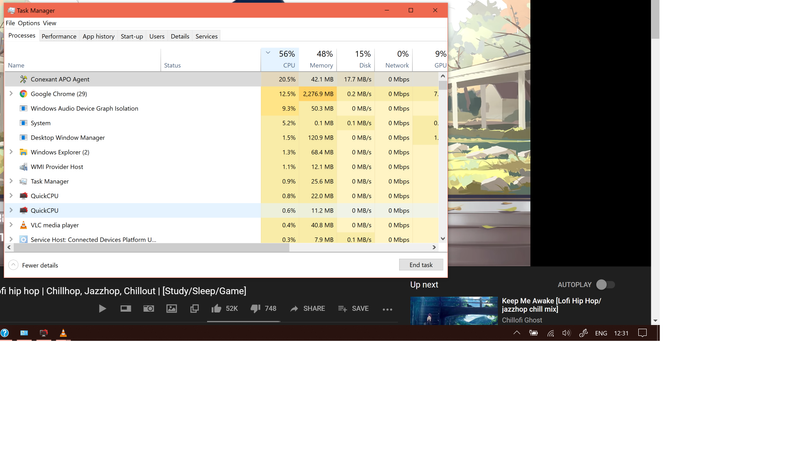 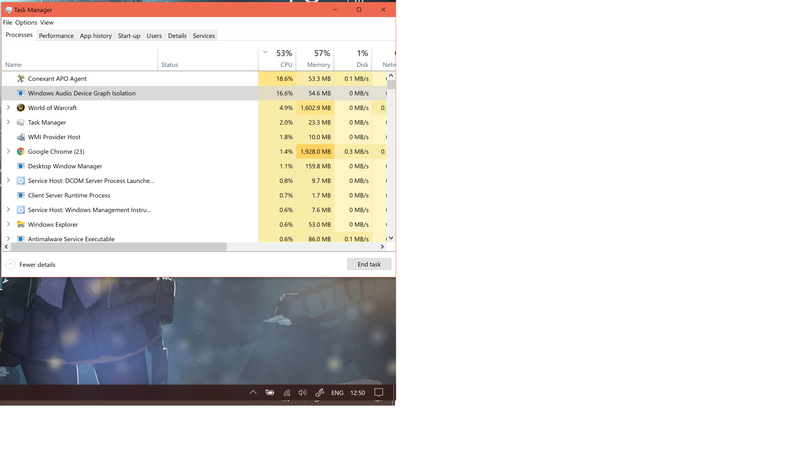 I think I'll have to reinstall Windows 10 😕  Maybe then my audio drivers won't consume more CPU % than World Of Warcraft and other games. 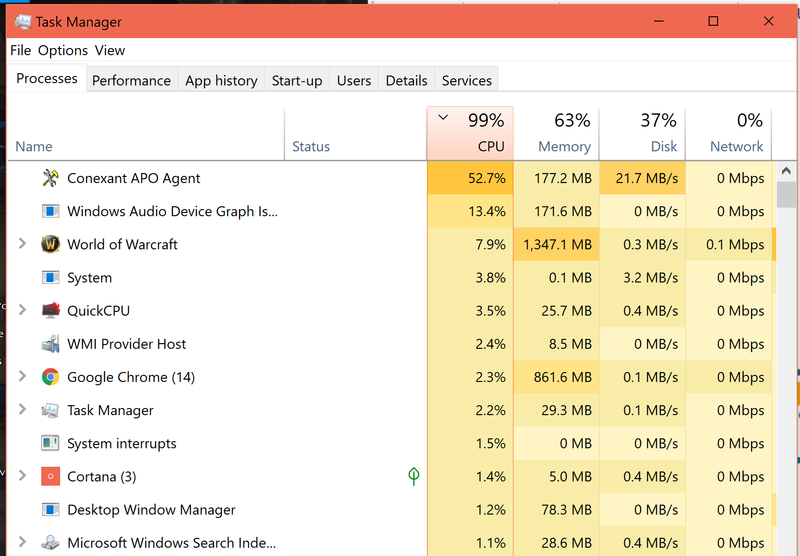 Even my browser is lagging as hell. This audio system is so broken on this laptop....

@Balazs_Spectre I recommend you update the BIOS, Chipset and Audio drivers using the HP website: click here to find and install the same, if that doesn't do the trick I suggest you create a backup of all your personal data and create a new user account, if the issue persists, perform an extensive hardware test to identify any hardware malfunctions using the below steps:

Install the latest version of the HP Hardware diagnostics (UEFI) on your device using this link: Click here for details

If a component fails a test, write down the failure ID (24-digit code) for when you respond back to us.

I have the "HP Support Assistant" app installed. I tried to update bios and drivers numerous times. 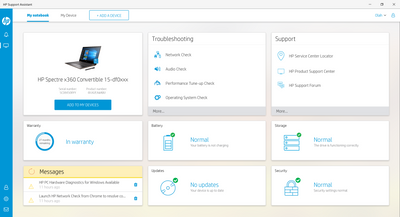 I've also tried to install the "HP PC Hardware Diagnostics Windows" app that redirects me to the Windows Store but it always said to me that this app is not for my laptop...

I did the "Extensive Test" with "Loop until error" option. I let it run for 6 hours. No issues were found.

@Balazs_Spectre I suggest making use of the HP Recovery manager, to reinstall windows as the registration key is inbuilt on your device: click here for details.

And Its a good thing the hardware tests passed, as this confirmed that there are no major issues, just a file corruption or system file failure, that should be resolved once the OS is reinstalled. 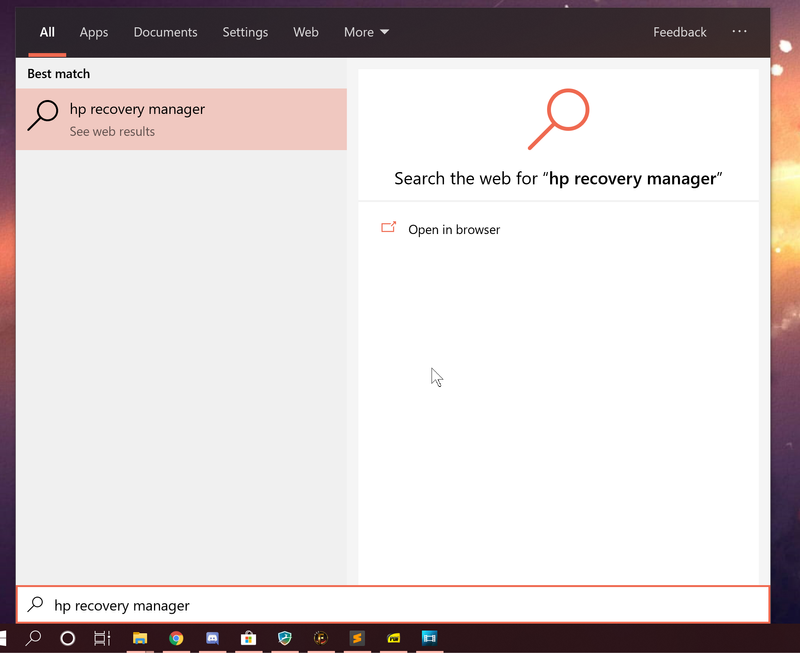 Where can I get it?

@Balazs_Spectre If you don't have the recovery manager, it means you have the latest version of windows installed, and also, that it can be downloaded using the steps in this link: click here for details.