It has been a while since anyone has replied. Simply ask a new question if you would like to start the discussion again.
whiggs
Level 2
17 13 0 4
Message 1 of 2
1,315
Flag Post

I am very disappointed in you, HP

Lets start with the BIOS updates You will see that there is a BIOS update which was "recently released". 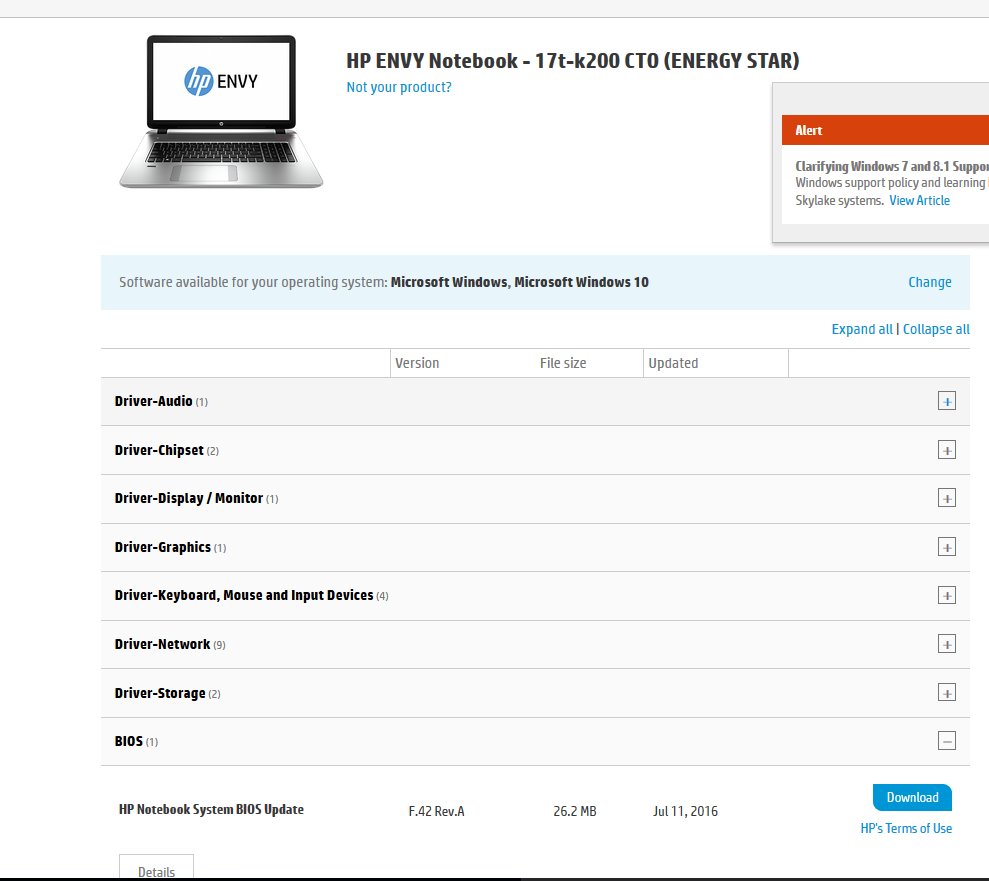 But this is a laughable trick that is pretty easy to see through for those who know what they are doing.  Take a look at the following picture, which is a snapshot of the Window which appears after the "wininfo32" command is launched, and concentrate on the indicated information in particular: 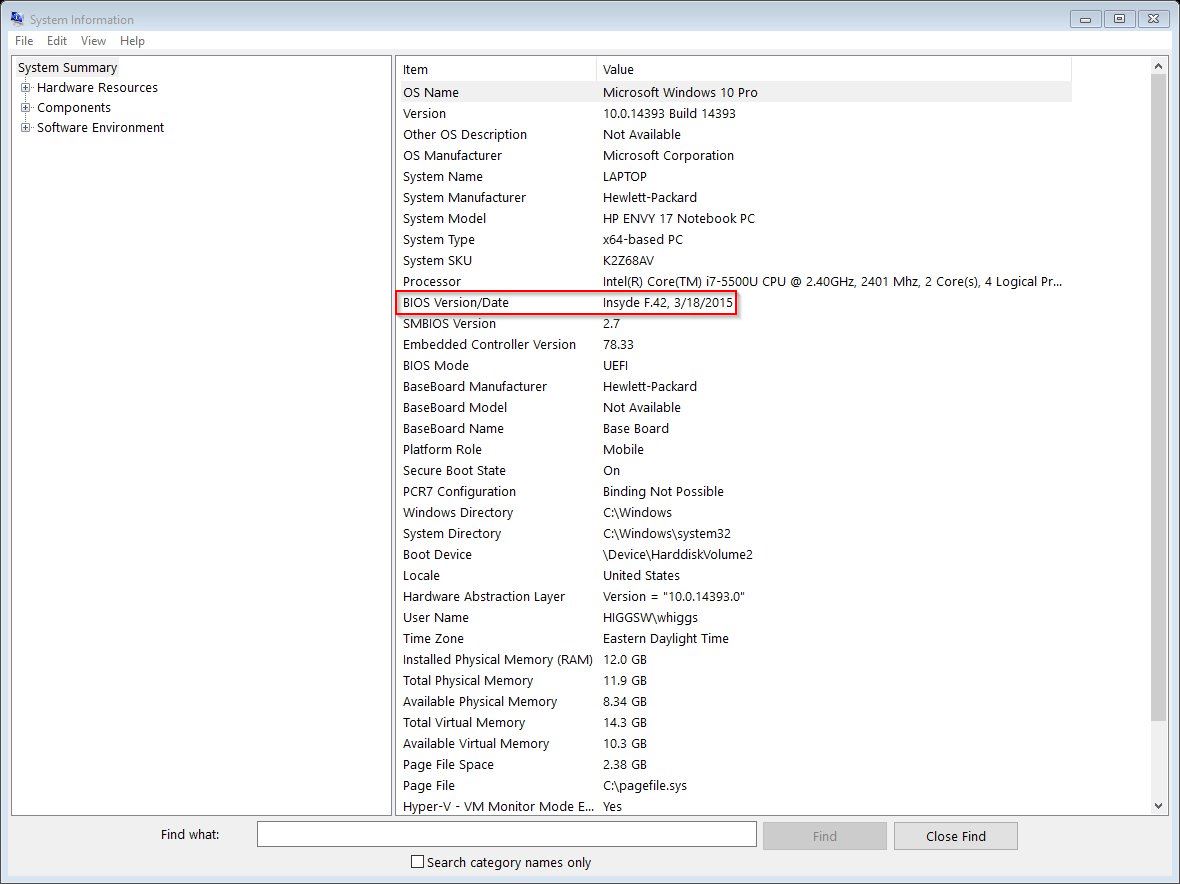 Show Of hands, who caught the discrepancy?  How is this in any way, shape, or form a new freaking bios update and why was it only just recently put on the Windows 10 driver download selection when it has been available on the stock os version’s software download page for a year?!?  Pretty freakin obvious huh?!?  But I'm nowhere near done, so lets continue.  How did I discover this?!?  The answer to that leads me to complaint #2 of a very long list of grievances: when the hp assistant is downloaded for this particular product and updates are searched for, if one were to make the foolish mistake of actually believing what they see on the driver download page and installed the bios update listed there, then you will probably see a screen very similar to the one below:

See what happened there?  I don't really care if the product page is displaying an old driver (well that much is already obvious, see above pictures if you forgot) or the Support Assistant is recommending an incompatible BIOS update for my device, both are controlled and managed by HP.  Oh, and here is probably the best part.  Lets take a look at the information about the support assist BIOS version as returned by the "msinfo32" command: 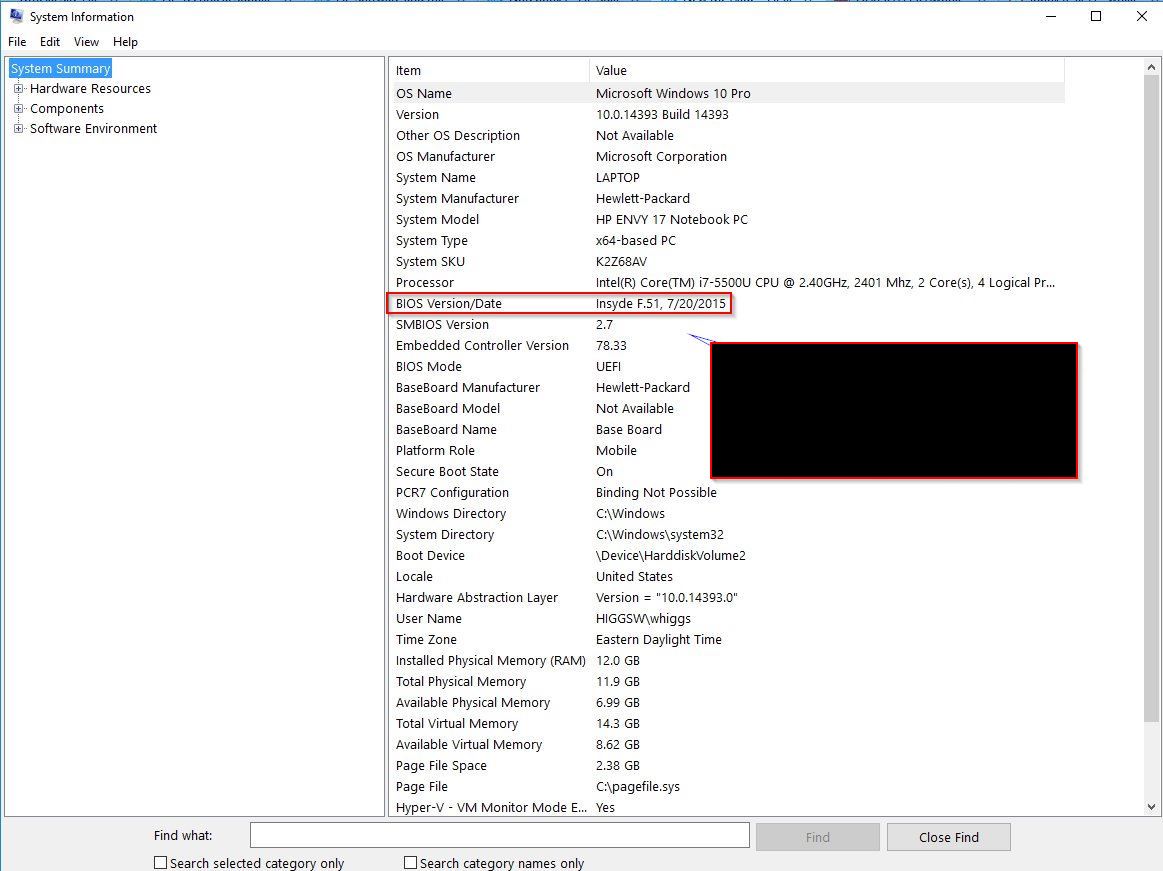 For those of you who have already forgotten, the very first image shows a snapshot of the "current BIOS firmware" that should be installed for Windows 10 devices.  In summary, NOT ONLY HAVE YOU BLATANTLY MISLED YOUR CUSTOMERS INTO BELIEVING THEY ARE GETTING AND INSTALLING AN UPDATED BIOS THAT WILL BE COMPATABLE WITH WINDOWS 10 (its the same version as the bios software they offer on the Window 8.1 page, lol), but the last time that you have so much as released any update to the BIOS for this device was over a year ago

So, down to the main issue, the incompatibility with Windows 10 Anniversary edition, which would go against the announcement you made on your page (http://support.hp.com/us-en/drivers/selfservice/HP-ENVY-17-k200-Notebook-PC-series/7527536/model/775... ) that this device was tested and confirmed compatible.  Well, HP, get ready to eat your words.  Even after all driver updates are installed (did a clean os install 3 TIMES BECAUSE OF MULTIPLE DRIVER ISSUES ENCOUNTERED, Including an issue with the GeForce video card which causes the screen to turn black and flash the mouse curser during the installation, and tried multiple different configurations to resolve this, but nothing worked), there is a major INCOMPATABILITY with the new version of Windows 10 that was released regarding sound latency , as I can confirm with 100% certainty that it did not occur in the last version of the os.  I noticed that the simple act of listening to “Spotify” on my computer would cause the audio to “repeat” the same audio segment repeatedly, like what you would here if listening and a lot of the computer resources were being used.  Thing is, these are BRAND NEW OS INSTALLS with all drivers from hp and windows update installed!  There is nothing consuming the resources.  To troubleshoot (I work in IT if you haven’t figured it out yet), I download and installed LatencyMon from Resplendence software to pinpoint exactly what was going on.  What do you think I found when I launched the tool, HP?: 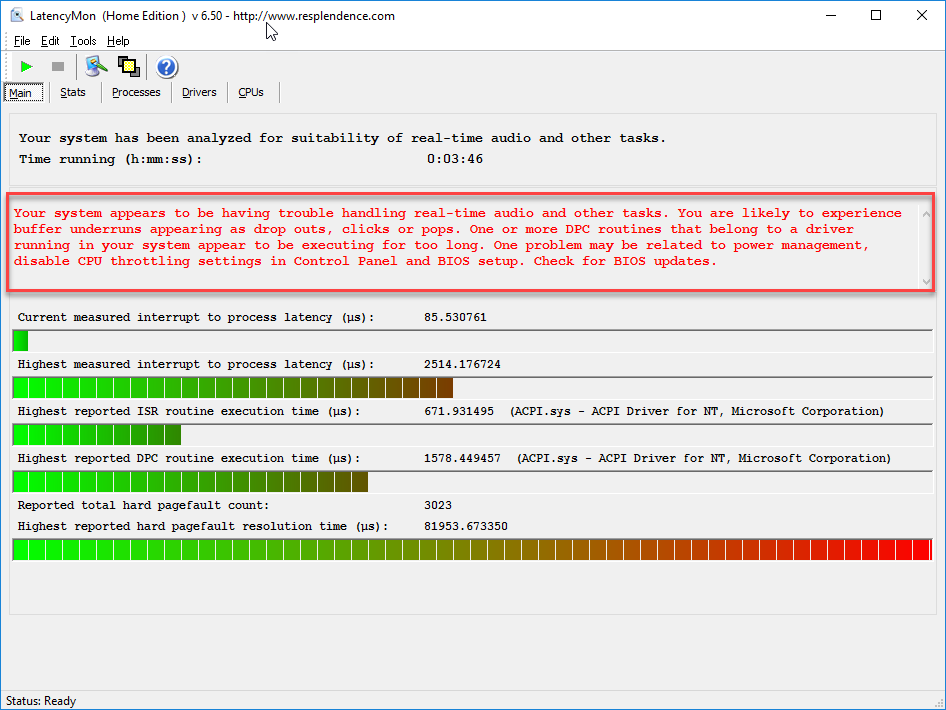 Does these results indicate device compatibility to you??  So how about we go about a fix for the very much incompatable product, as I am ashamed enough as is that my only one year old laptop cannot use the latest verison of the operating, and I'm furious that you, HP, as a company would try to blantantly lie and spit in my face.  Here is some more info from those resplendence testing results.  Feel free to let me know when there is a fix available.  I'll be waiting./

Your system appears to be having trouble handling real-time audio and other tasks. You are likely to experience buffer underruns appearing as drop outs, clicks or pops. One or more DPC routines that belong to a driver running in your system appear to be executing for too long. One problem may be related to power management, disable CPU throttling settings in Control Panel and BIOS setup. Check for BIOS updates.

LatencyMon has been analyzing your system for  0:03:46  (h:mm:ss) on all processors.

The interrupt to process latency reflects the measured interval that a usermode process needed to respond to a hardware request from the moment the interrupt service routine started execution. This includes the scheduling and execution of a DPC routine, the signaling of an event and the waking up of a usermode thread from an idle wait state in response to that event.

Interrupt service routines are routines installed by the OS and device drivers that execute in response to a hardware interrupt signal.

DPC routines are part of the interrupt servicing dispatch mechanism and disable the possibility for a process to utilize the CPU while it is interrupted until the DPC has finished execution.

Hard pagefaults are events that get triggered by making use of virtual memory that is not resident in RAM but backed by a memory mapped file on disk. The process of resolving the hard pagefault requires reading in the memory from disk while the process is interrupted and blocked from execution.

NOTE: some processes were hit by hard pagefaults. If these were programs producing audio, they are likely to interrupt the audio stream resulting in dropouts, clicks and pops. Check the Processes tab to see which programs were hit.

I am very disappointed in you, HP

Since my previous post was locked, I will post the results from another resplendence tool, WhySoSlow, in this new thread.  Learn from your mistakes HP.  Don't sweep them under the rug or blame someone else.   Such behavior is very immature:

The highest measured SM BIOS interrupt or other stall was 316 microseconds.
This is considered poor behavior. Your system may have difficulty handling multimedia in real-time and may be subject to unexpected stutters and unresponsive behavior.