Elitebook 840 G2 does not boot from NVMe; detected in OS; boot enabled

I removed the SATA SSD from my Elitebook 840 G2 (P4C18UC#ABA) and installed a Toshiba RC100 in the M.2 slot, but the drive does not appear as an available boot device. However, the drive is detected when booted into Windows (both, Windows Setup and Windows 10 off of the SATA drive). 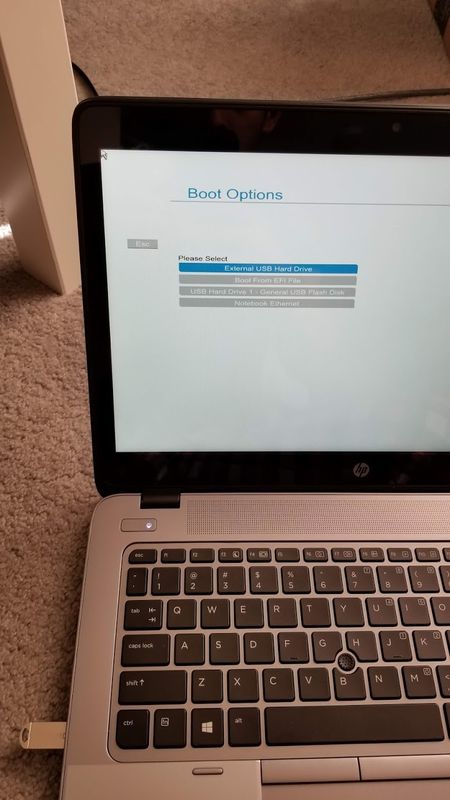 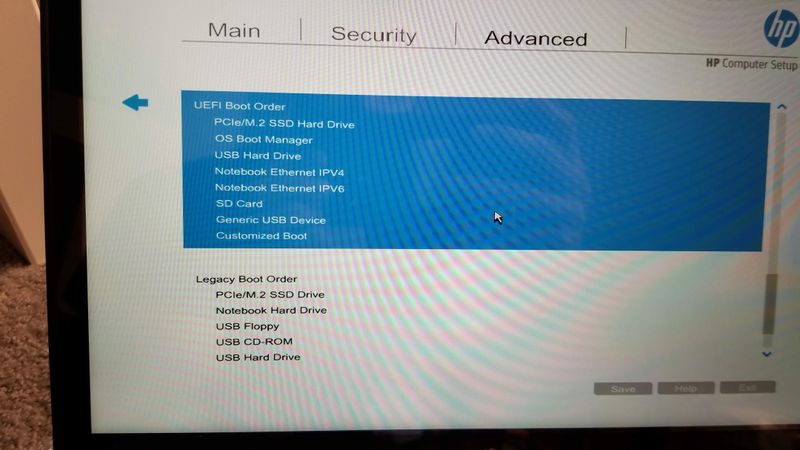 Boot order has M.2 at the top 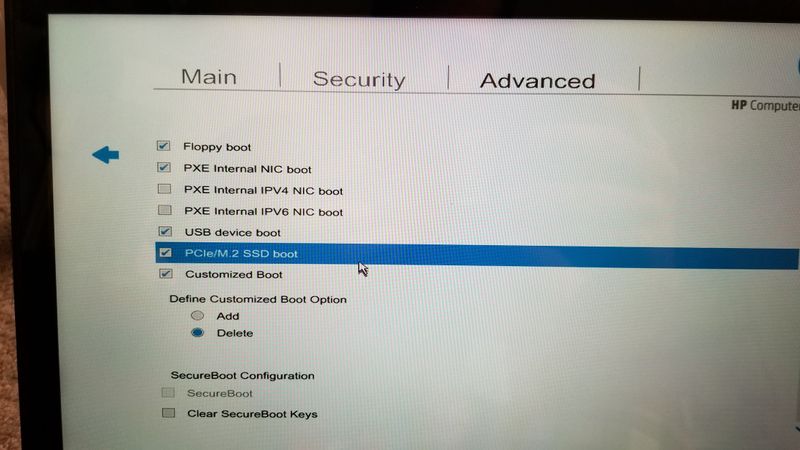 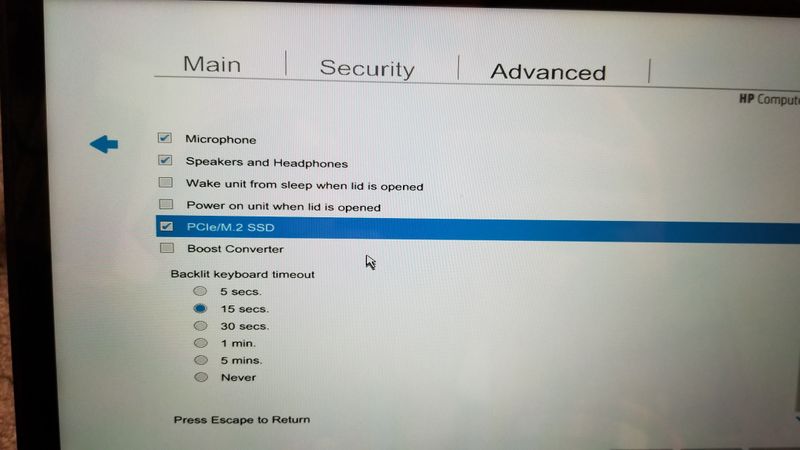 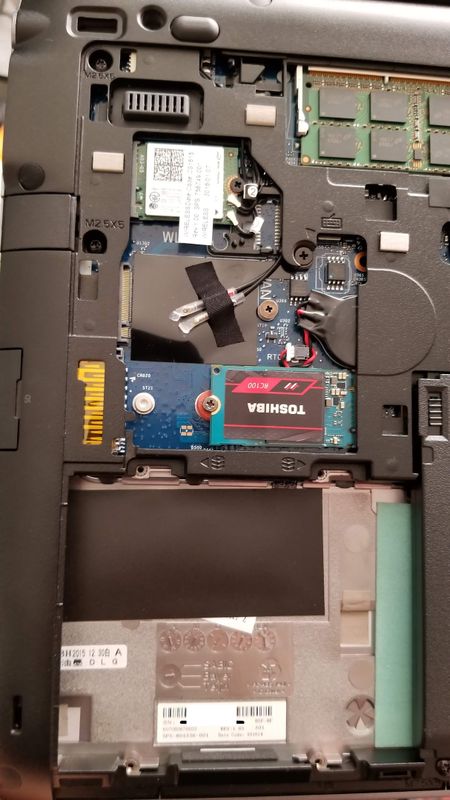 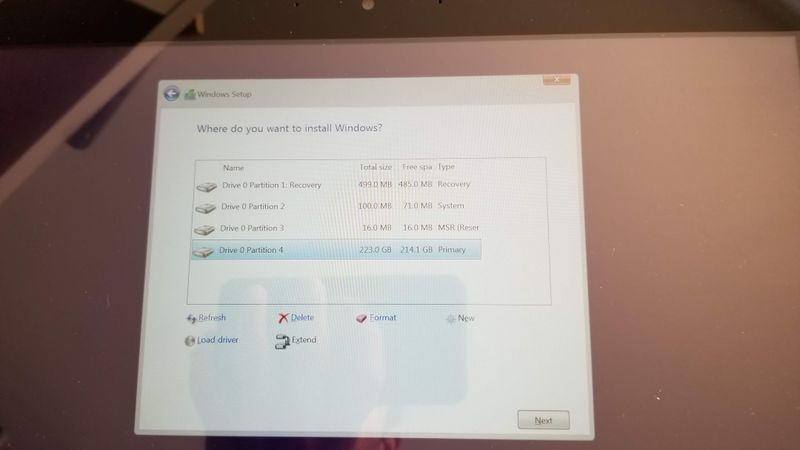 Drive is correctly detected in Windows

I tried the new Toshiba SSD in an another laptop (Elitebook 840 G4), and it boots successfully. I also tried the G4's SSD in the G2, and the G2 did not boot from it (does not appear as a boot option). Therefore, evidence suggests that something is wrong with the boot settings in the G2 (since physically/electrically, it appears okay). 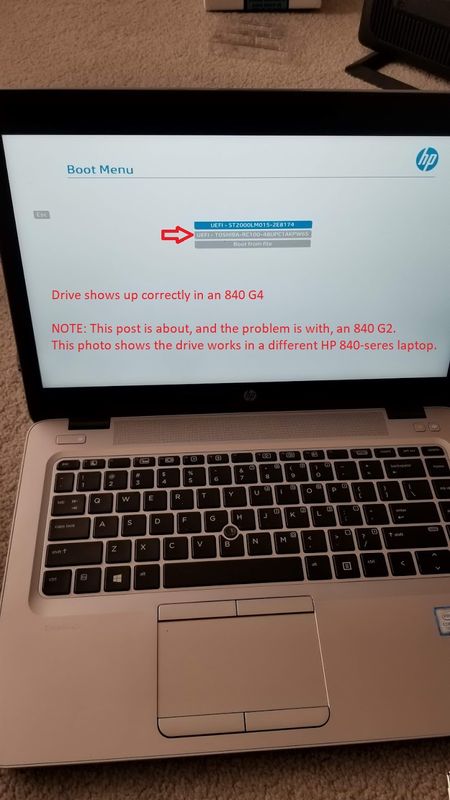 The drive boots properly in an 840 G4

The plan is to put an HDD in the SATA slot for photos/videos, and run the OS and applications from the SSD.

How can I get the laptop to boot from the M.2 drive correctly?

I have that same problem. I bought Toshiba RC100 M.2 SSD but can't use it. Can somebody answer, please?

I contacted HP Support, and as of 12 days ago, they have no idea. I sent them a diagnostic file that they requested, and they "shall keep you updated in the following days." Considering the experience I had just trying to explain what the problem was, I have no hope that they will provide something useful.

I also tried another 840 G2, and it had the same symptoms.

Therefore, as it is now, the 840 G2 appears to only support booting from the SATA drive, but the M.2 drive can be used after booted into the OS. This goes against HP's documentation and apparent BIOS settings, which says the laptop supports booting from M.2, but...meh.

I gave up and bought an 840 G3 instead for ~$400 from Craigslist, which works exactly as you'd expect and already had an M.2 drive installed. It also supports the much more common 80mm drives, whereas the G2 only supports 42mm and 60mm drives.

Thank you for the information. [content removed] They trick people. I bought the computer and Toshiba OCZ RC100 240GB ssd for this option.

Any solution known yet?

Nope; HP never got back to me, despite them saying they'll escalate it to an engineer, and me providing the diagnostic logs/data they requested.

I've never followed-up because I got a different laptop.

Not sure what happened with the other user.

That's a shame... Lousy service though. The mentioned laptops are business grade and had a hefty retail price so you would think they'd do something with this issue.

Thanks for your reply though 🙂

from what i can understand its problem with mbr and gtp problem just delet all the partions on the drive and try to install on unlocated drive it will work ... that how i do it

The issue is that on the 840 G2, the BIOS doesn't even look at the NVMe drive for an MBR, to attempt to boot from it. It only checks the SATA drive for an MBR, despite having the NVMe boot option enabled and having it as the first device in the boot order.

Greetings from Middle Earth. Better late than never I come from Rivendale with great tidings and also a possible solution. I dwell in the valley of Hackintosh and use the green and fertile Clover to boot my EliteBook 850 G2 NVME drive. Since you have a SATA drive installed simply install Clover to the EFI partition of the SATA drive boot from the SATA drive and once Clover loads it should give you the option to boot to your Windows NVME partition . Let me know if that works for you. Btw Elrond says hello.