A thread I'd found had said some older AMD HP laptops has issues updating past that version with Windows until a BIOS update was applied, so I download and ran the latest BIOS update for this model from the HP support page for this laptop. I followed all the instructions to the LETTER because I know what BIOS updates can be like...

....and now the laptop is bricked. I turn it on, I get no POST and a black screen and then after 30 seconds or so, it shuts off. I tried to set up a 32GB USB stick as a recovery drive, but I can't even get the laptop to boot up to the USB stick by pressing the supposed Win-B or 4-arrows key combos with the power button to try a BIOS recovery. It shuts off very quickly after I try turning it on sometimes, or it shuts off after a bit with a 4.2 capslock LED flash code....which is thermal....which makes no sense because the air coming out of the laptop is cool, and the temperatures were checking out in Windows just find before I did the BIOS update. The non-boot, no-POST only started after I tried running the BIOS updater.

Any idea how I can get this thing working again? 😞

Let's start by setting things straight -- there is no released 21H2 version available right now.  The only released version is 21H1 -- and even that has issue because HP has not been providing driver updates for it. So if this was mine, I would not install anything newer than the latest 20H2 version -- 19042.1083.

And ... if the BIOS update you forced bricked the laptop, then you are in serious bad shape -- as the BIOS chip is soldered to the motherboard and is not replaceabe.

You can try the WinKey+B route to to see if that will restore the prior BIOS code, but if that does not work, you are stuck.

Sorry, I meant to say 20H2. The entire reason I was doing the BIOS update was to see if I could get that update to install for Windows because no matter if I was using a Windows Media Creation Tool USB, or through the downloaded Windows Upgrade Assistant, the PC would go the entire way through the 1909-to-20H2 upgrade process....and then promptly fail the update, despite me having done a disk check, running sfc /scannow and going through the DISM repair commands.

So, short of having to reinstall Windows and back up / reinstall all their files and programs, I did the BIOS update (I have done them hundreds of times on many different machines after following the specific instructions to the letter, and this is the first time this has happened to me) and yeah....now the thing won't boot or POST at all...

I just get a 4long, 2short capslock LED flash, which, according to HP's site is a CPU overheat thermal condition, but I know the fan works, the vents are clear and the temperatures were fine beforehand, so why is it giving that error code? It's NOT overheating...

Would clearing the CMOS by removing the RTC battery make and difference?

WELL then, here's an insane update...

The BIOS update bricked it...ISH. It had been acting a little weird, but the temp. readout was showing as OK (high...but OK), as I had mentioned. But I think the temp probe readings were wrong, BECAUSE, I decided to open it up and see if anything was amiss, and found this... 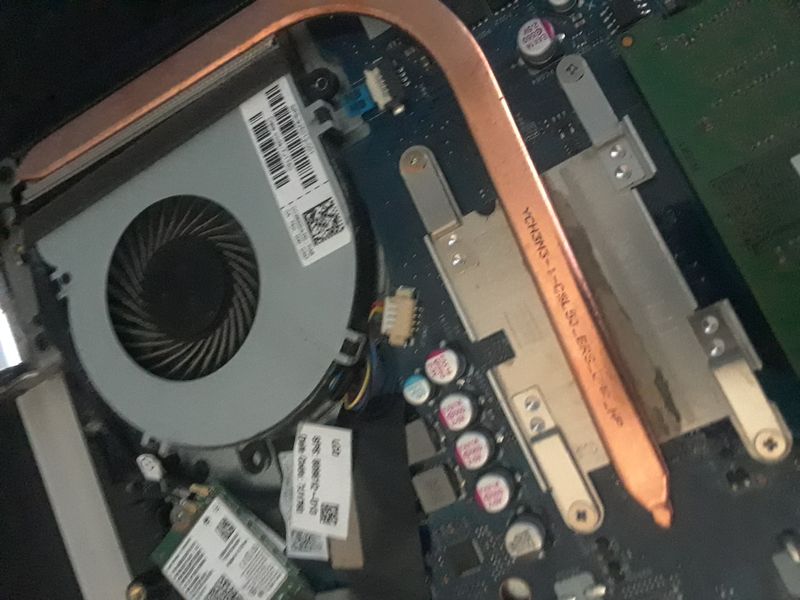 Anything odd about that heatsink? 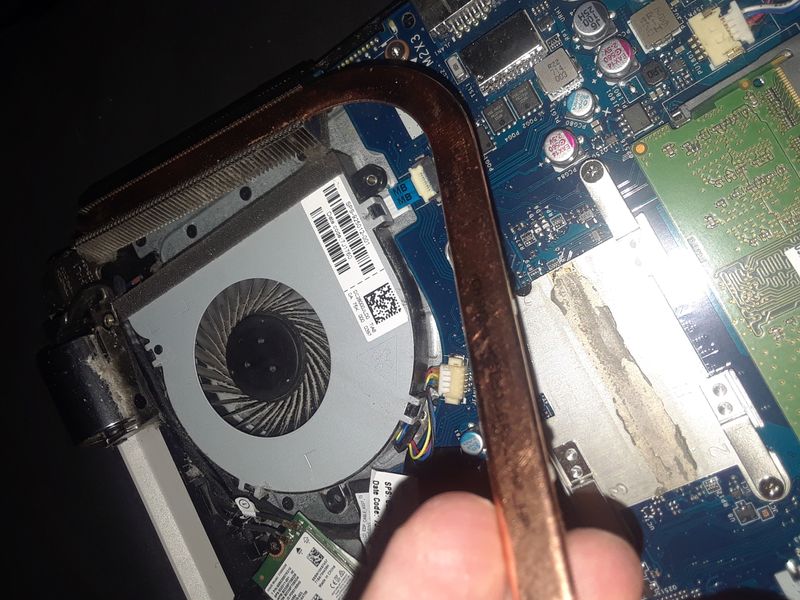 I had heard a weird metallic jiggling when I was opening the casing with my spudger and found that the copper portion of the heatsink that carries heat away to the fan was NOT ATTACHED ANYMORE. I've never seen this before in all the computer work I've ever done....so the reason the BIOS update failed was because the CPU overheated and thermal protection shut down the laptop IN THE MIDDLE of the BIOS update......

So now I'm at a loss as to what to do.....because the heatsink somehow decided to separate itself, I'm now left with a bricked laptop 😞 - it's in pristine shape, otherwise, no cosmetic damage, no nicks or scratches, no nothing. This is an elderly couple, so it never leaves the one desk they use it on, so this couldn't have been caused by mistreatment...

Guess I'll see if I could find a replacement motherboard for it...

Replacing the motherboard is a really bad idea ... Before you spend any money to attempt to replace the HP motherboard, you need to be aware of the issues involved with doing that.

If you are planning on replacing it anyway, then see if the small metal plate with 4 screws that was under the heatpipe is easily removed.  If it is, then remove that and see if you can find someone to solder the heatpipe back to it, and if that is done, then reconnect the plate and heatpipe to the laptop.  That should then overcome the heating issue.

But I don't know if that will fix the booting issue -- it's just something to try.

The laptop is out of warranty regardless, so buying used parts is far cheaper than buying new. Also...

"Also, the licensed Windows version that came preloaded on your PC is an HP OEM Version -- and that license is tied to the original motherboard, not to the PC owner. When you toss away that motherboard, you toss away the license -- and HP will not provide you a second license. Since the versions of Windows you can buy will not activate with the embedded HP OEM license, you will have to buy a Retail version of Windows, and a license to go with it. You will then have to replace the installed Windows version on your laptop with the version you bought and license it. We are not able to assist in any of that work."

But if the license key is embedded, then the replacement motherboard I get will also have an embedded license key and I wouldn't be reinstalling Windows, I would just be installing the current functioning hard drive back into the laptop with the new motherboard, so Windows should auto-activate with the license embedded in the new board, should it not? The key in the new board is a legitimate key, so Windows should just activate with it...?

Just make sure you buy a replacement motherboard that has the embedded product key.

You may still need to activate windows and if you do, then change the existing product key for the one in the new motherboard's BIOS.

You can install the free showkey plus utility from the Microsoft Store, and use that to see the OEM product key in the BIOS and then you can change it in the PC settings menu.

You'll just have to make sure that the motherboard you buy has an embedded product key.

The parts list for your notebook has the two supported motherboards--one with an one without the Windows key.

HP does not sell the motherboard.

Thanks for the reply, and thanks for confirming my thoughts!

Yes, not cheap sadly, but cheaper than a new replacement laptop with the way prices for them are these days with the chip shortage and the like.

Would this board also work? It's technically a different part number, but also ends in '601', so assuming an embedded Win10 key? The board layout looks exactly the same and it has the same other part number on it as the boards we were discussing earlier (i.e. LA-E831P)...? Assuming it's the same board, just with an A10 CPU instead of an A12?
https://www.ebay.ca/itm/274835906428?hash=item3ffd7f1f7c:g:KLAAAOSw4MBgypB9

Thanks for your help too @WAWood !

Here is the link to the service manual.

Chapter 3 has the list of supported motherboards for the model series.

The board on the eBay link you posted is listed as supported on page 19, toward the bottom of the page.

Again, thanks very much for the help!

So, the board I linked would work as well then? That's good to know....she doesn't mind if it's not quite as powerful as before...it's the wife's laptop and all she uses it for us Facebook and email, really...