For a more open discussion I suggest going to the subreddit I moderate, reddit.com/r/spectrex360 . Credit goes where credit is due, the 2016 Spectre x360 was named by theVerge as the best Windows laptop of 2016. However, I feel that a lot of customers are going to be disappointed by the reliability of this laptop. It's a shame that they're not building goodwill in this community by offering replacements and would rather shed the customers that took a chance on their new line. These are the customers that become evangelicals of their laptops. For example, I was so excited by this laptop when I first received it that I started the spectrex360 subreddit. If they are really looking at the cost-benefit of replacing these defective motherboards I think the answer is clear: low cost to replace (BOM cost), they gain returning customers, they save their or improve their reputation, and gain more word-of-mouth advertising.

Hey @firstapex88, glad to see you here. I guess we are among the earlist buyers of the spectre x360. I was actually super exited about this laptop at that time.

so while searching around, I found two 1-star Amazon reviews for the refirbished spectre x360, where the buyer posted pictures of inside the laptop, and described the same problem as we experienced: sudden death, no power, no led.

In their pictures, the motherboards are burnt at the exact same spot. Right next to the screw that next to the SSD slot. These poor guys bought it refurbished, with only 90-day warranty...

oh well, another one picture from the forum, a different case as the poster said he bought it new in 2015, motherboard burnt at the same spot :

Another from an honest ebay seller:

I remember I did smell something strange from the vent when my laptop failed.  Didn't pay much attention since normally electronics do produce some strange smells when heated up.  If I had torx screwdriver, I can probably contribute to the library.

@louis25th, thank you for these links. Very interesting.

Almost immediately after powering on the laptop, all of the six largest chips in that area became hot to the touch and remained warm with the machine powered on. A contactless IR thermometer reading was about 40 degrees celsius but this is an average over an area larger than the chips themselves. Note that those components were hotter than the CPU heatsink most of the time.

There are two types of chip, as shown in the image below. A search for part numbers "V1595S" and "FN02GP" revealed no datasheets, nor did "EGL1175", but I would imagine they have something to do with voltage regulation for the CPU. 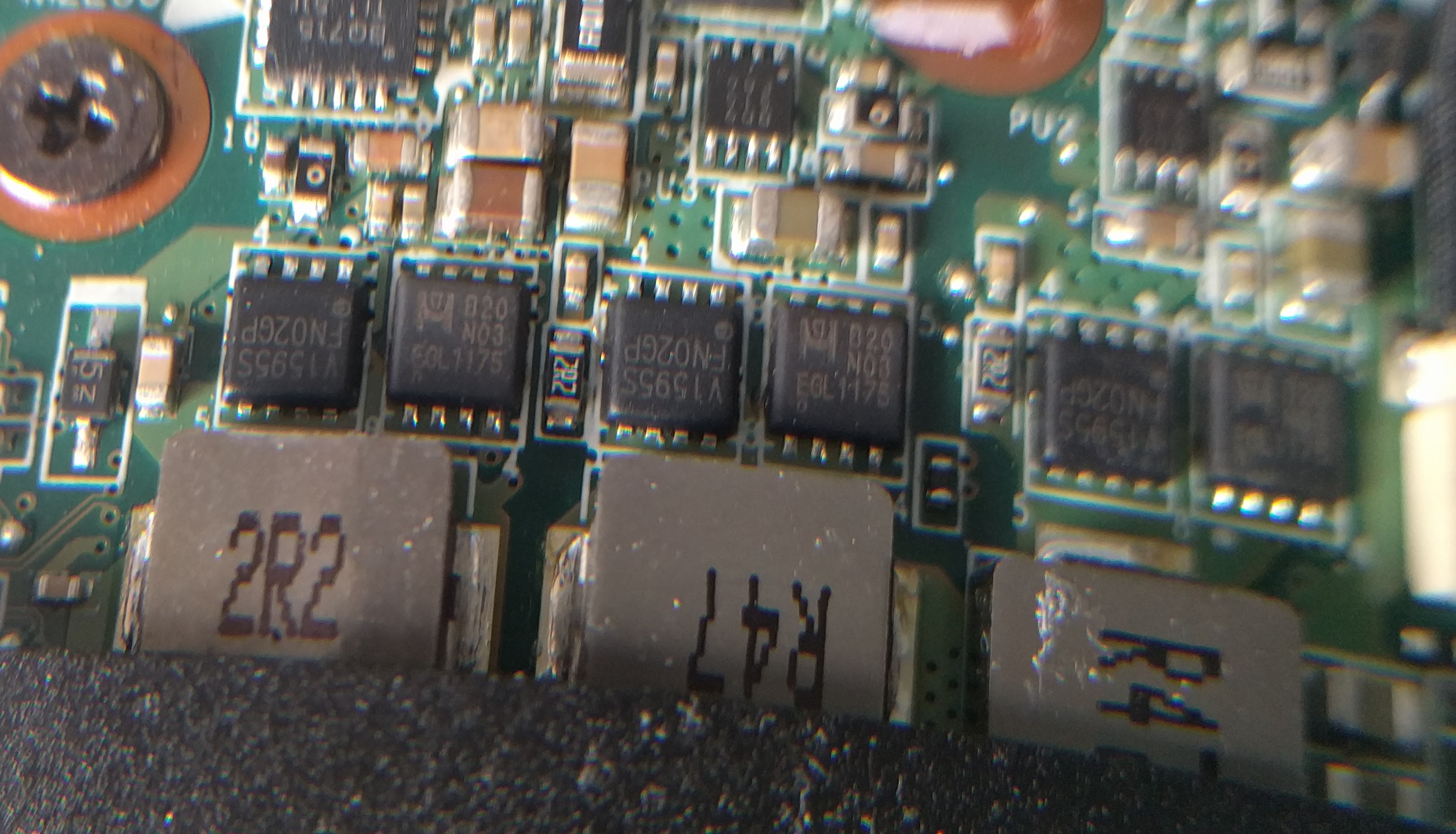 It seems that under normal circumstances, the temperature of these parts would be below their thermal limit, so perhaps a voltage spike or lack of airflow is to blame for their burning up? Or perhaps their burning up is a result of a different failure, a short circuit or something else...

I might try to find some thermal adhesive and heatsinks small enough to cover the chips, or thermal pads that will bridge the gap between the chips and the aluminium of the outer case. Anyone have ideas on what to use?

Further to this, perhaps if your device still has the sticker over the top... take it off!

Thanks for your advice. Couldn't see your picture though.

Usually when a integrated circuit device fails due to heat, we can't even tell from outside, because the failure temperature of a semiconductor is much lower than the melting temperature of the packaging material. Such brutal burn out is really rare.

To burn through the typical packaging material of an IC, the temperature need to be at least 200℃ or ~400℉(in comparison, the melting temperature of most solder is 188℃ or 370℉, the packaging material needs to be capable of handling the solder melting temperature, which makes sense). I agree the sticker on them could contribute so some heating issue as it traps the air around the chips, but I can't imagine it making such huge difference. There isn't much airflow in that region anyway.

The image is appearing for me, not sure what might be wrong there...

In some of the fault images, there was a third chip that was burned out, in the top left of the image I posted. This chip was not as hot as the other six in my laptop.

As you say, @louis25th, the chips would need to be really hot to be burning out, certainly they were not this hot when I touched them in my device. This would imply a separate fault to cause the temperature in the chip to rise enough to burn through the packaging.

My doughter recently suffered from the same issue. She bought the laptop in August 2015 for her master degree program she attending abroad and the laptop died just as she started the work on her thesis. She is trying to recover the data from the laptop and I am not even sure were to start to fix the Spectre x360.

The good thing for me, the first time it happenned, was that when they replaced the motherboard, all the data and apps were still intact on the hard drive.

If she doesn't get it repaired, she can probably remove the harddrive (it is just a small card) and move it to another device to access the data.

Shipping the laptop via a courier services from where she is will cost almost $200 one way and my unedstanding is that replacing the motherboard will cost another $500 as the worranty run out on September 4th. Spending $900 to repir the laptop without knowing when it will be fixed does not seems a good option so I am trying to send her a replacement laptop asap.

She did went to a local shop to try to get the data out, but that shop even did not had a proper screwdriver to open the laptop, not to mention the m.2 adapter. She is still looking for the options.

To those with burnt capacitors or IC's, can you check if the DC power input jack wiggles?  The power jack looks like this: 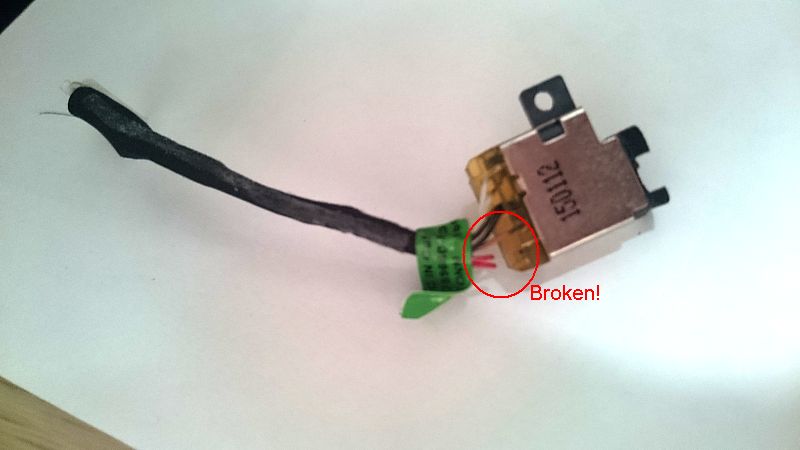 It is where you insert the power plug. If it wiggles, there is a possibility that the electrical short is initiated from this jack. Short circuit could have happened here as the wires break due to poor mounting of the jack.

To those who have not experienced the IC burning yet, make sure to check this jack first!