Good morning, I am writing to ask you for help. The battery of my laptop model: 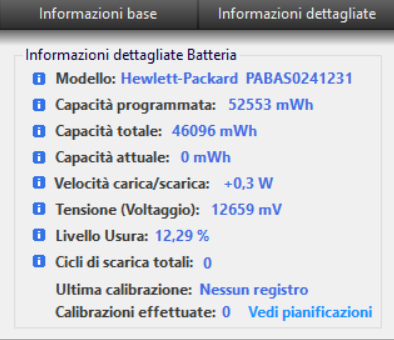 no longer charges. I explain what happened: One evening I was using the laptop while keeping it charged because being a gaming laptop it only exploits maximum performance when it is plugged in and had a 100% charge. After I finished what I was doing I put it in suspension and left it like this, by mistake I unplugged the power strip and forgot about the computer. the next day trying to turn it on I noticed that the charge had dropped to 0%. I let it charge for half an hour but with surprise trying to turn it on the laptop was still at 0% and going with the cursor on the battery symbol I was presented with the message Battery 0% available (connected). At that point I tried everything I could, updated the drivers, removed and replaced the battery with some methods found on the internet (yes to remove the battery I had to disassemble the laptop) to understand I tried everything but nothing. doing the test with hp support it comes out that the battery has to change and doing the component test entering the BIOS comes out the message: Fuse tripped. The AC adapter is alright so the problem is in the battery. Looking a bit I was able to find the days of battery life (About 800) and also the following information with the Battery care program